Green onions (also known as scallions) are a type of onion that is harvested before the bulb forms. It is usually harvested in early spring and is available year-round. Green onions are used in many cuisines around the world.

Green onions are a type of onion that grows in bunches. It has long green stems and leaves. These are used in many dishes such as salads, soups, stir-fries, sandwiches, and appetizers. They are usually chopped into smaller pieces before being added to dishes. The flavor of these vegetables can be mild or strong depending on how they have been grown.

Looking to make that delicious summer salad but don’t have any green onions? It happens to the best of us, but it’s nothing to be concerned about. Green onions can be replaced with a variety of other ingredients. Some of them may already be in your refrigerator or pantry.

Green onions, to be fair, are one of the few foods that achieve the ideal mix of fresh and pungent. There’s a good chance you’ll find anything useful on this list. Finally, we’ll show you how to produce your own green onions so you’ll never run out!

Green onions are an essential ingredient in many dishes. They add flavor, texture, and color to food. However, they also have a strong smell that can overpower other ingredients. If you want to use green onions in a recipe without having to sacrifice the subtle flavor, try using these substitutes instead if you are unable to find green onions.

If you’re looking for an easy way to add some zing to your dish without having to go through all the trouble of growing your own, chives will do just fine. You can use them raw in salads or cooked in recipes like potato soup. 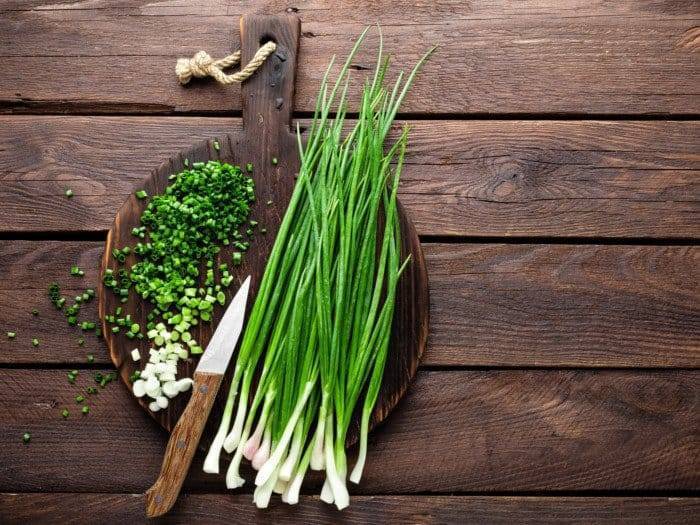 Because chives are a milder form of green onions, you may need to use more of them. Depending on what you’re preparing, chives may or may not be a good alternative. Cooking chives will cause them to wilt and lose their fresh taste. However, if you’re using chopped chives as a topping, garnish, or in a cold dish like a salad, they’ll work perfectly. Use chives in the same way you would a green onion’s greens.

Leeks are another option when replacing green onions. Like chives, leek tops should only be eaten once they’ve started to turn yellow. Leeks are often found at farmers’ markets during the fall season. 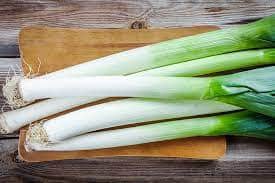 When purchasing leeks, look for firm bulbs with smooth skin. Avoid those with soft spots or wilted outer layers. Cut off the root end and trim away any damaged areas. Then wash thoroughly under running water. Once cleaned, cut each piece lengthwise down the center. For numerous reasons, this is most likely your first pick. Leeks have the appearance of big, robust green onions. It’s a lot larger, with a lot of wide and lengthy leaves. Leeks have a stronger amazing flavor and are thicker than green onions.

The fibrous sections, like the green parts, must be cooked. Green onions, on the other hand, should keep their greens uncooked. If you’re using leeks, make sure they’re extremely thinly sliced. And don’t underestimate the power of a single leek. The white portion of a full leek head is the same size as a medium white onion.

This vegetable has been gaining popularity lately. Its bulb resembles a large clove of garlic. But unlike regular cloves, its stalks grow upwards rather than downwards. This makes it easier to harvest. When harvesting, pull up the entire stalk by the roots. Remove the top layer of papery covering before cutting it into individual pieces. 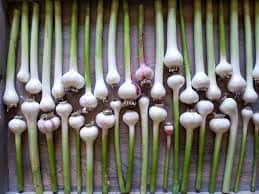 You can eat green garlic right after picking. Or store it in the fridge until ready to cook. Just remember to remove the tough outer layer before cooking. In contrast to mature garlic, green garlic has a single, tiny bulb. This is due to the fact that when garlic matures, it begins to divide into numerous cloves.

It reproduces by dividing itself into numerous parts. Returning to the green garlic. It has a light, fresh flavor that isn’t as strong as adult garlic. It has the same long, delicate leaves as green onions, but the white head is more delicate. It doesn’t hold up well to frying and should only be gently sautéed.

These small vegetables resemble miniature versions of onions. They also contain sulfur compounds which give them a distinct aroma. 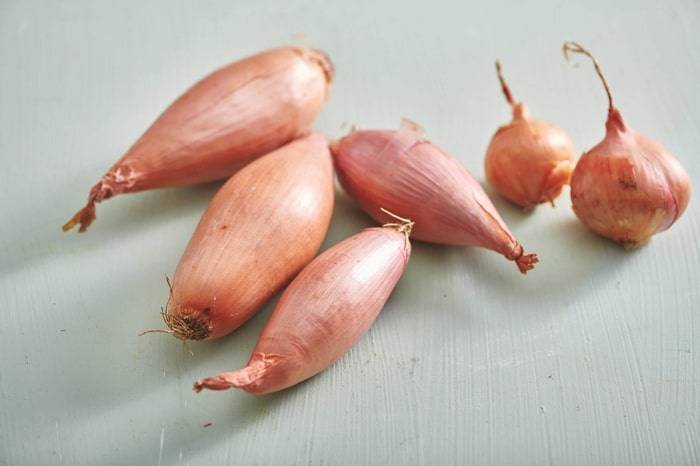 Shallots come from the shallot family along with onions and garlic. Their flesh ranges between pale gold and deep brown depending on how ripe they are. As with many types of products, there are different varieties available. Some are sweeter while others are less sweet. Choose ones that feel heavy for their size. Look for dry soil around the plant.

What if you don’t have anything else in your pantry than shallots? Those should be enough. After all, shallots are described as a delicate mix between garlic and onion, with a considerably milder flavor than normal onions. So select a shallot and utilize it in the same way you would a green onion. Yes, the flavor will be different, but it will work in place of the white portion of green onions. Instead of the greens in green onions, you can use shallots in their raw form.

Wild ramps are herbaceous perennials native to Europe. These plants produce edible shoots called ramp stems. Ramps are similar to spring onions, although they tend to be slightly longer. You’ll find these at farmers’ markets during late summer through early fall. 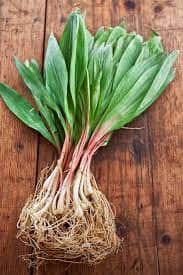 If you live near a farm market, chances are good you’ve seen ramps growing nearby. However, even if you don’t see them yourself, you may still be able to purchase some online. Wild leeks, often known as ramps, are a less frequent alternative. No, not the ramps that you use to get automobiles onto so you can work underneath them. The word "ramps" says it all.

Because they grow in maple or mixed-wood woods, they’re also known as wood leeks. It’s difficult to find in supermarkets unless you go out into the woods and pick some yourself. In terms of flavor, they’re a great mix between onion and garlic.

Can I use regular onion for a green onion?

Yes! If you want to substitute a regular onion for green onion, just make sure you choose one that tastes like what you expect. For example, if you prefer the taste of red onions over yellow onions, then you might consider using those instead.

But if you’d rather stick with something closer to a standard green onion, then this substitution works perfectly fine. Regular onions are significantly more pungent and may totally affect the flavor of a meal. Yes, you may use raw for a salad or cold plate, but only in a little amount. To give the onion a fresher, more vivid flavor, add some lettuce. It also works well if you want to ‘fake’ chopped green onion in a salad or a cold mix.

Green onions aren’t always easy to find when you need them. But once you do manage to locate them, you won’t regret having purchased them. Not only is it easier to store them properly, but they also last much longer than other fresh herbs. Plus, they’re relatively inexpensive compared to most ingredients used in cooking.

These were some of the substitutes you can use instead of green onion. I hope this article was capable of resolving all your food curiosities.

Paprika has become the hottest spice of 2018, and every day seems to bring new claims of its health benefits. People are even using it to self-treat their conditions, from acne to arthritis. The question now is: does this hot pepper really have capsaicin? Capsaicin (aka cayenne) is a hot chili compound found naturally in…

Basmati rice has become very popular over the last decade or so. Many people love its unique taste and aroma. But which brand is the best? Basmati rice is a long grain variety grown in India. The name comes from Basmati village in Punjab where it was originally cultivated. This type of rice is known…

Cognac is a type of brandy produced in France. It’s known for its rich aroma and smooth taste. Explanation There are several types of Cognac including white, yellow, red, and eaux de vie brandy. White Cognac is the most common variety. I’m going to share my top 3 favorite brands o Frapin VSOP ($35): Frapin…

Lasagna is a traditional Italian dish consisting of layers of pasta, meat sauce, cheese, and vegetables. It is usually served cold or at room temperature. Lasagna is classic comfort food that has been around since ancient times. It was originally made with fresh pasta dough, but now it is also commonly made with dried pasta….

Ouzo is a Greek liquor made from distilled grapes. It has a distinctive flavor and aroma and is often served chilled or at room temperature.Ouzo is traditionally served during Greek celebrations such as weddings, baptisms, and funerals. The drink was originally made using only water and sugar, but today it also contains alcohol."Does Ouzo go…