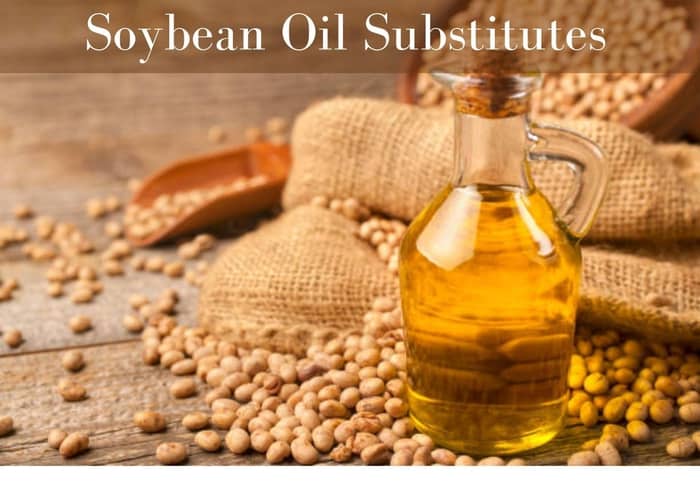 Soybean oil is cholesterol-free and has very little saturated fats hence it is used worldwide for cooking and baking. But if due to health concerns or allergic reasons you want to replace soybean oil with an equally good or better alternative, do not worry. We have a good list of amazing substitutes for you to choose from.

Canola oil, coconut oil, avocado oil, safflower oil, and butter are some of the best soybean oil substitutes. When you are choosing a substitute for soyabean oil the main consideration is its flavour. Just like most vegetable oils, soybean oil has a very mild flavour.

Now, let’s take a look at each substitute to find out more about them

Canola oil is one of the best substitutes for soybean oil. It is made by pressing canola plant seeds. Amusingly it lowest amounts of saturated fats which is only 7%.

It keeps the heart healthy as it contains very low amounts of saturated fats and produces fewer aldehydes when used for high heat frying. It can replace margarine as well as butter for sauteing and grilling.

Also, this oil has a really mild flavour, thereby making it the best substitute for soybean oil in terms of health and taste. In fact, it has such a mild flavour that you just would not even notice any difference in substituting it with soybean oil for any of your dishes.

Coconut oil is made by using coconut flesh or meat. The meat is either cooked or kept raw and then it is pressed to remove the fats. It contains saturated fats that are more neutral than those found in most vegetable oils.

You can substitute soybean oil with coconut oil by taking an equal amount of coconut oil for all the recipes. However, one thing has to be considered when using coconut oil. It remains solid at room temperatures, hence it has to be melted before adding it to the final dish. Also, do make sure that the other ingredients used in the dish are not very cold as that would resolidify the coconut oil. 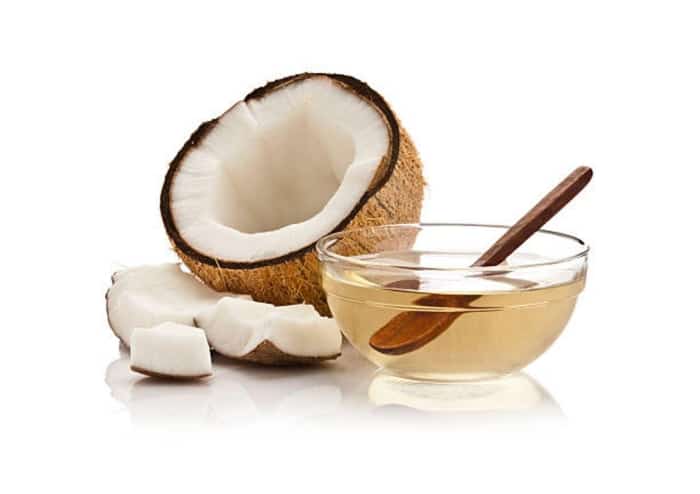 Another matter to consider is the flavour of coconut oil. It has a rich, vanilla flavour which is not mild as soybean oil. It works great in making bread and other baked goods by giving a nice rich nutty flavour to it.

When it comes to withstanding heat, coconut oil works wonders. Hence, it is an excellent choice for baking and high heat cooking.

While it surely isn’t available that readily at the local grocery stores as the other vegetable oils, you can find it at most of the natural food and health stores and can easily substitute it for soyabean oil by using equal amounts.

With a high heating point and buttery, creamy flavour, it is absolutely perfect for grilling, marinades, sauces, dressings, sauteing, baking, and even stir-frying.

The consideration is about the change of flavour as avocado oil has a buttery, creamy taste as compared to soybean oil. Other than that it is a great substitute for soybean oil as it has multiple health benefits like reducing risks of cancers, increasing carotenoid absorption in salsa and salads.

Olive oil is prepared from olive fruits. There is literally no doubt in the fact that olive oil is the healthiest of the oils available in the market. This oil can replace soybean oil in marinades, dressings, and sauteing. But it comes with a low smoke point so please avoid it for recipes that need high heat. 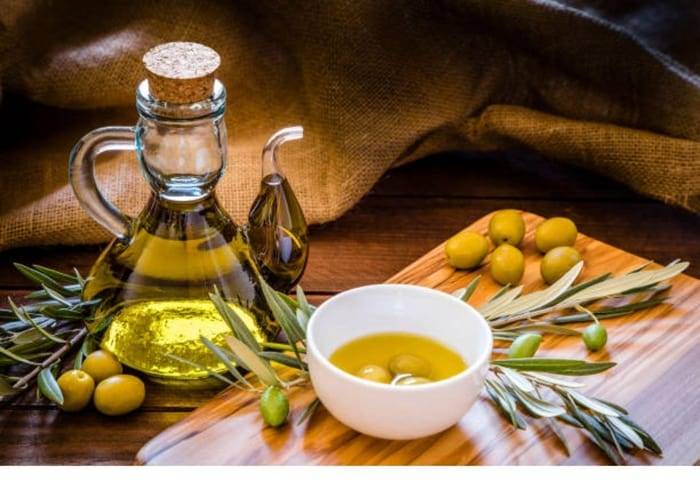 Having a high smoking point, safflower oil is one of the best substitute options at high temperatures. You can prepare deep-fried foods using vitamin and mineral-rich foods like zucchini or assorted vegetables in tempura batter.

It contains monounsaturated fats and hence is healthy as well. It goes well with stir-fries, baked goods, and sauteed dishes owing to its mild flavour.

Despite the name don’t get confused. It is not the flower that is used for obtaining saffron. It’s a distant relative of it but remember to take precautions around it as it will stain everything yellow-orange.

Butter has great flavour and texture making it an excellent choice over oil for baking. If you are baking something and want to replace soybean oil and use butter, add a little more butter than the measurement given in the recipe. However, if you add it as much as mentioned in the recipe, you will yield flavourful nf quite crisp treats.

Butter literally works wonders when it comes to baking muffins, cakes, brownies, or cookies. Its rich, nutty, flavourful taste compliments almost all the baked goods. We know, you might think butter is bad for your health. But it has now been researched that it may help you with your weight loss and impart good health. Animal fat from butter makes lard which is very good for high heat cooking.

While substituting soybean oil or rather any other oil the substitute doesn’t have to be other oil only. That’s because when it comes to baking, oil and fat are there mostly to give everything a rich flavour and maintain the moistness of the dough. And this can be done using other food items as well.

When it comes to baking, it can be substituted with mashed fruits, unsweetened apple sauce, or pureed fruits like pears, prunes, apples, and bananas.

You can use any of these substitutes in a one-to-one ratio when compared to soybean oil. however, these substitutes can bring out slight changes in the textures. for example, when you use apple sauce for making cookies, they may come out more like a cake and much more moist as well. 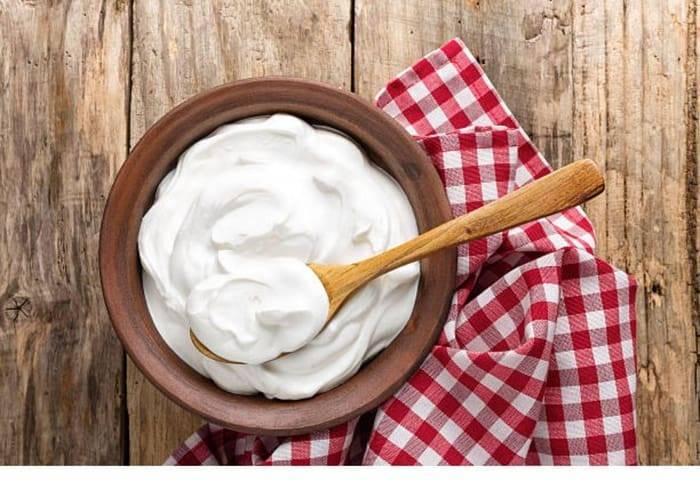 Yoghurt can also be used to substitute soybean oil in baking. While plain yoghurt does the job, you can use vanilla flavoured yoghurt to give an interesting taste to your baked goods. Make sure to reduce the amounts of other liquids while making the recipe and go for an organic variety of yoghurt.

All of the above-mentioned substitutes have their own properties and constituents. Hence, the choice for the substitute will vary according to your recipe and cooking methods.

While some oils have strong flavours which might change the final flavour of the dish, others may not be able to handle high heat. So, it totally boils down to what you are preparing and what cooking method you are using. All you need to do is choose carefully and voila!

If you have any other food curiosities do write us in the comments below.

Sugar glass is a sweet treat that kids love. If you want to make sugar glass at home, you’ll need corn syrup. But some parents say they don’t want to feed their children artificial ingredients. Is this possible?Corn syrup is a thick, clear liquid derived from corn starch or dextrose. It has a low glycemic…

Couscous is a type of pasta that has become very popular over the last decade. It’s often served at restaurants or eaten as part of a meal at home. If you want to enjoy couscous at home, you might wonder how to cook it in a rice cooker.Couscous is a grain dish from North Africa…

Do you want to learn how to cook without using a knife? If yes, then you should definitely check out this article. Ninja is a tool that helps you cut ingredients into smaller pieces. This means you don’t need to use a knife to chop vegetables and fruits. I hope you enjoyed reading this article….

Cucumber seeds contain a toxin called cucurbitacin E, which has been linked to cancer. Is it safe to eat cucumbers? Cucumbers are part of the gourd family, along with melons and squash. They are also known as summer squashes because they are harvested during the hot months of summer. Cucumbers are often eaten raw or…

Saltwater has become a trendy beverage over the years. Many people swear by its health benefits, but does drinking salt water really improve your health?Saltwater is a mixture of sea water and distilled or deionized water. The former contains minerals such as magnesium, calcium, sodium, potassium, chloride, bromide, and sulfate.Yes, you can drink saltwater. In…

You probably already know how to grate carrots using a food processor or grater, but did you know you can also use a blender? This method is much faster and easier than the other methods. If you don’t have a high-powered blender, you might want to consider buying one. They come in various sizes and…