While the modern western world rarely considers caterpillars to be an attractive food group, many cultures now and have historically made a delicacy out of them. You may be curious if caterpillars are a viable food source in a survival situation. Here are the facts.

Caterpillars can be eaten to survive and are high in protein and healthy fats. They have vital amounts of iron and calcium and are low in carbohydrates. When procuring caterpillars you must be careful to avoid the poisonous varieties which typically are furry or have colorful patterns.

Some species of caterpillar are considered the food of the future, such as the mopane caterpillar, other’s can be dangerous. If you are a survivalist who wants to take advantage of the abundance of these insects, please read on.

Surviving off of Caterpillars 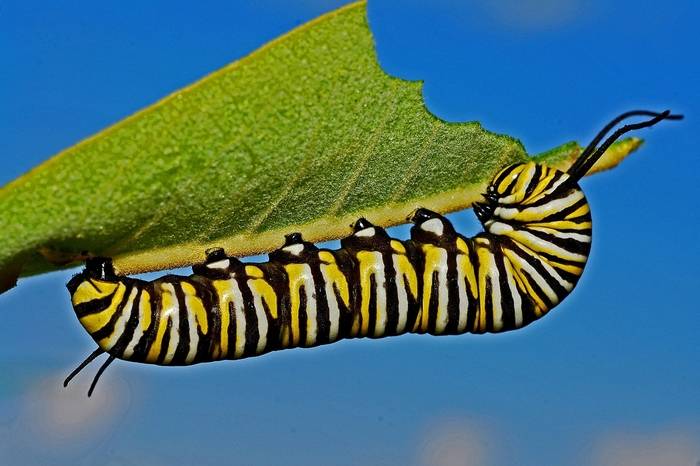 While the most common insects eaten by humans are beetles or some form of crickets, caterpillars (larvae) can be a great alternative. The nutritional value alone makes them a smart choice for survival. However, it should be noted that you would need about 34 (33.3) caterpillars a day to meet traditional recommended daily nutritional values.

What Kinds of Caterpillars Should I Avoid? 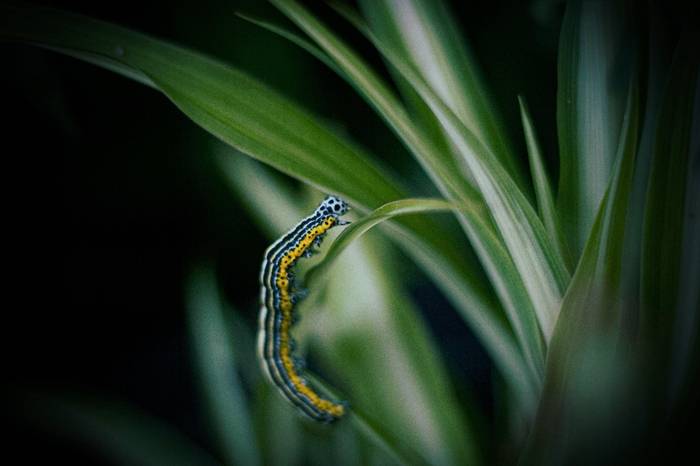 There are two major concerns when eating a caterpillar:

Their toxicity to humans– Avoid colorful, hairy, or unidentifiable caterpillars. Side effects can range from an upset stomach to extreme pain to death.

Pesticides– If you have the choice it would be best to forage for your meals in rural areas, away from agriculture. However, provided you follow these basic guidelines, caterpillars can provide you will all the vital elements for survival.

While many caterpillar species are perfectly fine to eat, there are some general rules about which ones to avoid:

Colorful patterns, like most of the animal kingdom, often warn of a poisonous creature.

Furry caterpillars can also be a danger and identification is key before eating them.

If you are ever unsure about the caterpillar you have found, it is best to leave it behind and search for something else. Even if the poison may not kill you, it may cause other reactions that put you in worse health than hunger.

Common poisonous caterpillars in the U.S.:

How to Eat Caterpillars 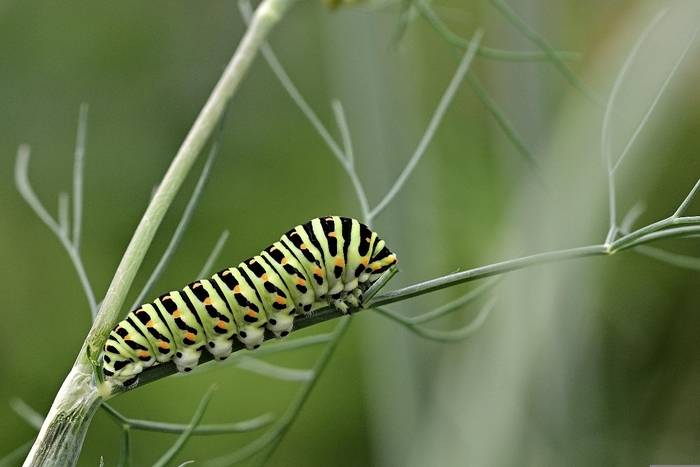 Since eating caterpillars is common in most cultures, the process of preparing them is well studied. In parts of Africa where the mopane caterpillar (see above) is a common delicacy, these insects are picked from their habitats before their entrails are removed. They are then boiled in salt water and left to dry for days. With this method, you can choose to eat them as they are, or rehydrate them before frying if you have access.

Can You Eat a Raw Caterpillar?

It is not advised to simply pick up a caterpillar and eat it raw. Like most meat, this can lead to disease. There can also be pesticides left on the caterpillar that can be poisonous even if the insect itself is not

If you do not have time to dry the caterpillar, any form of smoking or cooking can do the trick. If you have access to the resources, consider adding greens or vegetables like you would for any normal meal. In this way, you can gain what minerals the caterpillar itself lacks.

Learn More:  Can you cook frozen bacon in the oven? 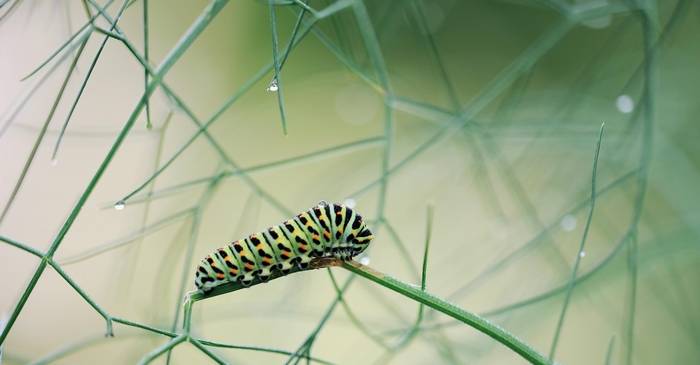 Insects may be abundant, but in the scope of the world, they are very tiny. However, there are certain tricks to finding them in a pinch:

Eating patterns– Caterpillars feed on leaves and leave quite distinctive patterns. If you are searching for them, pay close attention to plants that have been fed on.

Nests– These may be singular and quite hard to spot or they may be large nests with multiple caterpillars. They tend towards the safety of folded leaves or plants with convenient hiding spots.

Forcing them out– If you think a plant might be hiding caterpillars, and you are unable to find them, place something bright on the ground (so that you can easily see them) and rustle the leaves with your arm or a stick. Like a cherry being shaken from its branch, you can easily collect caterpillars this way.

New Growth– Caterpillars like to feed on new growth. It can help to narrow your search by looking for these types of leaves.

At Night– Some caterpillars like to feed at night, which makes them less obvious to predators. If you are not having any luck during the day you may have a better chance once the sunsets.

Do you think eating insects is gross?
Do you think they taste bad?
Well, if you answered yes to either question then you need to read this!
In recent years there has been a huge rise in popularity of insect farming.
This trend has led to a surge in demand for insect protein.
As a result, there has been a boom in the production of edible insects.
In this blog post, I’m going to explain you exactly what insects look like, where they come from, and how they are prepared.

How many caterpillars make 100 grams?

Caterpillar is a common name used for larvae of butterflies and moths. Caterpillars are usually greenish yellow in color. They feed on leaves and other parts of plants. The larva of moth eats woody materials such as twigs, branches, bark, leaves, flowers, fruits, seeds, and roots. There are different types of caterpillars. Among these are the following:- 1 Leaf-eating caterpillars Lepidoptera: These caterpillars eat only leaves. They are found mostly in tropical forests.

Can you eat caterpillars?

Yes, you can eat caterpillars if you know how to identify them correctly. Caterpillars are not poisonous but they are very nutritious. They are rich in protein, vitamins, minerals and fats. It is advisable to consume them raw because cooked caterpillars tend to lose nutrients. However, you can cook them in order to increase their nutritional value. How to cook caterpillars? You can cook caterpillars using any method. For instance, you can bake them in oven, grill them, boil them, roast them, sautee them, fry them, or even steam them.

Their toxicity to humans

What kinds of caterpillars to avoid?

Learn More:  Is cornstarch safe to eat by itself?

Caterpillars are rich in proteins, fats, carbohydrates, vitamins and minerals. These nutrients are required by our body. So, we can say that these insects are beneficial for our body.

Some caterpillars are poisonous. For instance, the larvae of the monarch butterfly Danaus plexippus contains a toxin called cardiotoxin. This toxin is used by the butterflies to paralyze other insects. It is very effective because it does not affect humans. However, if you eat the leaves of plants where the butterfly feeds, you could get sick.

What is a caterpillar?

A caterpillar is a larva a stage between egg and adult of many types of insect. Caterpillars feed on plant matter and usually spin a cocoon around themselves. Most caterpillars are green, but some are yellow, orange, red, black, or white. Many caterpillars have two pairs of legs; others have four or six.

How to eat caterpillars?

Smoked caterpillars are available in different sizes and shapes. They are usually sold in boxes containing 10 to 20 pieces. These caterpillars are stored in a cool place. They can last for about 6 months if stored properly.

Caterpillars are not poisonous but they can be very irritating to the eyes. How many types of insects live in a house? Answer: There are thousands of different kinds of bugs living in our homes.

You get worms in your lettuce. Are caterpillars poisonous? Answer: No, they aren’t poisonous.

Where do they eat caterpillars?

What happens if you eat a worm in lettuce?

They eat leaves, flowers, fruits, and vegetables. Caterpillars feed on plants. How many caterpillars are there? Answer: There are about 1 billion caterpillars.

Can you eat caterpillars raw?

What happens when you eat caterpillar?

Did you know mustard has antibacterial properties that can reduce the risk of burns? In addition, it also helps heal those nasty cuts and scrapes. This simple trick might save lives during disasters. Mustard is considered as a spice rather than a condiment. The main ingredient is mustard seed and some other herbs and spices….

Coconut oil has become a staple in our kitchens. But did you know that it can also be used as a cooking oil? In fact, it’s great for frying food at home or even in restaurants.Coconut oil is rich in medium chain triglycerides MCT, which means it’s good for energy. It contains lauric acid, capric…

Do you know what chamomile tea tastes like? If you don’t, then you should definitely try it! Chamomile tea has been used for thousands of years as a natural remedy for various ailments. It’s also known for its calming properties and ability to relieve stress. 6HXQD0PZd1M In this article I’m going to explain you what…

Tomatoes are one of my favorite fruits. I love eating them fresh out of the garden but I also enjoy making sauces and other dishes using them. I was recently asked if I knew how long a tomato plant could last before it dies. This question came from someone who wanted to know if he…

Baking soda has become a household staple for many people. In fact, it’s often found in kitchens around the world. But did you know that you can also eat it? Yes, you read that correctly. Baking soda is edible.Baking soda is a chemical compound composed of sodium bicarbonate NaHCO3. It’s commonly used as a food…

Have you ever wondered if pickles expire? Pickles are a classic condiment that has been around since the early days of America. They are often served alongside burgers, sandwiches, and other foods. However, did you know that pickles don’t always last forever? In this blog post I’m going to explain you how long pickles should…