Can you eat chicken if you have gout?

Yes, you can eat chicken if you have gout, however, it all depends on the cut and the purine content of the chicken. You will have to follow certain preparation methods and limit the amount of chicken you eat.

Chicken is protein-rich meat with high nutritional value but people with gout need to be careful while eating chicken. It is a source of purines, like all other sorts of poultry, meat, fish, and shellfish.

Purines are converted into uric acid in the body. If you eat purine-rich foods in excessive quantities, a high amount of uric acid can accumulate in your joints leading to an increase in the occurrence and severity of your gout symptoms. 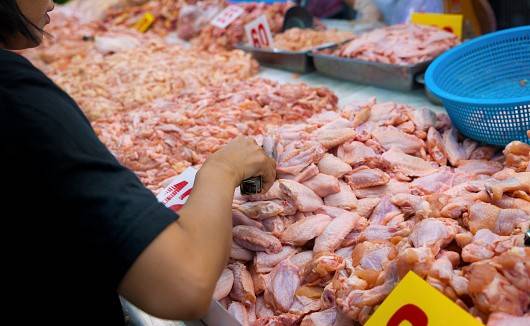 Gout is a kind of painful arthritis that occurs due to an excessive accumulation of uric acid in the body. It can affect one or more joints but commonly occurs in the feet.

A person with gout needs to consume chicken in moderate amounts. This is because chicken has a significant number of purines, which are chemical substances found in every cell of our body and are present in a lot of foods.

A moderate amount of purine consumption can protect blood vessels, but a higher amount can cause increased symptoms of gout.

It has been found that excessive amounts of purine consumption cause increased uric acid levels (hyperuricemia) and results in the formation of uric acid crystals in the joints (typically in the big toe), which can be very painful and even disabling.

The nutritional profile of chicken 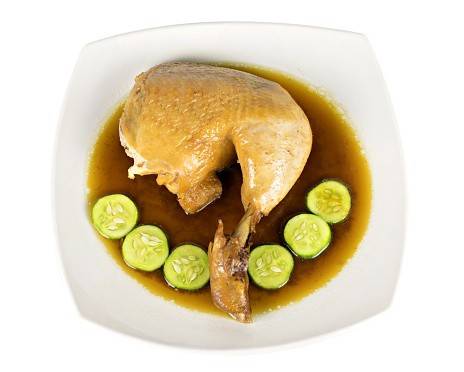 A 3-ounce serving of chicken provides:

People who suffer from gout should maintain their total fat consumption to 30 percent or less of their total daily calories. A diet having high-fat content may worsen your symptoms as fat can stop your kidneys from properly excreting uric acid.

For the meatiest cuts of chicken, take skinless breasts or extra-lean ground white meat. Select less dark meat, i.e., thighs and drumsticks, which comprise more fat per serving. If your sodium consumption is also a concern, buy chicken whose flavor has not been improved with a high-sodium saline solution.

If you are suffering from gout, the following tips can help you out:

Risks of eating chicken with gout 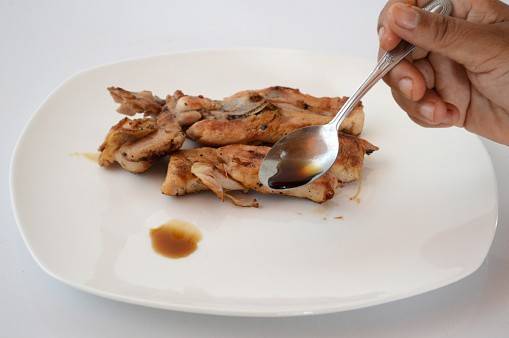 Gout patients can have up to 6 ounces of protein-rich, high-purine foods including chicken per day. Restrict yourself to 2 to 3-ounce servings at a given meal. Drink 8 ounces of water before and after having meals comprising chicken, particularly if you are diagnosed with gout or have a record of kidney stones.

A good amount of fluid intake washes uric acid out of the blood, which helps to prevent the buildup of uric acid crystals in the joints. If your gout symptoms have recently worsened, eliminate chicken from your diet until the problem resolves.

Learn More:  Can you eat during Ramadan?

Foods to avoid if you have gout

If you are suffering from gout, you should avoid the consumption of the following foods:

Foods that should be consumed in moderation include:

Gout is a painful condition caused by excess uric acid in the body.
It’s often referred to as ‘the disease of kings’ because it was once thought to affect only wealthy men who ate rich foods such as red meat and shellfish.
Nowadays, gout affects anyone regardless of their income level.
In fact, it’s estimated that nearly 2% of adults suffer from gout.
So can you eat chicken if you get gout?

Can you eat chicken if you have gout?

Yes, you can eat chicken if you have Gout. It depends upon how severe the case is. In any case, you ought not to take medication for the condition while eating chicken.

The nutritional profile of chicken

Risks of eating chicken with gout

Gout is a form of arthritis caused by uric acid crystals accumulating in joints. It usually affects the big toe joint the big toe is called the “first metatarsophalangeal joint”. Gout attacks occur when the body produces more uric acid than normal. Uric acid is normally filtered from the blood by the kidneys and excreted in urine. However, if the level of uric acid becomes abnormally high, it accumulates in the tissues and forms tiny needle-like crystals. These crystals irritate the tissue around the joints causing inflammation and pain. This condition is known as acute gouty arthritis.

There are many ways to prevent gout attacks. First, avoid consuming alcohol. Alcohol consumption can increase the production of uric acid in the body. Second, eat plenty of fruits and vegetables. Fruits and vegetables are rich sources of fiber and potassium, which help lower uric acid levels. Third, drink lots of water. Water helps flush uric acid from the body. Fourth, exercise regularly. Exercise reduces stress and improves circulation, which helps remove toxins from the body. Fifth, take medications prescribed by your doctor. Medications such as colchicine, probenecid, and allopurinol may reduce the frequency of gout attacks. Sixth, wear comfortable shoes. Wearing shoes that fit well and are not too tight can help relieve foot pain. Seventh, avoid wearing jewelry. Wearing jewelry can cause friction between the skin and metal, which can lead to painful blisters. Eighth, avoid spicy foods. Spicy foods contain capsaicin, an ingredient that increases the amount of uric acid produced by the body. Ninth, avoid using deodorant containing aluminum. Aluminum can trigger kidney stones. Tenth, avoid taking aspirin. Aspirin contains salicylates, chemicals that can cause gout. Finally, seek medical attention immediately if you experience any symptoms of gout. Early treatment can help alleviate symptoms and prevent future attacks.

Learn More:  Can you eat without a tongue?

Foods to avoid if you have gout

Gout is caused when uric acid builds up in the joints. Uric acid is a waste product found in the blood. It normally gets filtered out of the blood by the kidneys. However, if the level of uric acid becomes too high, it can build up in the joints and form crystals. This causes inflammation and swelling in the joint. Gout usually affects the big toe but it can affect other parts of the body as well. Foods that are high in purines found in meat, fish, shellfish, poultry, organ meats, beans, nuts, seeds, peas, lentils, potatoes, corn, avocados, bananas, mangoes, papaya, plums, prunes, raisins, tomatoes, mushrooms, spinach, cauliflower, broccoli, brussels sprouts, cabbage, garlic, onions, bell peppers, celery can contribute to higher levels of uric acid in your body. These foods should be avoided if you have gout.

Chicken breasts are great for quick meals and easy cleanup. Chicken thighs are good for slow cooking and roasting. Chicken wings are great for appetizers and parties. Chicken drumsticks are perfect for making soup.

What are the five worst foods to eat if you have gout?

Yes, you can eat chicken while having a gout attack. However, if your gout attack is severe, you should avoid drinking alcohol. Alcohol is known to aggravate gouts attacks.

Does chicken breast have purines?

Yes, you can eat chicken during a gourd attack. However, if you have a gout attack, you should avoid eating red meats. Red meats are known to aggravate gout attacks. Is it safe to drink beer while taking aspirin?

Can I eat chicken during a gout attack?

Yes, chicken breasts do have purines. Chicken breasts are lean meat, and therefore, contain very low levels of fat. This means that the body does not store any fats in the muscles of the chicken breast. Therefore, the only way to get rid of these purines is to eat them.

What are the 10 foods that trigger gout?

Chicken contains about 0.3 grams of purines per 100 grams of cooked chicken. Purines are found in many types of meats, but chicken is among the lowest. Beef, pork, lamb, and turkey are higher in purines.

Learn More:  How is vegan ice cream made?

Gout is caused by a buildup of uric acid crystals in the joints. Gout attacks occur when levels of uric acid become too high in the blood. This happens when people consume excessive amounts of purines found naturally in meat, fish, poultry, seafood, beans, peas, lentils, nuts, seeds, mushrooms, and spinach or drink too much alcohol. Other factors that contribute to gout include obesity, kidney disease, diabetes, and certain medications.

What are the biggest triggers for gout?

1. Alcohol – alcohol contains a chemical compound called acetaldehyde that can damage the liver and increase the production of uric acid. 2. Caffeine – caffeine stimulates the nervous system and can cause dehydration. 3. Sugar – sugar is converted into uric acid in the liver. 4. Processed meats – processed meats contain chemicals that can irritate the lining of the stomach and intestines. 5. Dairy – dairy products contain hormones that stimulate the release of insulin, which can increase the production of urate.

Does chicken flare up gout?

Gout is a form of arthritis caused by the buildup of uric acid crystals within joints. It is characterized by sudden attacks of intense pain in the affected joints. Gout usually affects the big toe, but can occur anywhere in the body. Gout occurs when the level of uric acid in the blood becomes abnormally high. This happens because the kidneys cannot effectively eliminate uric acid from the bloodstream. Uric acid is formed during the breakdown of purines, substances found in animal proteins such as meat, fish, poultry, shellfish, yeast products, and beer. High levels of uric acid in your blood can lead to painful inflammation of the joints called gout.

Buying pantry staples, such as rice and flour in bulk is a great way to save money. However, your savings may be wasted if the food will be infested with insects. If you see maggots and black bugs in your rice, no worries since they will not harm you.   In this short article, we…

You’ve probably seen recipes calling for adding lemon juice to milk or water to prevent it from turning into curds. But why does this happen? And what exactly happens when you add lemon juice to milk? Milk contains casein protein, which forms clumps when heated. Adding acid such as lemon juice breaks down these clumps,…

Did you ever wonder whether you can cook different types of beans together? Well, you can! In fact, cooking them together can give you some great benefits.Beans are a staple food around the globe. They are inexpensive, nutritious, versatile, and delicious. There are over 100 varieties of beans, ranging from white kidney beans to black…

Eggs are a staple food around the globe, but some people are concerned about their health risks. Can you really get sick from eating raw egg yolks?Eggs are a great source of protein, vitamins, minerals, and other nutrients. They also contain cholesterol, which is essential for good health. The American Egg Board says that consuming…

You’ve bought a whole chicken at the supermarket, but now you want to cook it. How should you prepare it? Should you cut off the wings or leave them attached? What temperature should you heat it to? And how long does it take to boil a frozen chicken?Frozen chickens are convenient because they don’t require…