Hippos are the third-largest land mammal on earth following the elephant and rhinoceros. An adult hippo weighs between 1,500 to 1,800 kilograms and stands at about 1.5 metres tall.

Can you eat hippopotamus?

Yes, you can eat hippopotamus. The meat of the hippopotamus is a popular staple in Africa and is recognised as a delicacy.

The meat of the hippopotamus can be cooked in many different ways. It can be grilled; roasted over an open flame or spit-roasted on top of coals from wood fires (a traditional method).

The hippopotamus, also known as hippo or water horse, is the third-largest land mammal on earth after the elephant and rhinoceros. They have a heavy body with stubby legs, a huge head and a small tail. Hippos have four toes per foot, each having a nail-like hoof. 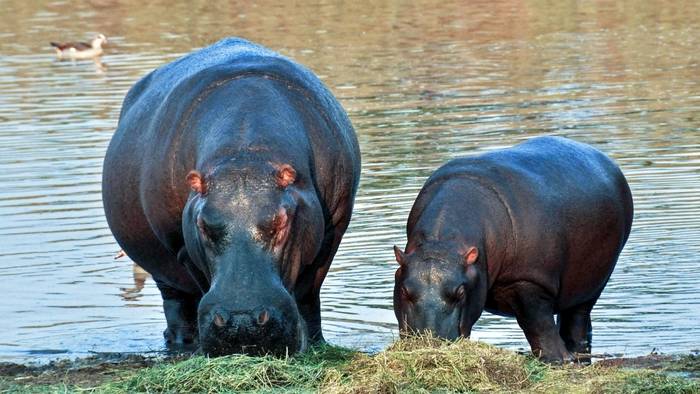 The hippopotamus is greyish brown with pinkish underparts. The skin of the hippopotamus is 5 centimetres thick on the flanks and thin everywhere else with almost no hair. The mouth is half a metre broad and can open 150 degrees to expose the teeth.

Hippos are fully acclimated to marine life. Their ears, eyes, and nostrils are positioned on top of their head in a way so that the rest of the body remains submerged in water. The ears and nostrils can be folded to prevent water. Their body is so heavy that they can walk underwater, where they can hold their breath for 5 mins.

Although hippos are frequently observed relaxing in the sun, they lose water quickly through their skin and get dehydrated without recurrent dips.

Hippos feed mostly on short grass. They spend more than 5 hours eating every evening. They walk up to 5 miles during that period. They retain food for a long time in their stomach, where protein is obtained by fermentation. Their digestive process cycles large quantities of nutrients into the African rivers and lakes and thereby helps the fish that is so essential as a protein source in the diet of the locals.

The taste of hippopotamus meat 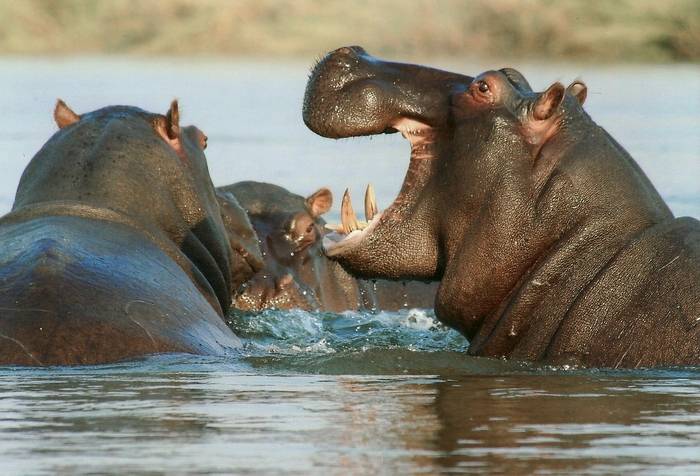 The taste of the hippopotamus meat is often considered similar to beef, with a mildly sweet flavour and hard texture that can be adjusted by marinating it before cooking or smoking above an open flame.

The taste of hippopotamus meat also varies depending on how you cook it; if you cook the hippo meat with spices like cumin seeds then its taste will be similar to venison.

However, when cooked without flavourings, the hippo meat gives off more of a pork flavour as pigs are also omnivores who feed upon both plants and animals just to survive.

The thing that differentiates hippopotamus meat from other meats is its fat content. The hippopotamus meat has about 3 times more unsaturated fats as compared to beef, which means that it can be cooked without any added oil or butter and still taste juicy, even if you are following the traditional method.

The hippo meat also has a fewer amount of cholesterol as compared to other animals including cows, as they do not produce as much low-density lipoprotein as opposed cattle who are served corn meals to make them fat.

Learn More:  Can you eat eggplant on keto?

Some ways to cook hippopotamus meat 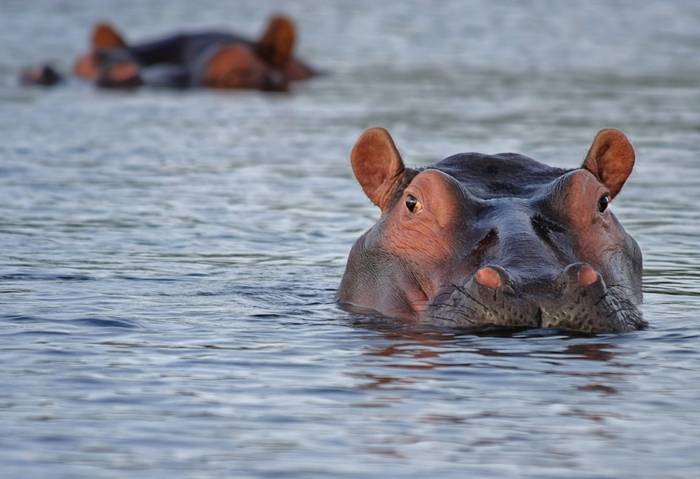 There are many ways to cook the meat of hippopotamus. One popular way is grilling the steaks or ground patties over an open fire, which gives it a somewhat barbecue-like taste and texture that is both juicy and tender on your palate.

One more method of cooking the meat of hippopotamus is in stews like beef stew with vegetables including potatoes, carrots, onions, celery, garlic, peppers, tomatoes etc., but you can also use other seasonings if you want.

It is somewhat difficult to cook the meat of a hippopotamus as it is very hard, but with a few tips mentioned below, you will be able to make it taste good.

Boil or simmer the meat of a hippopotamus for hours and then add in it some vegetables which will help tenderize and season the meat.

Marinate the meat of hippopotamus overnight before cooking, if possible, try using vinegar-based seasonings such as soy sauce that is rich in acidity levels (which helps to break down proteins).

Hippo meat has become a trendy food item in recent years.
In fact, some restaurants even serve it as a special dish.
Is it really safe to eat?
Hippos are herbivores, meaning they only eat plants.
They are also known to be very slow moving animals, spending much of their time grazing or sleeping.
This makes them vulnerable to predators such as crocodiles and lions.
While hippo meat is considered exotic, it is not recommended to consume it due to its high fat content.
The meat contains around 50% fat, compared to 30% for beef and pork.
Also, hippo meat is rich in cholesterol and saturated fats, which can increase your risk of heart disease

Can you eat hippopotamus?

The taste of hippopotamus meat

Some ways to cook hippopotamus meat

Hippos are herbivores, meaning they eat plants. Hippos are not meat eaters. They are very slow moving animals and prefer to stay away from humans. Hippos have been known to attack people who get too close to them. Hippos are found in Africa, Asia, Australia, and South America. Hippos live in rivers, lakes, swamps, and marshes. Hippos are sometimes called river cows because they spend most of their lives near water. Hippos are the largest land animal. They weigh about 3,000 pounds 1,360 kg and stand 6 feet tall 180 cm. Hippos are covered in thick hair and have long snouts. Their skin is dark grayish brown. Hippos have four toes on each foot and five fingers on each hand. Hippos have no teeth. Hippos have two nostrils located on top of their heads. Hippos have webbed hind legs and hooves. Hippos are herbivorous mammals. They eat grasses, leaves, roots, and other vegetation. Hippos are omnivores.

Hippos are herbivores that eat grasses and other vegetation. Hippos are found in Africa, Asia, Australia, and South America. They are known for being very aggressive animals. They are not dangerous but they can attack humans if provoked. Hippos are usually solitary creatures except during mating season. They live in rivers, lakes, swamps, and marshes. Their diet consists mainly of plants, insects, fish, and frogs. Hippos are sometimes called river cows because of their ability to swim long distances. Hippos are the largest living land animal. They weigh between 3,000 and 6,500 pounds 1,360 to 2,845 kilograms and stand about 9 feet tall 2.7 meters.

Learn More:  How to counteract too many red pepper flakes in food (5 ways)?

What animal has tastiest meat?

Lion meat tastes very similar to beef but it is leaner and has a stronger flavor. It is usually sold frozen and comes from Africa. Lion meat is used in many dishes such as curry, stews, and soups. It is also used in Chinese cuisine.

Is hippo meat safe to eat?

Cows are known to produce the tastiest beef. It contains more protein and fat than any other type of meat. Cattle are herbivores and eat grasses and leaves. Their diet consists mainly of green plants. This is why cows are called herbivores.

Hippos are herbivores and they only eat grasses and leaves. Hippos are not carnivorous animals. They feed on plants and vegetation. Hippopotamus meat is very tough and hard to chew. It is not suitable for human consumption.

Rhinoceros tastes like a cross between beef and pork. It is lean meat with a mild flavor. It is a very popular meat in China because of its tenderness and low price.

Most people think that eating meat is bad for their health. However, there are those who believe that eating certain types of meat is beneficial. There are many different types of meat out there, but the two main ones are red meat and white meat. Red meat includes beef, lamb, pork, etc., while white meat…

Have you ever opened a jar of pasta sauce only to discover that it was empty? This happens because the lid has become stuck or broken. If you want to prevent this from happening again, follow these simple steps.Pasta sauces come in jars, bottles, cans, and boxes. They are convenient and affordable, but they also…

Queso Fresco is a Mexican cheese similar to feta or cheddar. It has a mild flavor and creamy texture. Queso fresco is usually eaten raw, though it can also be grilled or baked. The word “queso” means “cheese” in Spanish. Queso fresco is a fresh cheese, which is typically aged between 3 to 12 months….

The “rubber-like” material used to make Crocs is a closed-resin foam called Croslite and is resistant to fluid and odor. Aside from that is that this pair of footwear does not skid and is very lightweight. In this article, we will answer the question “Can you eat your crocs?” and discuss what is its health…

Kaffir lime leaves are commonly eaten in Asia and Africa. They are known for their sour taste and they are often added to dishes such as curries or soups. Can you really eat them?Kaffir lime trees are native to South Africa and Australia. The leaves are used in cooking, especially in Asian cuisine. Some people…