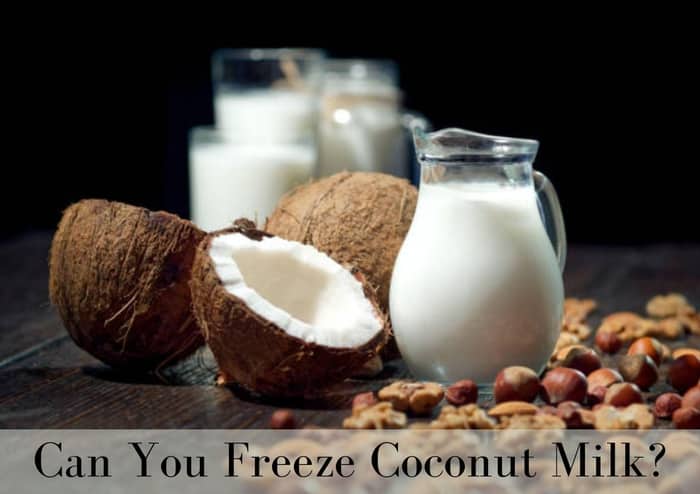 If you are an avid fan of Thai, Indian, Southeast Asia, East African cuisine you surely would have made curries using coconut milk. For some reason, an entire carton or a single can never match the amount that the recipe calls for. And you are left with a third or fourth cup of leftover coconut milk.

Then the question arises, how to store the leftover coconut milk for later use? Can you freeze coconut milk? Is that possible? Does the flavour change? What other ways are there for storing it?

Well, there isn’t a simple yes or no answer to this question of whether you can freeze coconut milk or not. It depends on how you really want to use it and your standards for its quality. In short, it’s a little complicated.

But don’t worry! We are here to help you dig in further and understand it better. But first, let’s understand what coconut milk exactly is.

What Is Coconut Milk?

Coconut milk is opaque, milky-white plant-based milk extracted from the grated pulp of mature coconut flesh or meat. The opacity and the rich flavour of the milk are due to its high oil content, most of which is saturated fat.

Typically, the coconut flesh is grated and then pressed using cheesecloth in hot water. It is pressed until the fats and proteins separate and mix with the hot water.

The thick, creamy coconut milk known as coconut cream is made only with warm coconut flesh and no water.

The thickness of coconut milk depends on the amount of water added to it. Different brands have varying thicknesses. Adding water to the coconut milk lowers the fat content and makes it easier to handle.

Now, let’s explore if and how to freeze coconut milk.

Can You Freeze Coconut Milk?

Yes, you can freeze coconut milk but freezing and thawing changes the texture and arguably the taste of coconut milk, hence manufacturers do not recommend freezing it. Do not worry, we have a workaround for this problem as well.

Store frozen coconut milk for up to 30 days

It’s a universal rule of storage to not keep things in the freezer for too long. This rule applies here as well, as a separation process takes place when coconut milk is frozen.

The issue here is that the protein gets separated. Like with meat, it may as well develop freezer burns if kept for too long. This will alter both the flavour and taste of the coconut milk which is not desirable.

But, what is this separation process that takes place? Why does it happen?

What happens when coconut milk is frozen?

Coconut milk is an emulsion like mayonnaise. This means that the creamy substance is a result of blending the fats together with water. Hence, you can break the emulsion by disrupting the balance of fats to water or by exposing it to extreme temperatures.

The water present in coconut milk (like dairy whey) will get separated from fats and proteins thereby changing the texture of the milk to a grainy and not exactly pleasant one. You need to emulsify it again in order to regain the texture back.

You might have gone through these circumstances where one can of coconut milk is all white on the top but when you added it to the curry you realized that it was just coconut fat. And the coconut milk is much lower in the can as it got separated in the fridge without our notice. On looking closely, you will observe that the fats are white but slightly transparent, especially around the edges and the proteins are opaque and a bit brighter.

Does coconut cream behave any differently?

No, coconut cream also behaves the same way when frozen. It’s true that it does not contain any added water but that means it has a high concentration of fats. This means a good amount of fats are going to get separated from proteins and whey (the natural coconut flesh liquid).

So, a workaround is required to get the right texture and consistency of coconut milk when frozen.

It’s simple, blend the coconut milk after thawing. As long as the milk is reasonably warm, at room temperature, it will blend back together easily and beautifully.

You will notice that even canned coconut milk gets separated forming a thick top layer of fats and a bottom layer of whey. This usually happens to any milk when subject to refrigeration.

Whether immersion or regular, give your thawed coconut milk a nice quick blend using a blender or if you are looking for a good workout, use a whisk. Or if it’s in the jar and tightly closed then shake it away! All of these methods work well as it’s basically agitating the ingredients thereby forming an emulsion again.

Even when freezing is possible, it still does change the flavour and texture as compared to the original coconut milk. So, if you don’t want to freeze it then here are some ways you can store it anyway.

All of these methods are going to vary greatly in terms of their efficiency depending on the quality of coconut milk you are using. One made with a couple of stabilizers (usually the canned ones) can be kept well as opposed to the fresh ones. 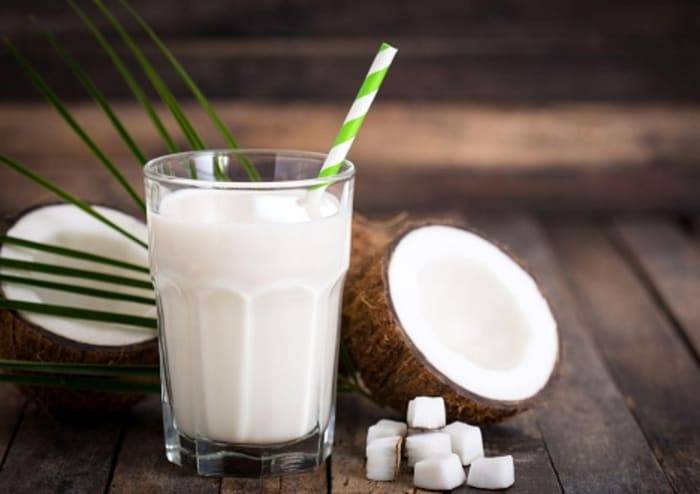 If you have prepared fresh coconut milk right from scratch! Give yourself a pat on your back. Because it’s actually a really nice skill to have. So, if you have freshly made coconut milk it can be stored in the fridge for up to 7 days without any problems. We recommend you to give a quick stir every now and then, just to make sure that it doesn’t separate.

Canned coconut milk will generally solidify on the top depending on the fat content it has, so use a clean spoon to scoop it out to put in food or your coffee. It is very important to use clean utensils to get the milk or cream out, otherwise, those 2 weeks will turn to 24 hours or even less than that.

Please remember to keep the coconut milk airtight and sealed. We are talking cling wrap, aluminium foil, a type of airtight seal. otherwise, white fluffy mould will grow on the top making the milk bad for consumption.

If you have unopened canned coconut milk to store, then just look for the expiry date on them. Generally, these are made to be shelf-stable and hence remain consumable till the expiry date passes by.

Unopened canned milk lasts for about a month without any refrigeration as well. So, if you are freezing it to keep it for a little longer, which we don’t really recommend, as it separates the fats and proteins and whey, creating an unpleasant texture.

In any case, try using it before the expiration date for safe and flavourful consumption.

Keep in mind that coconut milk is just your regular milk with an extra amount of fats, hence it can be used as a substitute for any other milk.

So, if you are not willing to freeze and store your leftover coconut milk, there are these amazing and delicious ways to use it.

Use the milk for coffee

One of the best ways to use coconut milk (in our opinion) is to use it in coffee. The combination of sweet coconut milk with dark coffee is heavenly. A cup of healthy coffee would be made in an instance.

To add to the magic, you can drop some rum extract and have a coffee very close to rum balls. You can even add actual rum if you like it.

Use it in smoothies and milkshakes 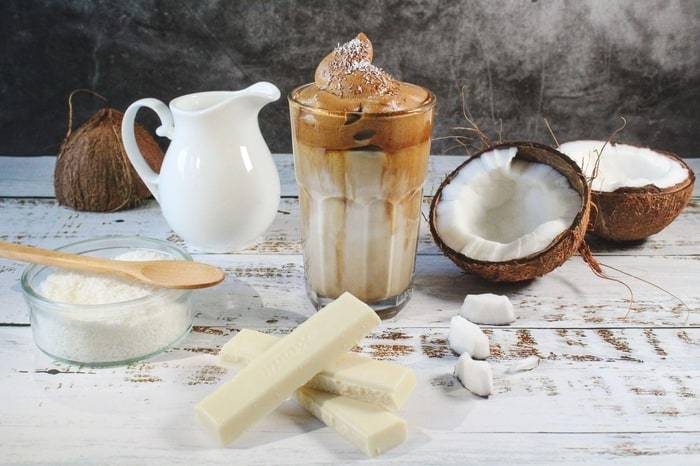 Another great way of using leftover coconut milk, aside from coffee, is to use it in smoothies and milkshakes. If you find your milk is a bit thicker than your preference, just water it down to the consistency to enjoy. It works great in chocolate, fruits, nuts and berries smoothies. As it has a naturally sweet taste, you can skip some spoons of sugar in it as well.

Use it for baking

You can use your leftover coconut milk to bake some recipes, whether it’s a really moist cake batter to some fancy pastry. It will work fine in it. The extra fat present in the coconut milk will actually keep the sweets nice and moist, so butter and oil won’t be needed much.

Drink it as it is

Coconut milk with its sweet nutty flavour is great to drink as well. Enjoy your cup of coconut milk for a healthy breakfast along with some bread, oats and nuts.

Coconut is a really great milk that can be used in a lot of combinations aside from just curry. Yes, you can freeze and store the coconut milk but beware of the separation process and blend it after thawing for proper taste and texture.

As long as the flavour after freezing is up to your preferred quality and you are willing to experiment, freezing is a great option to store leftover coconut milk. And there are many other ways listed above that will help you use it in many other recipes.

Try them and let us know about your food curiosities in the comment box below.

Kamado grills are becoming increasingly popular. They offer great flavor and heat retention, and they are very affordable. But are they worth it?A kamado grill is a type of outdoor cooking device that uses ceramic or clay pots called Kamados. The name comes from the Japanese word for charcoal. These grills are designed to cook…

I’m sure you’ve seen those little yellow stickers on food saying "sell by date". What does that mean? Sell by dates are used to indicate the shelf life of foods. They are usually printed on the packaging of perishable goods such as meat, dairy, eggs, fruit, vegetables, and baked goods. In this blog post, I’ll…

Mac and Cheese has become a staple at every American family get together. And it’s no wonder why. This cheesy dish is delicious, versatile, and cheap to make. But did you know that there are countless variations of Mac and Cheese out there? There are two basic types of Mac and Cheese: One uses elbow…

Tomato sauces are great additions to pasta dishes or pizza toppings. They add flavor and color, but they also thicken up the dish. How do you get them to thicken without adding too much water?Tomato sauce is a mixture of tomatoes, herbs, spices, and other ingredients. The key to thickening it is using the correct…

Other FAQs about Cinnamon which you may be interested in. Cinnamon is a spice used in many dishes. It comes from the bark of a tree called Cinnamomum zeylanicum. It is native to India and Sri Lanka. In Ayurvedic medicine cinnamon was used to treat fever, cough, colds, diarrhea, indigestion, stomach ache, toothache, and vomiting….