What is Canola Oil?

Canola oil, or rapeseed oil as it is more commonly known in Europe, is a type of vegetable oil that comes from the rape plant (Brassica napus). Canola’s namesake comes from a mix of the words "Canada," where rapeseed is produced the most worldwide, and "oil." Canola oil was invented by Canadian scientists in the 1970s and was the product of crossbreeding to make a version of the rapeseed plant that wasn’t toxic to humans.

The now common kitchen pantry oil is a great oil for cooking, as it has a high smoking point at 400 F. It has a mild taste, which makes it a good oil to use if you don’t want to alter the taste of your dish. It is also considered to be a healthy oil, since it is very low in saturated fat, has zero trans-fat, and is higher in monounsaturated fat which is great for heart health. Saturated fat is known to raise cholesterol levels, whereas monounsaturated fat can improve cholesterol levels and help in the prevention of heart disease—which makes this oil the best of both worlds.

What is Vegetable Oil? 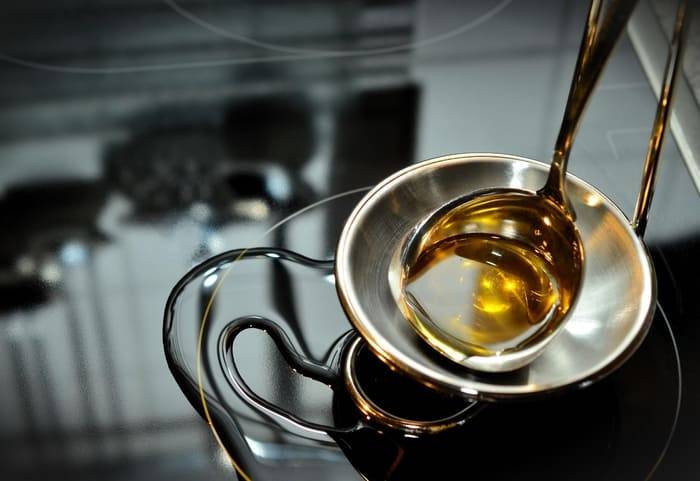 It might be surprising to know that vegetable oil doesn’t contain any vegetables. Instead of describing what is in the oil, the name’s use is primarily to differentiate it from lard or animal-based oils. Vegetable oil is any oil that is derived from plants or seeds. This includes canola oil, soybean oil, olive oil, sunflower oil, avocado oil, coconut oil, and more. Most of the vegetable oils sold in grocery stores are just soybean oil, corn oil, or a combination of the two.

Like canola oil at 400 F, vegetable oil has a relatively high smoking point at 450 F. It has a mild taste, is fairly inexpensive, and is a good option for frying, sautéing, and baking. However, since the plants the oil is derived from can vary from bottle to bottle, you might not have as much control over the nutritional content and fats you are consuming.

What is the Difference Between Canola Oil and Vegetable Oil? 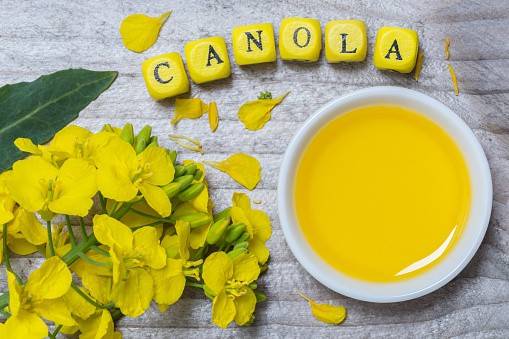 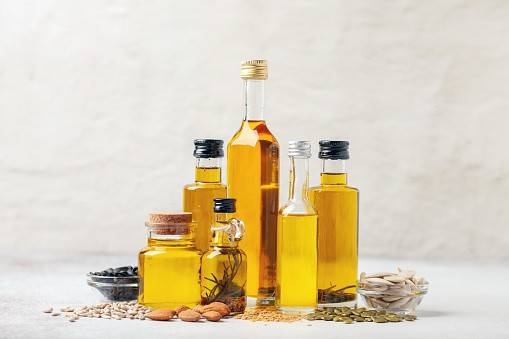 While plant-based fats are considered more heart-healthy than animal fats, canola oil is generally believed to be a healthier option because it is lower in saturated fat than vegetable oil. According to, "canola, like walnut oil, is one of the few oils that’s rich in omega-3 fat ALA—and research shows it may help lower total and "bad" LDL cholesterol." Cooking Light

Is There a Difference in Their Smoke Point?

The smoke point also referred to as the turning point, is the temperature at which an oil starts to break down and degrade. When oil is heated past its smoke point, it may result in an unpleasant-smelling kitchen and can add an acrid, burnt taste to food.

The Short Answer: Yes, You Can Swap Canola Oil in For Vegetable Oil 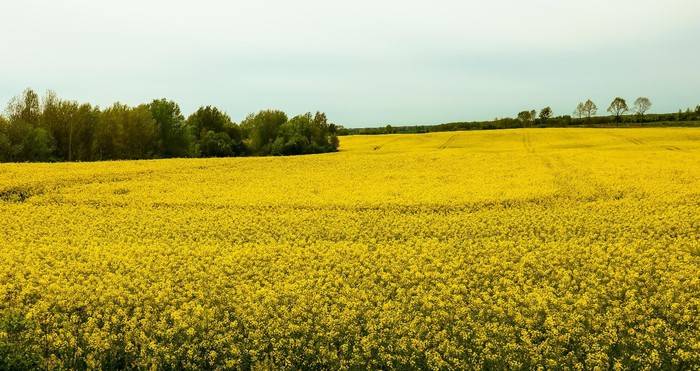 The short answer is, yes, you can replace vegetable oil with several different options, including canola oil.

In all honesty, as a baker or chef, you can do anything you want. That’s your artistic initiative! Swap out your vegetable oil for olive oil, safflower oil, virgin coconut oil, or many more options. Just be aware of what you’re doing and how it’s going to change your recipe and the final flavor.

Vegetable oil has almost no flavor or color. That’s actually why so many chefs and bakers like it. It doesn’t affect the final color or taste of their finished product. So, you need to be careful about what oil you switch it out for, to make sure that it doesn’t negatively affect your recipe. Oils like coconut, avocado, and olive oil will all have a lot of flavors and can negatively affect sweet foods or positively affect savory foods — but it all depends on what flavors you’re going for!

How to Safely Store Vegetable and Canola Oil 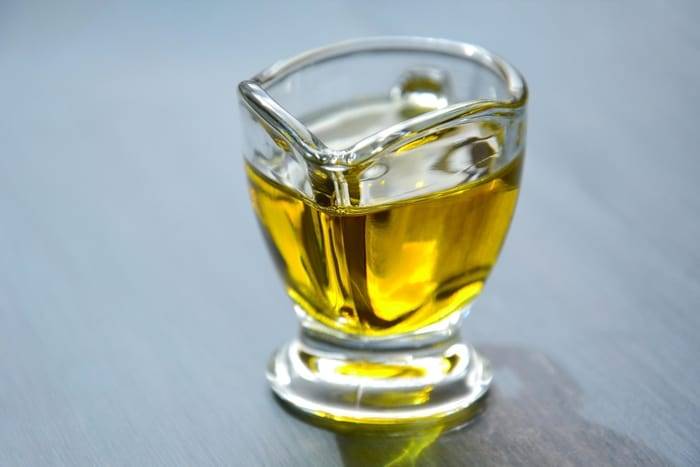 The best place to store your oils is in a dark, dry, and cool place, out of the line of direct sunlight and away from humidity. Oils should not be exposed to air, so make sure they are properly sealed after each usage. Oils that are stored for too long can become rancid from oxidation, and should not be used. If your oil smells bad or tastes bad, you should throw it out. If your oil bottle has residue left on the rim near the cap or the rest of the bottle, it’s probably a good indicator that you should invest in some new oil. Always be sure to look at the best by date to know how long your oil will stay fresh when stored properly.

Baking is a great way to enjoy delicious treats without having to worry about calories or fat grams.
But sometimes, substituting certain ingredients for healthier alternatives can be tricky.
Canola oil is often recommended as a healthier option than vegetable oil.
But does it really make sense to swap out one type of oil for another?
Vegetable oils are high in saturated fats and trans fats.
They also contain omega-6 fatty acids, which can increase inflammation and raise cholesterol levels.
In contrast, canola oil has less saturated fat and fewer trans fats, and contains only trace amounts of omega-6 fatty acids.
While canola oil is considered a healthier choice than other types of vegetable oil, it isn’t necessarily better for cooking.
The main reason why some people choose to use canola oil over other types of oil is because they believe it tastes better.
If you want to bake with canola oil, then go ahead.
Just remember that it won’t taste as good as regular vegetable oil

Can I substitute canola oil for vegetable oil in baking?

Canola oil is a great choice for baking because it contains no trans fats and is low in saturated fat. It’s also very stable at high temperatures, making it ideal for baking. In addition, it has a neutral flavor and is relatively inexpensive.

Canola oil is extracted from the seeds of Brassica napus rape plants. It is low in saturated fat and contains no cholesterol. It is widely used in commercial products such as baked goods, margarine, shortening, salad dressing, and mayonnaise. Canola oil is also used in the production of biodiesel fuel.

Is canola oil good for baking?

Vegetable oil is used to grease pans and bake goods such as cakes, cookies, breads, muffins, pies, pastries, and other baked goods. It is also used in salad dressings, sauces, dips, and spreads. Vegetable oils are generally solid at room temperature but become liquid at higher temperatures. Oils are composed primarily of triglycerides, which are three fatty acids attached to glycerol. These fats are derived from plants e.g., soybean, corn, sunflower, safflower, peanut, cottonseed, olive or animals e.g., beef tallow.

What is the best oil to use in baking?

Baking oils are used in many different ways. For instance, they are used for making breads and pastries. Baking oils are also used to coat other baked goods such as cookies and muffins. These oils are also used to make shortening and lard. Vegetable oils are used in the production of margarine and salad dressings. Canola oil is a type of vegetable oil that comes from rapeseed plant. It contains no trans fats and is low in saturated fat. This oil is very versatile and can be used in a wide range of recipes.

What can I use if I dont have vegetable oil?

Vegetable oil is used in many recipes because it adds flavor and moisture to baked goods. However, if you are looking to cut back on fat, you can swap vegetable oil for other types of oils such as olive oil, coconut oil, or even butter. For instance, instead of using 1 cup of vegetable oil, you could use 3/4 cup of olive oil. This will still give you the same results but with less fat.

Which oil is best for baking?

Baking oils are used in many different ways. Baking oils are used to coat the surface of baked goods such as cookies, breads, muffins, and pastries. Oils are also used to grease pans and cookie sheets. In addition to these uses, oils are also used to help clean utensils and bakeware. Oils are also added to recipes to enhance flavor. Most oils are derived from vegetable sources. Vegetable oils are generally solid at room temperature. These oils are typically refined using chemical processes. Refined oils are clear and colorless. Unrefined oils are opaque and colored. Many people prefer unrefined oils because they tend to have a stronger taste.

What can I substitute vegetable oil for in baking?

Vegetable oil is used for deep frying because it has a low smoke point. It is not recommended to use other oils such as peanut oil, corn oil, olive oil, sunflower oil, safflower oil, soybean oil, grapeseed oil, or any other oil that contains polyunsaturated fats. These oils have a higher smoke point and therefore are better suited for baking.

Which is better for baking canola or vegetable oil?

What can I use to substitute vegetable oil in cake mix?

Canola oil is a great choice for baking because it contains no trans fats. It does not smoke or burn easily and it is very stable. Canola oil is a healthy alternative to other oils such as olive oil, peanut oil, and safflower oil. It is low in saturated fat and high in unsaturated fat. It is also a source of omega 3 fatty acids.

Christmas is almost upon us, and you want to impress your friends and family with a delicious dessert. What should you serve them?The classic Christmas pudding is a rich fruit cake filled with dried fruits and nuts. It has a long history, dating back to medieval times.You can easily steam a Christmas pudding, but it…

Can you eat 3 cups of rice per day? How much water does it need? What if you add vegetables? Rice is a staple food in Asia and Africa. In fact, it’s considered the world’s fourth largest crop after wheat, corn, and soybeans. Zp_QE6l0m1g Rice is a very versatile grain. It can be used to…

How long does it take for sweet potatoes to spoil?Sweet potatoes are a staple food in many countries around the world. They are also known as yams or cassava. The roots of these tubers are rich in nutrients such as vitamin C, potassium, iron, fiber, and antioxidants.Sweet potatoes are often stored at room temperature for…

Are you looking for a plant-based meal that won’t leave you feeling bloated or hungry after eating? If yes, then you should try out the new vegan menu at 500 Vegan Cafe. This restaurant has created its own unique dishes that are both delicious and nutritious.500 Vegan Cafe was founded by two friends who wanted…

Cake flour is used to make cakes, muffins, cupcakes, and other baked goods. It has a finer texture than all-purpose flour, making it ideal for light, tender cakes. Bread flour is similar to cake flour, but it contains less gluten. The difference between bread flour and cake flour is subtle, but it can affect the…