Table salt is one of the most common seasonings that is found in the kitchens of many and because of this, it is one of the most readily available kosher salt substitutes. As it is particularly versatile, it can be used for the majority of the cooking and baking recipes. Though the size of the flakes can differ between brands, the crystals of table salt are typically fine and easily dissolvable.

Due to the difference in grain size, it is important to be careful with your measurements. Following a recipe that calls for a teaspoon of kosher salt, you should add ½ or ¾ teaspoons of table salt. Essentially, you will be using slightly less table salt than you would using kosher salt. Remember that you will need to adjust the volume of salt that you substitute according to the flake size. 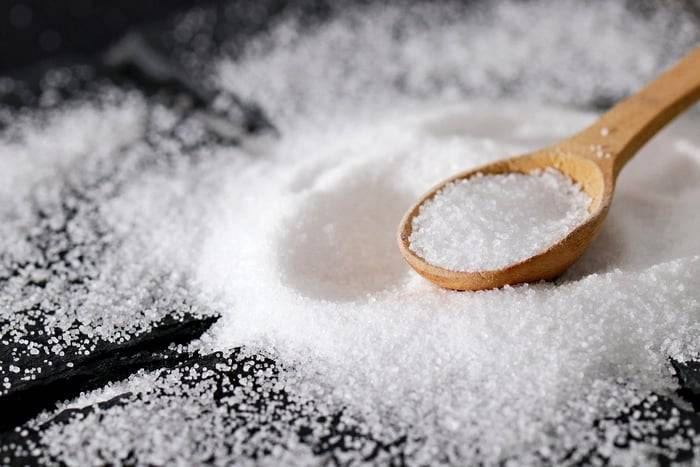 The makeup, size, and density of sea salt are similar to that of kosher salt, so the answer is yes, you can certainly substitute sea salt for kosher salt. The difference between the two comes down to the way sea salt is harvested, and its higher price tag: the grains are created when seawater evaporates.

There are many, many sea salts out there: each defined by where it’s from. Some are very flaky, light, and white and some are very dense and grey. Most cooks who use sea salt have a very firm idea of which one they prefer – it is a personal choice. Because sea salt is one of the most expensive types, it’s traditionally used as a finishing ingredient – sprinkled over a dessert, or on top of food right before serving. 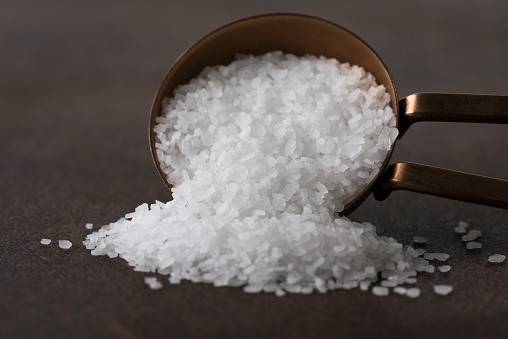 As compared to table salt, kosher salt has a larger grain size and is sold as flakes with large surface areas. It can be made from seawater or salt mines and has a mild and bright flavor. As its flakes have large surface areas, they stick to meat chunks, thereby drawing out more liquids and blood. This method is called koshering.

Kosher salt is said to be free of additives, some brands do contain anti-caking agents. In some regions, this salt is inexpensive, as compared to iodized table salt. When compared to the free-flowing table salt, kosher salt can be easily picked in between the fingers. So, you have control over the measurement.

What Is the Difference Between Salt and Kosher Salt? 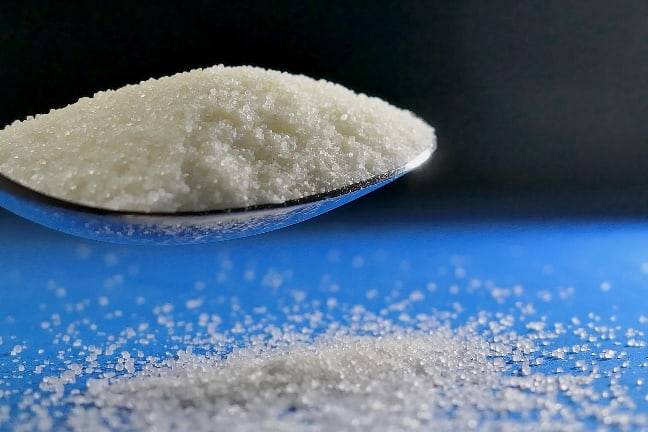 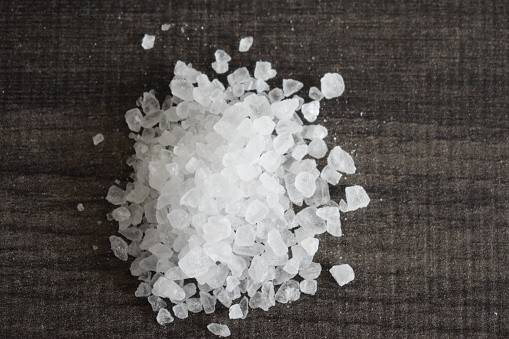 First, we need to define salt. In our culture salt means table salt – the fine salt that’s in the saltshakers in your home and just about every restaurant you’ve ever been to. It comes in a round cardboard container with a spout.

Kosher salt is a larger-grained salt, so much so that you can easily tell the difference just by sight.

How does this happen? Because salt is a crystal, there is more than one way that the crystal can form. When the sodium and chlorine atoms are packed as close together as possible, the salt is fine-grained and heavy (table salt). When the crystals are more open, the salt is lighter and flakier (kosher salt).

To make it even more confusing, there are two major brands of kosher salt: Morton’s in a blue box and Diamond Crystal in a red box. Diamond Crystal has larger grains and is lighter than Morton’s. It’s not unusual to see a recipe that calls for 1 1/2 teaspoons of Diamond Crystal or 1 teaspoon of Morton’s – that’s how much difference there is between the two. If you ask a chef their preference, 99% of the time they’re going to recommend the red box.

Can I Substitute Sea Salt for Kosher Salt? 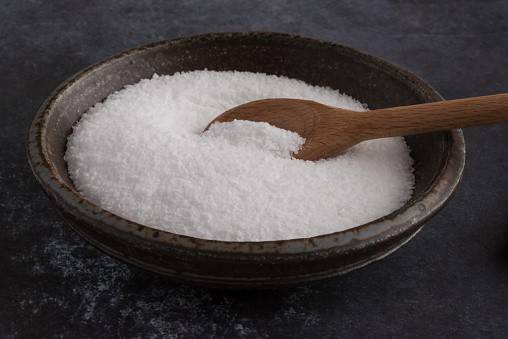 The makeup, size, and density of sea salt are similar to that of kosher salt, so the answer is yes, you can certainly substitute sea salt for kosher salt. The difference between the two comes down to the way sea salt is harvested, and the higher price tag: the grains are created when seawater evaporates.

There are many, many sea salts out there: each defined by where it’s from. Some are very flaky, light, and white and some are very dense and grey. Most cooks who use sea salt have a very firm idea of which one they prefer – it is a personal choice. Because sea salt is one of the most expensive types, it’s traditionally used as a finishing ingredient – sprinkled over a dessert, or on top of food right before serving.

What Is the Advantage of Using Kosher Salt? 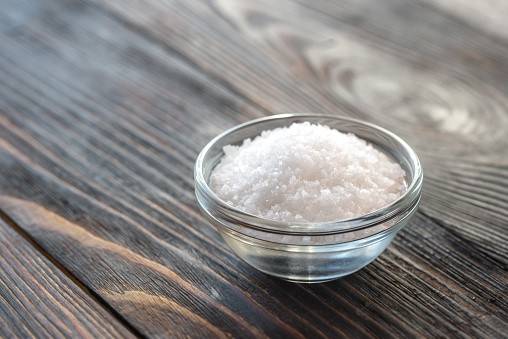 One advantage of using kosher salt is that when you are sprinkling it, you can control where it goes. This is especially important when you’re seasoning savory dishes, particularly meats. You can easily do a little experiment in your kitchen: grab a pinch of table salt and try to sprinkle it evenly onto a plate. It’s so fine that it’s almost slippery, and hard to control where it lands. Now try it with kosher salt and discover the difference. Table salt is often used in baking recipes where you need to measure out a precise amount of salt (the small, compact granules make this easy) but you don’t need to control where the salt lands.

The other advantage is that kosher salt is pure salt, it is never iodized as table salt often is. Iodine has a slightly bitter, metallic taste. When you cook with kosher salt, you omit that flavor.

Can I substitute regular salt for kosher salt?

Yes, you can. Kosher salt is simply table salt that has been processed differently. It is usually sold in larger packages and costs more than regular table salt. It is used to flavor meat, poultry, fish, vegetables, and desserts. It is available in fine, medium, coarse, and flake varieties. Regular table salt is sodium chloride NaCl and is the same chemical compound found in sea salt. Table salt contains no additives and is not processed any differently than other types of salt. It is typically iodized and bleached to remove impurities.

What is kosher salt?

Kosher salt is salt that meets certain requirements set forth by Jewish law. It is produced from seawater using a process called “kashering” from Hebrew kashrut. This involves heating the salt until it becomes liquid, filtering it, and then cooling it down again. The result is a clear, white salt that is free of impurities. It is used primarily in the preparation of food for consumption by Jews who follow the laws of kashrut.

How to measure salt for recipes accurately?

Salt is measured by volume, not weight. One teaspoon of table salt weighs about 4 grams about 1/2 ounce. To convert between teaspoons and tablespoons, multiply the teaspoon measurement by 20. For example, 2 tablespoons equals 1/4 cup.

Kosher salt is used in many dishes because it is free from additives and preservatives. It is usually iodized, meaning it contains iodine, which helps prevent goiter a swelling of the thyroid gland. Kosher salt is available in fine grain, medium grain, coarse grain and flake varieties. Fine grain salt dissolves quickly and evenly, while coarse grain salt provides a stronger flavor. Flakes are ideal for sprinkling on top of salads, vegetables and pasta dishes.

Sea salt is a natural form of salt derived from evaporated sea water. It is not processed or refined. Sea salt is harvested from seawater using evaporation techniques. It does not contain any additives or preservatives. It has a milder taste than table salt. It is available in fine, medium and coarse grinds. Table salt Answer: Table salt is sodium chloride NaCl dissolved in water. It is produced by heating brine until the solubility of NaCl reaches saturation. It is the most common type of salt used in kitchens. It is available in different sizes and forms. It is generally used to season food. It is available in granular, flaked, cube, and crystal forms.

Pickling salt contains about 50% sodium chloride NaCl and 50% potassium chloride KCl. It is used mainly for pickling vegetables and fruits. It is available in several types such as granulated, flake, and cube. Salt substitute Answer: Salt substitutes are salts that are added to foods to replace the salt normally found in them. These products are used to reduce the amount of salt consumed by people who suffer from hypertension, heart disease, kidney problems, diabetes, or other conditions where salt intake needs to be controlled. Salt substitutes are usually composed of potassium chloride and/or magnesium chloride.

Fine sea salt is a type of salt that is harvested from ocean waters. It is naturally occurring and does not contain any additives. It is generally used in cooking because it adds flavor to dishes.

Kosher salt is not the same as regular table salt. It contains no additives and is used primarily for baking and other culinary applications. Kosher salt is produced from pure sodium chloride NaCl crystals. In order to convert kosher salt into sea salt, simply dissolve 1/4 cup of kosher salt in 2 cups of warm water. Let cool completely and strain through cheesecloth. Store in airtight containers.

Can I use iodized salt instead of kosher?

Yes, you can use regular table salt instead of Kosher salt. However, if you are using a recipe that calls for Kosher salt, you cannot substitute regular salt.

How much salt do I substitute for kosher salt?

Can you replace kosher salt with regular salt?

Yes, you can use iodized salt instead if you prefer. However, the taste of the food will not be the same. Salt is used to enhance flavor. Kosher salt contains iodine which helps maintain healthy thyroid function. It also helps prevent goiter swelling of the neck.

How do I convert kosher salt to sea salt?

Kosher salt is a type of sea salt that contains no additives. It is used primarily for religious reasons. Kosher salt is not only used for religious ceremonies but also for cooking. It is used in many different types of dishes such as salads, soups, stews, and even desserts. Kosher salt is available in fine grain sizes from coarse to extra fine. Fine grain is ideal for sprinkling on top of foods while medium grain is good for adding flavor to sauces and gravies. Coarse grain is great for seasoning meats and vegetables.

Most of us would agree that coffee tastes great. Some even say it has health benefits. But how long does it take for caffeine to get into our bloodstream after drinking it? Coffee is one of the top beverages consumed around the world. According to the National Coffee Association, Americans consume over $150 million worth…

Do you think you could eat mushrooms every day without having to worry about spoilage? Well, you might want to think again! Mushrooms are one of those foods that tend to get better after being refrigerated. However, there are certain things you need to keep in mind before storing them. In this blog post, I’m…

Mangoes are delicious fruits that come from tropical countries around the globe. They are also very nutritious. Unfortunately, they can also cause some serious health problems. How do you know if a particular mango is safe or not?Mangoes are rich in vitamin C, potassium, fiber, folate, iron, calcium, magnesium, copper, manganese, phosphorus, zinc, niacin, riboflavin,…

Are you wondering whether or not you should freeze food before using its expiration date?If you’ve ever bought a package of frozen chicken breasts, you might have noticed that they often come with a label indicating the "use-by" date. This means that the meat has to be consumed within a certain time frame after being…

Coconut oil has become very popular over the last couple of years. The benefits of using it as a beauty treatment are numerous. Many people swear by its ability to improve their skin condition. Is it safe to use coconut oil on my face or body?Coconut oil is extracted from the fruit of the coconut…