Sweetened condensed milk is the go-to ingredient for some of the best sweet treats around! This thick creamy milk variation is so tasty that some people even like to sneak a little taste before adding it to their recipe.

When you need the very best sweetened condensed milk substitute to use in a cooking or baking recipe, look no further than this handy guide! You’re sure to have plenty of great alternatives on hand to round out your dish without skipping a beat! 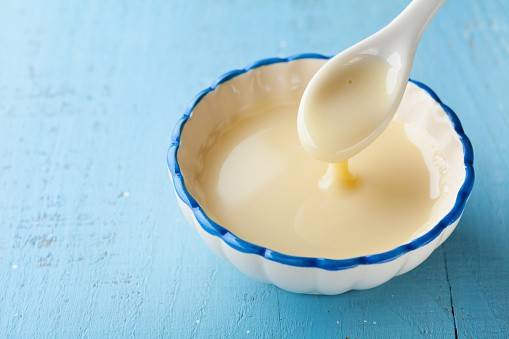 As the name suggests, evaporated milk is cow’s milk that has been heated until more than half (roughly 60 percent) of the water content evaporates. It is then homogenized, canned, and sold as a shelf-stable product that can survive for more than half a year in the pantry. Evaporated milk can be used as a 1:1 substitute for cream or half and half in everything from soups and cream sauces to custards and baked goods. It’s also a suitable stand-in for regular milk when mixed with water (add 1 ½ can of water for every full can of evaporated milk). Needless to say, evaporated milk can do quite a lot in the kitchen—though if you’re planning on drinking a diluted glass of the stuff, you will taste the difference.

What is condensed milk? 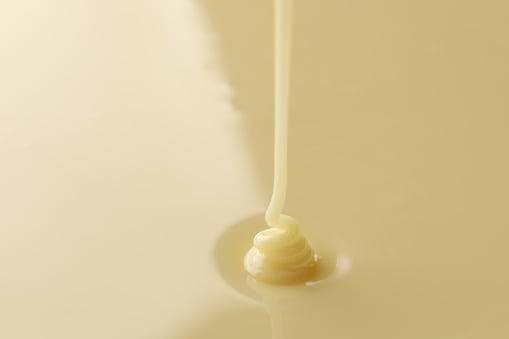 What is Sweetened Condensed Milk Used for?

While the creation of sweetened condensed milk was originally to find a milk product that wouldn’t spoil, this delicious dairy product is now used in many delicious dishes worldwide.

In Thailand, sweetened condensed milk is added to brewed coffee or tea to make a creamy sweet drink. In Mexico, it is the base for rich rice pudding. In the United States, it is a popular base for pies, cakes, and other sweet treats.

One of the most popular uses for sweetened condensed milk is to make rich creamy caramel(s)!

You’ve probably figured this out already, but there’s only one difference between evaporated and condensed milk, and it’s a big one: Evaporated milk is unsweetened and condensed milk has loads of sugar added. As such, these two shelf-stable milk products have very different culinary applications—so whatever you do, don’t try to use them interchangeably.

Can I use Evaporated Milk instead?

Evaporated milk is a variation that will not spoil easily and has a long shelf life. This is because it is made in a similar way to sweetened condensed milk.

With a similar consistency to sweetened condensed milk, it works well as a simple substitution in any recipe. The only thing missing is the sweetness. Therefore, you may want to add a bit of sugar to get the desired flavor.

Use evaporated milk in an easy 1:1 substitution for sweetened condensed milk in any recipe. If you want to add sugar, begin with one tablespoon, and add more as needed. 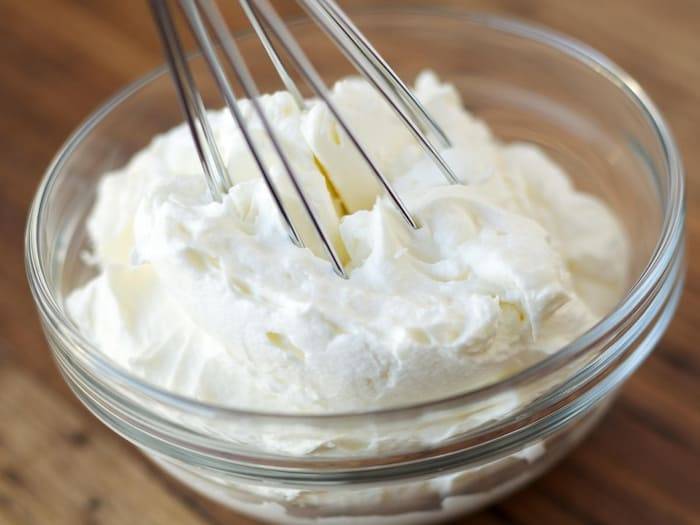 If you don’t want to go through the hassle of heating the milk to reduce it, use heavy cream instead. Heavy cream (or heavy whipping cream) already has a thick consistency like sweetened condensed milk.

Simply mix 1 cup of heavy cream with ¼ cup of sugar to get a creamy rich alternative. You can use this as a 1:1 exchange for sweetened condensed milk in any recipe. 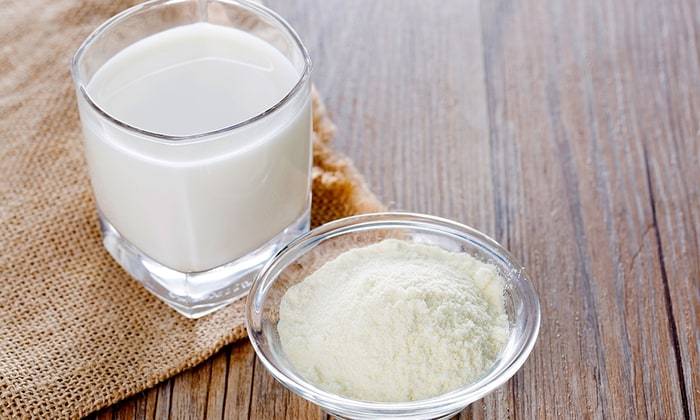 Like sweetened condensed milk, powdered milk is another shelf-stable milk product. It is probably less popular to have on hand though (unless you have food storage).

Powdered milk will lack the rich flavor of sweetened condensed milk, so consider adding 2 tablespoons of butter and a pinch of sugar.

Use the rehydrated powdered milk in a 1:1 substitution for sweetened condensed milk. 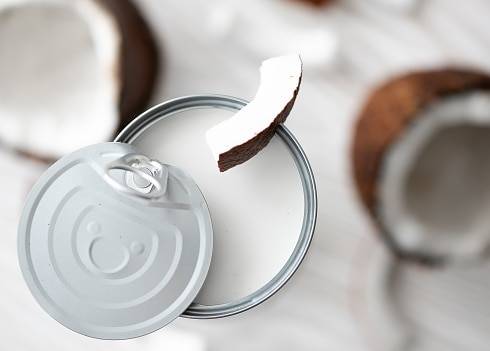 Look for canned coconut milk, preferably the regular full-fat version. While full-fat coconut milk has a nice rich creamy base, to begin with, it does need to be thickened a bit before it can be used. It also needs a touch of sweetness.

Mix a 13.5-ounce can of full-fat coconut milk with a ¼ cup of sugar in a saucepan. Simmer over low heat for 30 minutes, stirring regularly.

Once it has thickened, remove it from the heat, and let it cool. Use in a 1:1 exchange for sweetened condensed milk.

Evaporated milk has a long shelf life, but does it really taste better than sweetened condensed milk?
If you want to save some time, you can easily swap them out for each other.
Evaporated milk is a thick liquid produced from skimmed or partially skimmed milk.
The milk undergoes heat treatment at high temperatures to remove water, resulting in a concentrated form of milk fat.
Sweetened condensed milk is similar to evaporated milk, except it contains sugar instead of lactose.
You can replace evaporated milk with sweetened condensed milk without sacrificing flavor.
In fact, they both contain the same amount of protein, calcium, phosphorus, potassium, sodium, iron, zinc, vitamin B12, riboflavin, niacin, thiamine, folate, pantothenic acid, biotin, copper, manganese, selenium, iodine, magnesium, phosphorous, and vitamins D2 and E

Can I substitute sweetened condensed milk for evaporated milk?

Why would you need an alternative?

Evaporated milk is a great way to cut down on fat content in baked goods. However, it does not thicken well, making it difficult to incorporate into recipes. Sweetened condensed milk is thick enough to easily blend into any recipe. It also contains no cholesterol, unlike regular milk.

If you are lactose intolerant, you cannot digest dairy products such as milk, cheese, butter, cream, ice cream, yogurt, sour cream, cottage cheese, ricotta cheese, and other dairy products. Lactose intolerance occurs when the body does not produce enough lactase enzyme to break down the sugar component of these products. This results in symptoms similar to diarrhea.

Lactose intolerance is a condition where people who consume dairy products experience gastrointestinal discomfort. It is caused by a deficiency of lactase, an enzyme produced by intestinal cells that breaks down lactose milk sugar into glucose and galactose. Symptoms of lactose intolerance include abdominal pain, bloating, gas, nausea, and diarrhea. People with lactose intolerance usually feel better after consuming non-dairy alternatives such as soy milk, almond milk, coconut milk, and rice milk.

What to think about when selecting an alternative?

Vegetarians tend to eat fewer calories than people who consume meat, but they still need to read what they eat. Vegetarian diets are usually lower in saturated fats and cholesterol than omnivorous diets, but they can be high in carbohydrates and fiber.

A calorie is a unit of energy used to measure the energy content of different foods. It is equal to 4.184 kilojoules kJ or 1 kilocalorie kcal. A gram of carbohydrate contains four calories, while a gram of protein contains only two. Fat contains nine calories per gram. One gram of alcohol contains seven calories.

Calories are the main source of energy in our body. We get energy from carbohydrates, fats and proteins. Each type of food provides us with a specific amount of energy. For instance, a cup of cooked pasta provides about 100 calories, while a cup of milk provides around 80 calories. Carbohydrates Answer: Carbohydrates are the primary source of energy in our bodies. They provide us with energy for daily activities such as walking, talking, thinking, working, playing sports, and even sleeping. Carbohydrates are found in fruits, vegetables, breads, cereals, potatoes, beans, legumes, and dairy products.

Food allergies are caused by an immune system response to certain substances in food. Food allergies can range from mild reactions such as rashes to severe reactions such as anaphylaxis. Foods that are common allergens include peanuts, tree nuts such as almonds, walnuts, pecans, fish, shellfish, eggs, wheat, soybeans, milk, and other plant-based proteins. Nutrition Answer: Nutrients are essential nutrients required by the human body for growth, development, maintenance, and repair of tissues. These nutrients are obtained from food. A healthy diet consists of a combination of protein, carbohydrate, fat, vitamins, minerals, fiber, and fluids.

Can I use evaporated milk instead of sweetened condensed milk for fudge?

What is the difference in sweetened condensed milk and evaporated milk?

Fudge is a sweet confectionery made from sugar, butter, cream, eggs, and vanilla extract. It is usually cooked until thick and smooth. Fudge is typically served hot but can also be refrigerated or frozen. To store fudge, place it in a container lined with wax paper. Cover the container tightly and let stand at room temperature for 24 hours. Refrigerate the fudge if desired.

How do you store fudge with evaporated milk?

Can you replace condensed milk with evaporated milk?

Tadpoles are tiny amphibians that live in ponds and streams. They look cute and harmless, but they aren’t exactly the healthiest snack. Can you really eat them?Tadpoles are considered a delicacy in some parts of Asia. In Japan, they are eaten raw or boiled and served as part of a meal. Some people even consider…

Kosher salt is considered to be a higher quality salt than regular table salt. Is it really worth the extra cost?KOSHER SALT IS MADE FROM THE SEA AND IT’S MORE PURE THAN TABLE SALT. BUT DOES THAT MEAN YOU SHOULD USE IT OVER REGULAR TABLE SALT?Yes, you should definitely use kosher salt over regular table…

Have you ever wondered if baked beans are good for longer than the recommended time period? Baked beans are a classic British food that’s been around since the early 1900s. They’re often served cold and eaten with bread. However, there’s no set rule on how long you should keep them in the fridge. Baked beans…

You’ve heard of almond milk, soy milk, coconut milk, and even rice milk. Now, there’s also oat milk. What makes this new type of milk unique? Is it really worth switching from dairy milk? Oat milk has become very popular over the last decade. The demand for this drink has increased due to its health…

If you want to get into shape, you need to eat less and exercise more. But how much time should you spend exercising each day? There’s no set answer to this question, but there are some general guidelines. Here’s an article explaining how long it takes to burn off 100 calories through different activities. An…