Mixing bleach and vinegar is not safe. Bleach reacts with the acetic acid in vinegar to produce toxic chlorine gas. Chlorine is a yellowish-green gas that attacks mucous membranes and the respiratory system and can be potentially fatal.

What Happens When Bleach and Vinegar Are Mixed 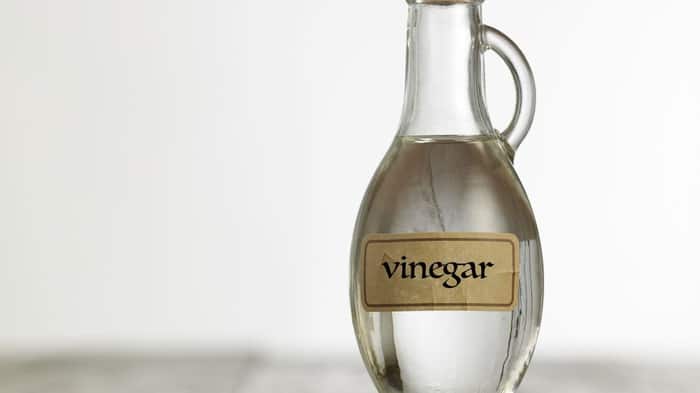 Chlorine bleach contains sodium hypochlorite (NaOCl), but because it’s dissolved in water, the chemical exists as hypochlorous acid (HOCl): NaOCl + H2O ↔ HOCl + NaHypochlorous acid is so good at bleaching and disinfecting because it’s a strong oxidizer. This also makes it good at participating in undesirable chemical reactions. Mixing bleach with acid produces chlorine gas. For example, reacting bleach with hydrochloric acid makes water and chlorine: HOCl + HCl ↔ H2O + Cl2Vinegar contains diluted acetic acid rather than hydrochloric reaction, but chlorine is still produced:2HOCl + 2HAc ↔ Cl2 + 2H2O + 2Ac3COO) An equilibrium exists between the different chlorine-containing species. At low pH (which you get when adding vinegar or toilet bowl cleaner), the reaction favors the production of chlorine gas. In contrast, increasing the pH favors the conversion of chlorine gas into the hypochlorite ion. Hypochlorite is not as good an oxidizer as hypochlorous acid, which is why some people intentionally lower the pH of their bleach.

What to Do If You Mix Bleach and Vinegar 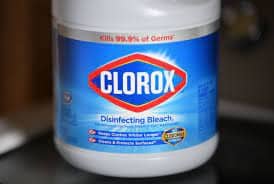 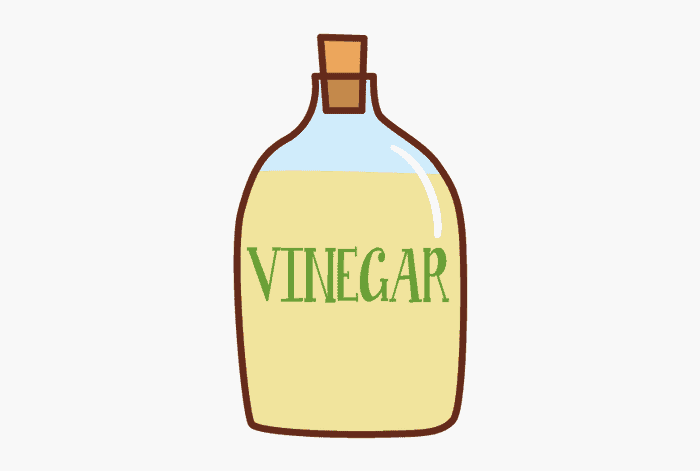 You’ll know there’s a problem if the liquid suddenly smells very strongly of bleach (which is the odor of chlorine). If you see a faint yellowish-green haze, it’s a sign of significant chlorine gas production. But both bleach and vinegar are dilute, so generally, the gas is invisible. Avoid breathing the vapor and immediately leave the area. Return only after the chlorine odor has dissipated. Immediately seek medical attention or call Poison Control if you experience burning or blistering eyes, skin, or mucous membranes or have trouble breathing.

It’s fine to use both vinegar and bleach to clean and disinfect, providing you thoroughly rinse the surface with water before switching products. Instead of adding vinegar to bleach water to increase its effectiveness, just buy a fresh bottle of bleach. Bleach loses its activity over time, so a new bottle is stronger than one that has been stored for several months.

Bleach and Other Chemicals

Vinegar isn’t the only chemical that produces a nasty reaction when mixed with bleach. Mixing bleach with any acid, alcohol, peroxide, or ammonia releases toxic fumes. Bleach mixed with ammonia makes chloramine gas, which can cause chest pain and shortness of breath. Bleach and alcohol make chloroform, which is a central nervous system depressant that could cause unconsciousness and respiratory failure. Bleach with peroxide forms irritating and corrosive peracetic acid.

Learn More:  How do you know when potatoes are done boiling?

Can You Mix Bleach and Vinegar to Kill Mold?

If you have just spotted mold growing in your home, you are probably searching for a quick way to get rid of it before the spread gets worse.

Lucky for you, many easy-to-use home remedies can quickly clear up small mold infestations in no time at all.

One of the more commonly used mold infestation solutions is a combination of bleach and mold in the affected area. Read whether our expert team at All Dry USA thinks this concoction works!

Is it Possible to Use a Bleach and Vinegar Combination to Kill Mold?

To start, let’s look at both bleach and vinegar and what they can do to kill mold.

Most people assume that bleach is a cure-all for mold issues. It is indeed a very strong cleaner and it will kill mildew. Bleach can kill off mold, but it is not as effective as vinegar. That’s because vinegar seeps into porous materials that mold grows on, such as wood. Bleach is a great surface cleaner but has difficulty removing spores because it doesn’t seep into the material below the surface layer.

So, now we know that these cleaners can kill bleach with slightly different outcomes. The question becomes: are two solutions more effective when combined?

The answer is yes; a combination of bleach and vinegar is a powerful chemical that is guaranteed to kill, if not remove, the mold growth in a specified area.

If you have tried other store-bought cleaners and haven’t had any luck, then this may be the perfect home remedy you have been looking for! 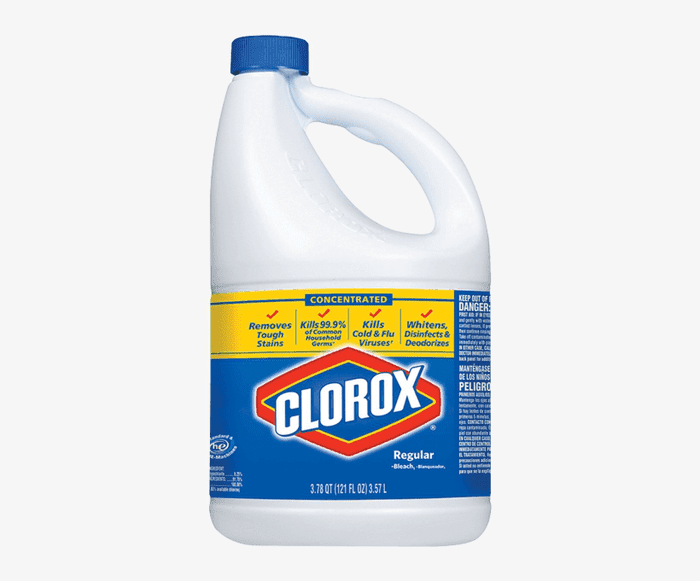 If there is a situation where you need to be diligent about disinfecting your home, the CDC recommends using bleach, hydrogen peroxide, or another alcohol-based disinfectant. If you do, follow the product’s instructions diligently, wear gloves, open windows, and say it with me this time! don’t mix it with other cleaners.

This ad is displayed using third-party content and we do not control its accessibility features. 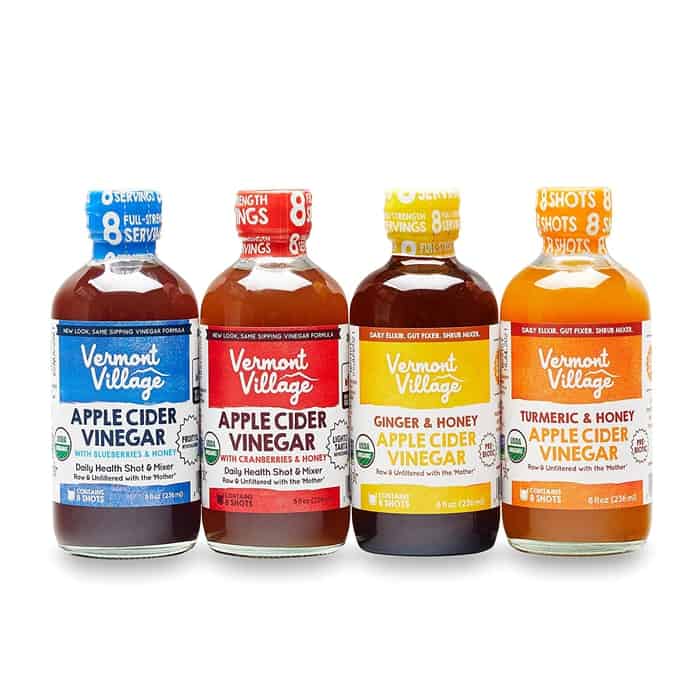 If you’re just looking to refresh surfaces or get rid of greasy buildup, that’s where vinegar-based cleaners come in handy. They don’t come with as many health concerns and are suitable for many types of materials.

Simply combine vinegar (white or apple cider, but white tends to be more effective) with an abrasive like baking soda for a quick cleaner to clear up bathroom or kitchen drains refresh washing machines clean toilets, and more.

Learn More:  Can I use hot cocoa mix instead of cocoa powder?

Again, to exercise extra caution, don’t use them on or near surfaces that you’ve already cleared with a bleach-based product.

Have you ever wondered why some cleaning solutions are labeled as being safe for both humans and pets?
Well, it turns out that they aren’t always safe after all.
In fact, mixing them together can cause serious health issues.
White vinegar is a great household cleaner because it’s cheap and effective.
Bleach is also very useful for killing germs and bacteria.
The problem arises when you combine these two ingredients.
While each ingredient has its own benefits, combining them can create a dangerous chemical reaction.
Mixing white vinegar and bleach together can produce chlorine gas, which is extremely toxic.
If you accidentally spill or inhale the mixture, you could suffer from severe respiratory problems.
This is why it’s important to read labels carefully before buying cleaning supplies

Can you mix white vinegar and bleach?

Yes, you can mix white vinegar and bleach. It depends on what type of bleach you use. Bleach comes in different types such as chlorine bleach, sodium hypochlorite, and potassium dichromate. Each type of bleach has a different pH level. Chlorine bleach pH 9 is alkaline while Sodium Hypochlorite pH 12 is acidic. Potassium Dichromate pH 13 is neutral. White Vinegar is acidic and bleaches are alkaline. So mixing these two together will not affect each other.

How long does chlorine gas take to kill?

Chlorine gas takes about 30 minutes to kill. It is very dangerous and poisonous. Chlorine gas is used to disinfect drinking water. It kills bacteria and viruses in water. It is also used to clean swimming pools.

Symptoms of exposure to chlorine gas produced by mixing of white vinegar and bleach:

Chlorine gas is a colorless, odorless, tasteless, nonflammable gas. It is highly toxic and corrosive. It is used to disinfect drinking waters. It kills bacteria and virus in water. It is used to clean swimming pools and other bodies of water. Symptoms of exposure to chlorine gas: 1. Headache 2. Nausea

Learn More:  Can I use hot chocolate mix instead of cocoa powder?

Chlorine gas is a colourless, odourless, tasteless, flammable gas. It is very poisonous. It is used to kill germs and bacteria in water. It is also used to clean swimming pools. Symptoms of exposure to chlorinated water: HeadacheNausea

Tips to safely use these two compounds:

Salt has long been considered a necessary part of our diet. But did you know that some people are actually allergic to it? What does this mean for those who suffer from such allergies?Salt is essential to human life. It helps regulate blood pressure, keeps us hydrated, and plays a role in digestion. However, too…

Eating too much food isn’t good for anyone. But does overeating cause illness or health problems?The human body has a limited ability to store energy. When we eat, our bodies break down stored fat into glucose blood sugar and release it into the bloodstream. This helps us stay energized throughout the day.But over time, the…

Unsalted butter has become a thing of the past. Nowadays, most people prefer using margarine or other types of spreads instead of butter. What can I substitute for unsalted butter?Unsalted butter is a staple ingredient in baking recipes. It adds richness and flavor to baked goods such as bread, cookies, cakes, muffins, and brownies.Butter substitutes…

Have you ever wondered why some food items taste better after they’ve been left out for a while? The answer lies in their natural flavors. Vanilla extract is no exception.Vanilla extract is a concentrated form of vanilla flavor. It contains vanillin, a compound found naturally in vanilla beans. This extract is often added to baked…

You’ve heard the saying ‘out of sight out of mind’ – well, it applies to clothes too. If you put them away in the back of your wardrobe or under your bed, they’ll soon disappear into oblivion. And then you’ll wonder why you never wear them anymore.The average person owns around 20 pairs of jeans,…