A compote is a fruit preserve that has been cooked down until thick and syrupy. It’s often used as an accompaniment to desserts such as cakes and pies.

Compotes are usually made using sugar, water, and sometimes other ingredients like lemon juice or vinegar. They’re typically served warm or at room temperature.

A confit is a French term used to describe a slow-cooked dish. It’s usually made using duck fat, but other fats such as goose fat, pork fat, beef fat, etc. can also be used.

When making a confit, you want to cook the meat slowly at low temperatures for a long period of time. The result is a rich, flavorful, melt-in-your-mouth piece of food.

The sauce is a term used to describe a liquid that has been mixed with other ingredients to create a new product. Sauces are usually used to add flavor to food, but they can also be used to thicken sauces, give foods a different texture or even change their color. There are many types of sauces, including ketchup, mustard, barbecue sauce, salad dressing, gravy, and tomato sauce. Some sauces are served hot while others are served cold.

When you read a gourmet recipe, you’ll come across new terms and cooking processes, each with a fancy new name that doesn’t seem like something you’d hear in a kitchen. However, they are present and glaring at you, and you may want assistance in understanding some of them.

Worse, it’s often difficult to tell how some of them vary from others. So you’re left scratching your head, and that’s where we come in. Compote, confit, and how they’re any different from a sauce are some of the worst offenders when it comes to perplexing terms. Allow me to explain.

Contents show
1 Compote vs confit vs sauce
1.1 The compote is cooked quickly, but the sauce and confit take longer.
1.2 While vegetables may be present in the confit and sauce, the compote is only composed of fruit.
1.3 Sauces may be thickened while compote and confit are not
2 Is compote a sauce?
2.1 Related Posts

Compote vs confit vs sauce

Let’s start by looking at what these three words mean. A compote is simply a sweetened fruit puree that’s cooked down into a syrup. This type of preparation dates back centuries; however, it was only recently that this word became popularized.

Confits were first created during the Middle Ages. These dishes were originally prepared using animal fat which gave the finished products a deep, savory taste. Today, most people use vegetable oil instead of animal fat because it gives the final product a lighter flavor.

The sauce is another confusing term. In culinary school, I learned that there are two main categories: thin and thick. Thin sauces have very little body and tend to cling to whatever they’re applied to. Thick sauces have more substance and don’t adhere well to anything.

The compote is cooked quickly, but the sauce and confit take longer.

Now let’s look at the differences between these three items. First off, all three contain fruits, vegetables, nuts, seeds, herbs, spices, and/or meats. But one thing sets them apart: the length of cooking time. 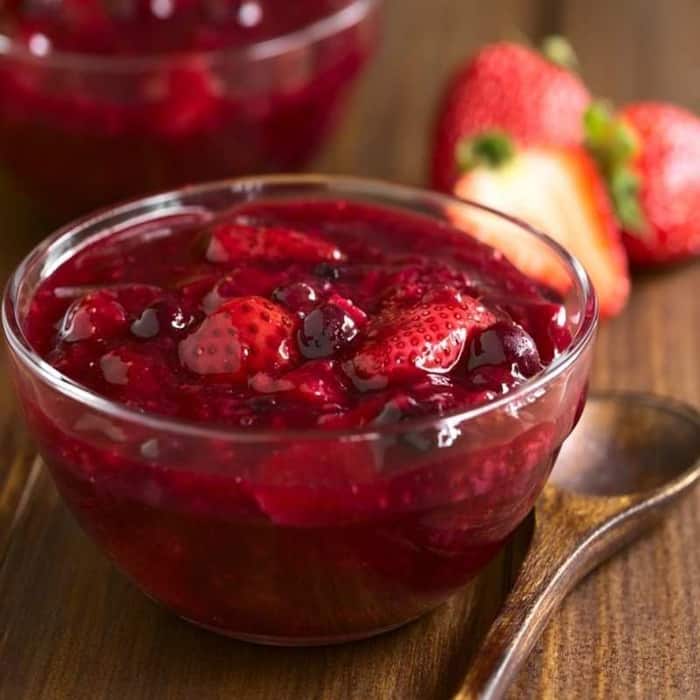 While both compote and sauce require minimal cooking times, confit takes much longer. To make a good confit, you need to simmer the item for several hours over medium heat.

Compote is a dessert made with a mixture of water, fruits, sugar, and spices that is softly boiled and served. In fact, canned fruits are a type of compote! Yep. Sauces, on the other hand, require longer to prepare since they must account for a variety of factors such as flavor extraction, emulsion, thickening, simmering to combine tastes (such as tomato sauce), and so on. A fast sauce can be made, but most require a long time to cook to perfection.

While vegetables may be present in the confit and sauce, the compote is only composed of fruit.

Next up, we’ve got the difference between compotes and sauces. Both include fruits, vegetables, nuts and seeds, and meat. The key distinction here is that compote contains no dairy, whereas sauces do.

A compote is just fruit alone. You won’t find any added fats, sugars, salt, or seasonings. On top of that, it’s not cooked. Instead, it’s gently simmered until soft enough to eat. Furthermore, it doesn’t get thicker as a sauce does.

The sauce has many ingredients including milk, cream, butter, eggs, cheese, flour, etc. They’re usually used to create an emulsified base that allows flavors to permeate throughout the dish. Finally, we’ll talk about the difference between compote and confit. While both consist of fruit, vegetables, nuts, and seeds, they differ greatly in their composition.

When preparing any of them, another key distinction is the ingredient list. Sauces can be anything you want them to be, including chutney, ketchup, soy sauce, cranberry sauce, chocolate topping, gravy, and so on. You can obtain anything: fruit, spices, vegetables, meat juices, and so forth. Confit is made with meat, vegetables, or fruits, but never all three at the same time. They’re designed to be kept and are classified as different types of food. Aside from water and sugar, the only other ingredients in a compote are fruit and water.

Sauces may be thickened while compote and confit are not

Sauces are the only ones thickened with anything added specifically for that reason when it comes to texture. Fruit confits like jam and marmalade can also be thickened, although this is a side effect of the pectin in the fruit. The pectin in the fruit is intended to set it, not thicken it. 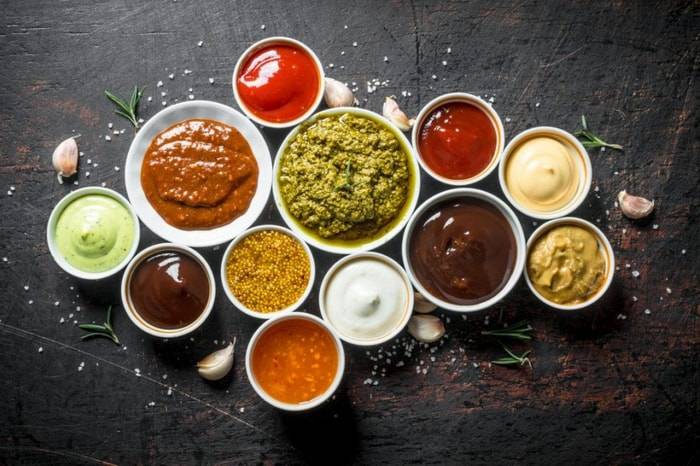 Compotes are the loosest of the group since they aren’t thickened. The sole thickening agents are the pectin in the fruit and the sugar syrup. It’s not even close to being as thick as a confit. Sauces, on the other hand, are frequently thickened with flour, cornstarch, or something similar to provide a more viscous consistency. Additionally, there are some sauces that have been thickened by adding egg yolks. This creates a creamy texture.

Finally, let’s discuss what makes each one unique. Compote is simply fruit mixed together with water and sugar. There isn’t much else going on. If you add additional ingredients, then it becomes a sauce. For example, if you mix apples into your compote, it will become a sauce.

Is compote a sauce?

If you were to ask someone who knows nothing about cooking whether or not compote was considered a sauce, I’m sure most people would say yes. However, if you asked me, I’d tell you that it’s neither.

A true sauce should contain fat, which compote lacks. In addition, a sauce must be able to withstand heat without breaking down. That means that it needs to be thickened. A good way to think about this is to imagine how a sauce behaves during boiling. When heated, liquids expand due to vapor pressure. As long as the liquid expands less than its container, the sauce remains intact. But once the volume increases beyond the capacity of the vessel, the sauce breaks apart.

In contrast, compote is very thin because it contains no oil or fat. And unlike a sauce, it cannot stand up to high temperatures. Because it contains big pieces of fruit and sugar syrup, compote is not a sauce. Fruit sauces, on the other hand, are always chopped, mashed, or pureed. A sauce’s entire purpose is to be runny and spreadable. A cranberry sauce made with fresh cranberries is the chunkiest sauce you can make. Compote isn’t a sauce, so don’t confuse the two. Its sugar syrup is too thin and contains too few components to be termed a sauce.

I hope this article helped you understand the difference between the three and all your food curiosities are resolved.

Do you ever eat food that’s been frozen too long and then reheated? If so, you might want to think twice before doing so. If you don’t believe me, read this article. I’m sure you’ll agree that this is a pretty scary thought. When to discard Food With Freezer Burn? Freezer burn happens when food…

Cocoa butter has become very famous lately because of its amazing properties. It helps reduce wrinkles, moisturize skin, and even heal scars. If you want to try it out, here are some things you should know before using it.Cocoa butter is derived from the seeds of the cacao tree. It contains antioxidants, vitamins, minerals, and…

Do you ever wonder if there’s anything wrong with eating Thai food with chopsticks? Thai food is often served with chopsticks. This is because the rice noodles are very slippery and tend to stick together. If you don’t want to risk breaking your chopsticks, then you should definitely try using them. There are many different…

Is your kitchen low on oil? And you feel like it is pointless to have two nearly empty bottles on hand? You are definitely thinking if the two oils can be mixed. The good news is that you are not alone in this dilemma, and I am here to assist you. As per market research…

Changes in the color of the skin Skin color changes because of many reasons such as sun exposure, age, diet, medications, hormones, genetics, and disease. Skin pigmentation is controlled by melanocytes, cells that produce pigment (melanin) in the skin. Melanin protects the skin from ultraviolet radiation and helps prevent sunburn. It also plays a role…

Do you ever wonder if you should throw away those lemons that are starting to get soft? Or maybe you want to know if you can freeze them before they go bad. If you don’t know much about freezing food, then you might be wondering whether you can freeze lemons. In this article I explain…