Vinegar is a sour liquid produced by the fermentation of alcohol and acetic acid. It is used as an ingredient in cooking and as a preservative. Vinegar has been used since ancient times for its medicinal properties.

Apple cider vinegar has been used for centuries to treat various ailments. It’s also an ingredient in many beauty products. So, what exactly is apple cider vinegar, and what makes it different from white vinegar?

White vinegar is the same thing as apple cider vinegar except that it’s been filtered. It’s usually sold in a clear bottle and comes in a variety of flavors.

Apple cider vinegar is unfiltered and contains enzymes, minerals, and other nutrients that are beneficial for your health. It’s often used to cure colds and flu and is known to boost energy levels.

Contents hide
1 What’s the difference between apple cider vinegar and white vinegar?
2 Where Vinegar Comes From?
3 What is Apple Cider Vinegar?
3.1 How is apple cider vinegar made?
3.2 What to Use Apple Cider Vinegar For?
4 What is White Vinegar?
4.1 How is white vinegar made?
4.2 What to Use White Vinegar For?
4.3 1) Clean Your Kitchen Equipment
4.4 2) Remove Rust From Metal Cookware
4.5 3) Make A Household Allergen Spray
4.6 4) Get Rid Of Mold On Food Products
4.7 5) Keep Insects Away From Plants
4.8 Related Posts:

What’s the difference between apple cider vinegar and white vinegar?

Apple cider vinegar is a popular ingredient in home remedies and natural beauty treatments. It has been used for centuries to treat various ailments and conditions. 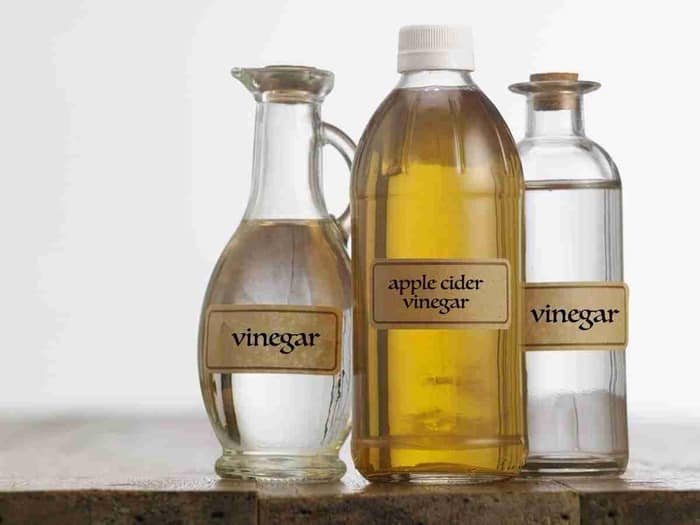 But what exactly is apple cider vinegar? And what makes it different from regular white vinegar?

White vinegar is simply distilled vinegar. Apple cider vinegar is a fermented product. It is made by fermenting fresh-pressed apple juice. The process involves adding bacteria to the juice to produce acetic acid. White vinegar contains between 5% and 10% acetic acid, making it the most potent of the vinegar. It’s clear in appearance and has a crisp, acidic flavor. Acetic acid levels in apple cider vinegar range from 4% to 6%. It’s light-brown in hue and tastes like fermented apples, sweet and sour.

Where Vinegar Comes From?

There are two main ways to make vinegar: through chemical or biological processes. Chemical methods use heat and pressure to break down sugars into ethanol and carbon dioxide gas. This method produces high yields but requires expensive equipment.

See also  Can you eat a horse apple?

Biological methods involve using microorganisms such as yeast and bacteria to convert sugar into organic acids. These organisms can be found naturally in fruits and vegetables. They’re added to fruit juices before they undergo pasteurization. Pasteurized juice is then stored at room temperature until it ferments. During this time, yeasts feed off the sugar content of the juice producing lactic acid which gives vinegar its distinctive taste.

The name vinegar comes from the Latin word vinum meaning "wine." In fact, when you think about it, all vinegar has something in common with wine – namely their alcoholic nature. However, unlike wine, vinegar does not contain any grapes.

What is Apple Cider Vinegar?

Apple cider vinegar is a type of vinegar produced from fermented apple juice. It is used as a flavoring agent in many dishes. It is available in different forms such as white vinegar, red wine vinegar, balsamic vinegar, malt vinegar, rice vinegar, sherry vinegar, and distilled vinegar. 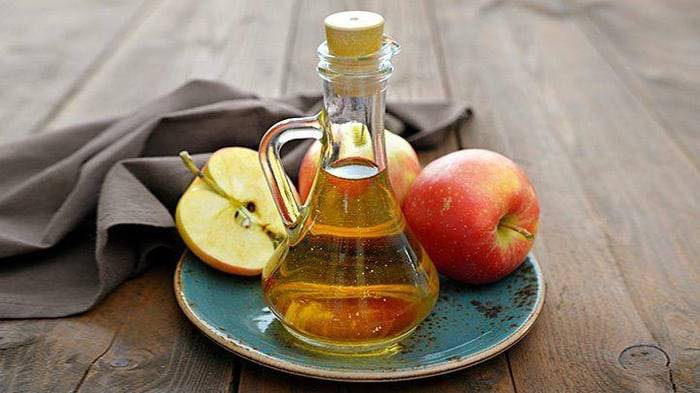 Vinegar is generally considered one of the oldest food preservatives. Its history dates back thousands of years. Ancient Egyptians were among the first people who discovered how to preserve foods by fermentation. Today, there are more than 3,000 types of vinegar on the market. Each kind offers unique characteristics depending upon where it was grown, processed, bottled, and aged.

How is apple cider vinegar made?

To create apple cider vinegar, raw apple juice must be pressed and strained. Then, the liquid is mixed with water and inoculated with selected strains of beneficial bacteria that will help turn the juice into vinegar. After several days, the mixture begins to bubble and foam up. When bubbles stop rising, the vinegar is ready.

Alcoholic fermentation occurs during the production of vinegar. Alcohol is created when the glucose present in the apple juice reacts with oxygen. As alcohol builds up, the pH level drops causing the solution to become less alkaline. To prevent spoilage, an additional amount of salt is usually added to keep the pH stable. Once the desired strength is reached, the vinegar is filtered out leaving behind only the sedimentary particles.

What to Use Apple Cider Vinegar For?

You’ll find apple cider vinegar in your kitchen cupboard for countless uses. You may have seen it listed under other names including malt vinegar, pickling vinegar, and salad dressing. Here are some ideas for what to do with it:

See also  What Happen If You Leave The Refrigerator Door Open

• Season vegetables before cooking them.

What is White Vinegar?

White vinegar is also known as acetic acid vinegar. Acetates are organic compounds containing carbon atoms bonded together via single chemical bonds. The most common acetate found in nature is ethanol. Ethanol can combine with hydrogen ions to form ethyl alcohol which has been called "vinegar" since ancient times. In fact, the word "Aceto," meaning vinegar, comes from this Latin root. 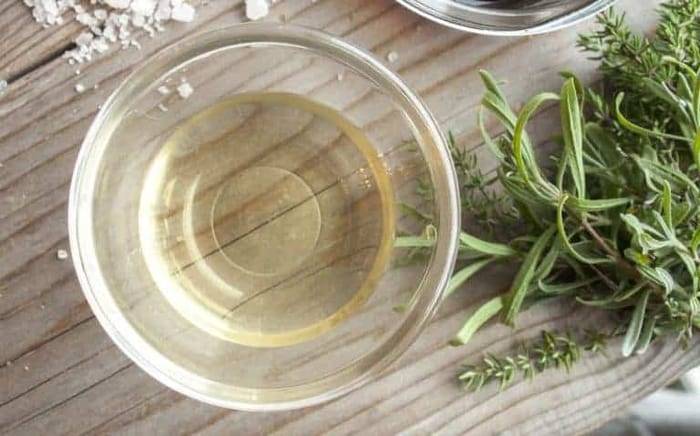 How is white vinegar made?

Because white vinegar is diluted with water, it doesn’t require any preservatives. Therefore, you don’t need to worry about storing it properly. If stored correctly, white vinegar will last indefinitely without spoiling.

What to Use White Vinegar For?

You’ll find many uses for white vinegar besides making your own salad dressing. Here are some ideas:

Add one cup of white vinegar to two gallons of warm water. Soak kitchen utensils in the mixture for 30 minutes. Then rinse under running cold water until completely free of residue. Repeat if necessary. You may want to use an old toothbrush dipped into the liquid to scrub stubborn spots. Dry items immediately after cleaning.

Mix equal parts baking soda, salt, and hot water in a bowl. Add 1/4 cup of white vinegar to the mix. Mix thoroughly. Dip metal cookware in the mixture and then wipe clean with a damp cloth. Rinse with hot water and dry thoroughly.

Combine 2 cups of white vinegar, 4 tablespoons of rubbing alcohol, and 3 drops each of essential oils like lavender or eucalyptus. Shake well before spraying on surfaces where dust mites thrive. Allow spray to air dry before vacuuming up excess moisture.

4) Get Rid Of Mold On Food Products

Fill a large glass jar halfway full of white vinegar. Place food products inside the jar and cover tightly. Store in a cool place out of direct sunlight. Check periodically and remove moldy foods. Replace those removed with new ones.

5) Keep Insects Away From Plants

Fill a bucket halfway with water and add 5 teaspoons of dish soap per gallon of water. Pour in enough white vinegar to make sure there aren’t any bubbles left over when mixed together. Let stand overnight. The next day, drain off the dirty water and refill with fresh water.

But did you know that white vinegar can also be beneficial? In fact, it offers similar properties to apple cider vinegar. Both types have antimicrobial qualities that help prevent infections. They’re great for keeping insects away from plants too!

So what do you think? Do you prefer apple cider vinegar or white vinegar?

Do you ever wonder if you should buy something before it goes out of date? If you don’t want to waste money on food that’s already gone bad, then you need to learn how to tell whether or not something has spoiled. There are many foods that spoil quickly, but there are also some that…

Do you ever wonder if leaving food in the oven longer than necessary could cause serious damage? If you don’t believe me then read this article where he leaves his oven on for three days straight. I’m sure you’ll agree that this is pretty crazy! Can you get carbon-monoxide poisoning from leaving the oven on?…

Masa harina and corn flour have confused many people around the globe. Is it the same thing or not? I am going to explain this in detail so that you can understand what masa harina is, how it works and why we use it for making tortillas. To know more let’s dig into the topic….

Are you wondering whether you can eat a bruised banana? Well, the answer is yes! If you look at bananas, you’ll notice that they are green on the outside but yellow inside. This is because the skin has been damaged during shipping. Bananas are very nutritious and contain lots of vitamins and minerals. However, if…

What causes that tipsy feeling? Alcohol is a depressant drug that affects the central nervous system. It slows down brain activity and reduces the ability to think clearly and react quickly. Alcohol affects people differently depending on how much they drink, what type of alcohol they consume, and whether or not they are used to…