There are many tasty food items in the world that you can try for breakfast and Bacon is one of them. Bacon is salt-cured meat that comes from the pig’s belly or the back. 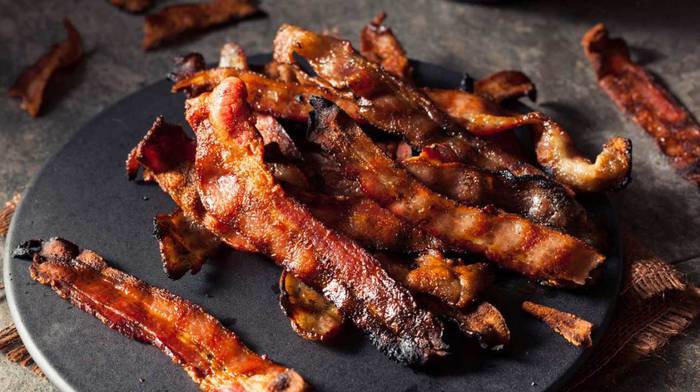 This wonderful food item is very tasty and many people all over the world consume it on a large scale. It can be served directly or you can also use it with other meals. Many recipes also make use of bacon as an ingredient like sandwiches, soups, salads. Many people do not have any idea what Bacon is but the ones that know have a very common doubt.

Today we will look at what Bacon is and how to cook it. We will also see how to cook Bacon without oil and why you don’t need oil for cooking Bacon. Read this article if you’re also searching for answers to the questions that are mentioned above.

Contents hide
1 What is a Bacon?
2 Do you need oil for cooking Bacon?
3 What is Lean Bacon?
4 How to cook bacon without oil?
5 Why is Bacon Salty?
6 Safety tips while cooking bacon
7 What can you do with the rendered oil?
7.1 Related Posts:

What is a Bacon?

The most common type of Bacon that is used mostly in the United States is the side of the pork. This is obtained by cutting the side of the pig. Bacon is very fatty and has long layers of fat. 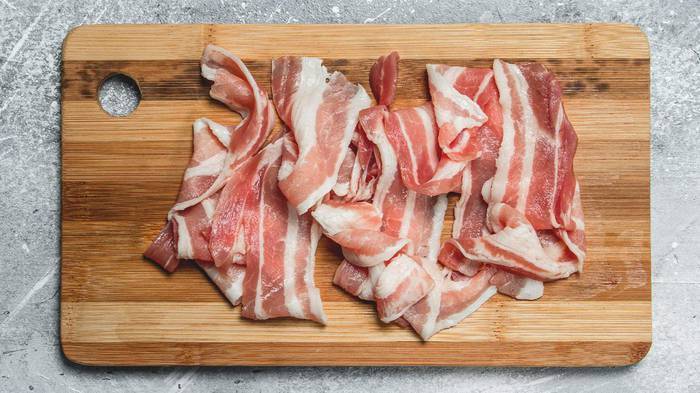 Meanwhile, in the United Kingdom, the most common type of Bacon is the Back Bacon. It comes from the middle of the back of the pig. It has a ham-like structure. Curing and smoking the meat before cooking it at home is common. Flavor comes from the fat in bacon, which is crispy and tender. Bacon must have a high fat-to-meat ratio, usually between one-half and two-thirds fat to meat.

Many of the fats are rendered when bacon is cooked and can be poured off if necessary. One should never cook Bacon at high temperatures for a long time because high heat will turn the nitrite curing agents into nitrosamine.

Do you need oil for cooking Bacon?

One should know that Bacon is capable of cooking on their own fat. When you add more oil it doesn’t make any sense and therefore one should never add oil to bacon. 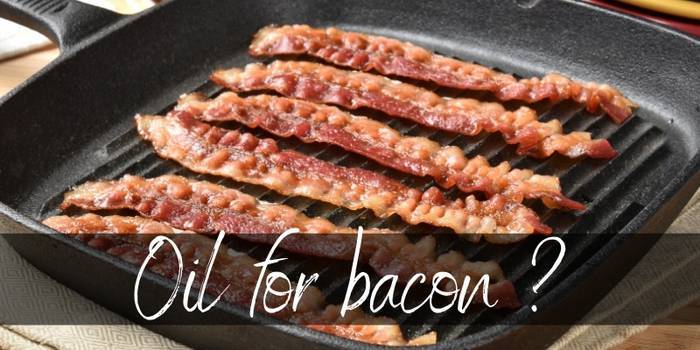 The fat that is present in the Bacon tends to melt down in the pan and fry the bacon. If you eat eggs and if you want a good bacon flavor then you can try using the melted fat to fry eggs in it. Many people prefer their bacon baked and even if you bake your bacon then also you should not use any oil because there’s no need to do so. While cooking the bacon whether you are frying or baking it you should make use of an appropriate pot because you will be left with a lot of liquid fat.

See also  Can You Eat Rhubarb Raw Yes, And Heres How

Never make use of a shallow pan or pot because, in the end, it will spill over if you are cooking a lot of bacon.

What is Lean Bacon?

There are some types of bacon that are known as lean bacon. You need to know that these bacon have less fat in them compared to other types of bacon like American bacon or British bacon which have plenty. 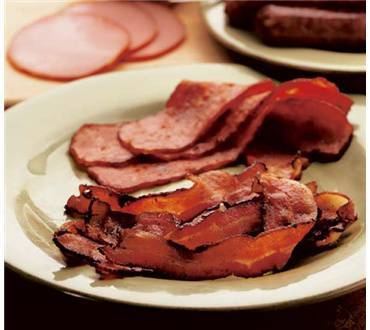 In American and British bacon there is plenty of fat which is more than you need to cook bacon so there’s no need to add any additional oil. You cannot find any piece of bacon without fat in it so no matter how little the fact is, this will be enough to cook that bacon. This simply means you won’t have to make use of oil from your kitchen.

However, there are chances that your back-on might not have enough fat to cook your bacon so don’t worry before adding oil, all that you need to keep in mind is that you should not add too much oil and your bacon should not stick. You can sprinkle few drops.

You might have bacon with less fat, bacon with no fat or fat removed, bacon with cuts from closer to the bone, and in such cases, there may or may not be enough fat that will help you cook the bacon and in such situations, you can add some additional oil and it won’t be a problem. You should use neutral oil instead of olive oil for maintaining the flavor.

How to cook bacon without oil?

There are few important things to keep in mind which you need to do before everything so that you carry out the whole task smoothly. 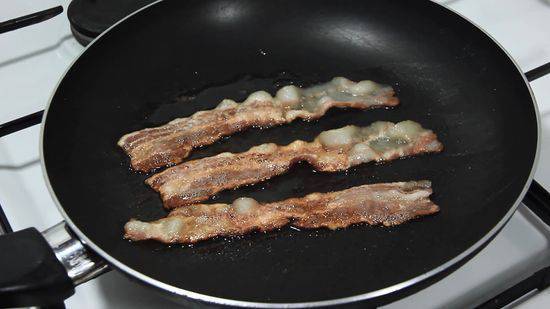 The first thing that is required to do here is to make use of a cold frying pan. You can also go with a non-stick frying pan if you prefer. Now pick up the piece of bacon and start rubbing it slowly inside the pan or pot or skillet, whatever you decided to use. The rubbing will end with leaving a small layer of fat over the pan. When you will start with the cooking process the fat that got accumulated over the pan will start melting.

This will act as grease that will prevent the bacon from getting stuck on the surface of the pan.

You need to first put bacon on the pan before putting the pan on the cooktop for heating. After you’ve put the pan on fire it will start heating up along with the bacon. After some time the fat will start to melt and this will act as grease for cooking. You should always make use of medium heat for cooking bacon for some time as this will be helpful for the day to come out and then put it on low heat so that everything gets cooked thoroughly.

Why is Bacon Salty?

The manufacturing technique utilized for bacon is the major reason for its saltiness. Bacon is brined or salt-packed dry. Moisture is drained from the meat as a result of this process.

When the moisture in the meat is removed, it provides an unfriendly environment for bacteria and fungus to thrive. Cooking time will be reduced because of the low moisture content. The bacon side dish is both delicious and salty. When the bacon is placed on the frying pan, the moisture begins to evaporate, leaving an equal quantity of salt behind. Crispy bacon has a higher salt content than fresh bacon, as you may have observed.

While cooking bacon you will have to be a little cautious because it may not take a long time to cook bacon but let me tell you that the process can be a little messy at times.

When bacon is cooked this can lead to the rendering of a lot of oil all over the pan and this can be more than your pan can take. Sometimes, the oil can be more than what it can safely handle. The situation can be sometimes difficult to handle because the grease can come out and splatter all over the place and also on the cooktop. This simply means a lot of cleaning stuff.

This can also lead to a dangerous fire hazard if not taken care of. In case you’ve got open flames near the place where you are cooking bacon then it can lead to a grease fire.

If this happens then immediately turn off the gas and just remember you should never throw water on it. Throwing water on a grease fire can only make things worse and it will spread even more. The better way to deal with it is to put a lid on it or cover it. If you’ve got a fire extinguisher at hand then use it in such situations.

See also  Does String Cheese Melt Heres What To Know

What can you do with the rendered oil?

As we studied earlier that bacon doesn’t require a lot of time to cook. The time frame depends on many factors like the thickness of the bacon and the crispiness required.

When your bacon is getting cooked it may render a lot of oil because it contains a lot of fat. This fat may be left even after the cooking is completed. You will have to discard it from the pan after cooking. When the fat is heated, it will be in liquid form but as soon as it cools down it will turn to solid form and become lard. You need to note this and never throw it in the sink because it will turn to solid-state after it cools down and will block the drainage.

You can store it in a bowl if you are thinking to use it later for other dishes but if you want to throw it away then you will have to pour it in a plastic bag after it cools down but make sure you do it before it turns into a solid-state. The purpose of this description of how to use the rendered fat was to make you aware of the amount of fat in the meat. There is a lot of fat in bacon, and you do not need to add any extra fat when cooking it.

Bacon is loved all over the world and can be easily found in most kitchens. You can use it as a food item or use it as an ingredient for some recipe.

The most common type of Bacon that is used mostly in the United States is the side of the pork. This is obtained by cutting the side of the pig. Bacon is very fatty and has long layers of fat. Meanwhile, in the United Kingdom, the most common type of Bacon is the Back Bacon. It comes from the middle of the back of the pig. Bacon contains a lot of extra fat that gets melted when you cook bacon. This fat is more than enough to cook bacon.

There is no need for oil to cook bacon. I have mentioned everything about cooking bacon. I hope this article was useful and informative.