Salmon is a type of fish that has been around for millions of years. It is an oily fish that contains omega-3 fatty acids. These fats are essential for the body because they help keep the heart healthy and also help prevent certain types of cancer and also improves bone health.

The bones in salmon can be removed or left intact. The choice depends on what you want to do with your salmon. If you plan to eat the whole thing raw, then leave them in. However, if you plan to cook it, remove the bones before cooking. This will make sure there aren’t any sharp edges when you cut into it later.

Salmon is one of the greatest types of fish available to the general population, and it seems to be boneless, which is a blessing. At least when buying a salmon fillet or looking for smoked salmon. Is salmon, on the other hand, boneless? Is it one of those barely-boned fish that is a joy to cook, or are they removed before the meat is sold? Let’s take a closer look.

Contents show
1 Are there any bones in salmon?
1.1 Salmon fillets are generally sold boneless.
2 How to Remove Salmon Pin Bones?
3 What happens if you eat the bones of a salmon?
4 Can you eat Salmon skin?
4.1 Related Posts

Are there any bones in salmon?

Yes, but not all of them. Some people think that salmon doesn’t really have bones at all. Others say that some species of salmon actually have small bones inside their bodies. In fact, these bones are so tiny that most people don’t even notice them. 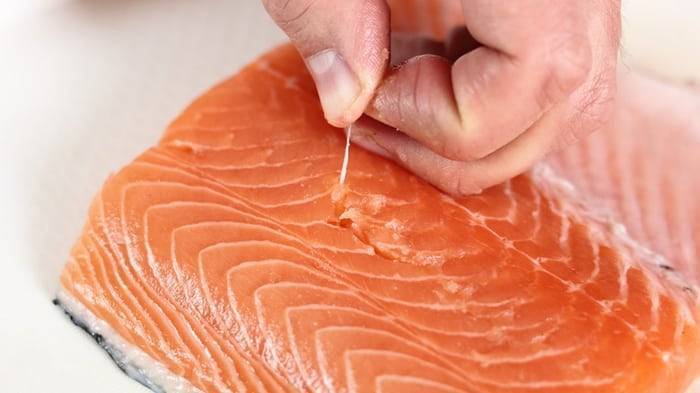 So how does this work? Well, first off, let’s talk about the difference between bone and cartilage. Bone is made up of calcium phosphate crystals. Cartilage is mostly water and protein. Salmon does, in fact, have bones, both bigger and smaller ones. The fillets and steaks are sliced and cooked in such a way that there are typically no bones visible, or the bones that are visible are large and easy to notice, allowing the client to remove them.

Small pin bones are commonly removed from salmon on the manufacturing line when the fish is sliced and sorted into different cuts. The pin bones are very thin, flexible, and unattached to the spine. Salmon steaks include the larger, thicker bones that attach to the spine. Choking on such bones is quite unlikely because they are big and easy to avoid.

If you buy fresh salmon fillets, chances are good that they won’t contain any bones. You may find some pieces of skin attached to the flesh, however. That’s normal. When you purchase frozen salmon fillets, you should expect to see more bones than fresh ones.

Frozen salmon tend to lose their moisture during freezing, making it easier to spot the bones. When purchasing canned salmon, you might get lucky and find none. If you buy salmon fillets on a regular basis, you’re probably getting boneless fish. While the fish is being sliced, the pins are removed. In the flesh, you can generally detect a shallow trench where the pin bones would originate. Tongs are used to remove them, and you should see a shallow ridge made up of tiny holes.

Those holes are the pin bones’ exit sites, as pulling them out is essentially tearing them out of the flesh. If there are any bones left in your salmon fillet, you can typically feel them by running your finger across it firmly. Any bones that protrude will poke your finger.

How to Remove Salmon Pin Bones?

The best method for removing pin bones from salmon is with tongs. It takes practice, but once you’ve got the hang of it, you’ll never want to go back to using fingers again! Here’s what you do: 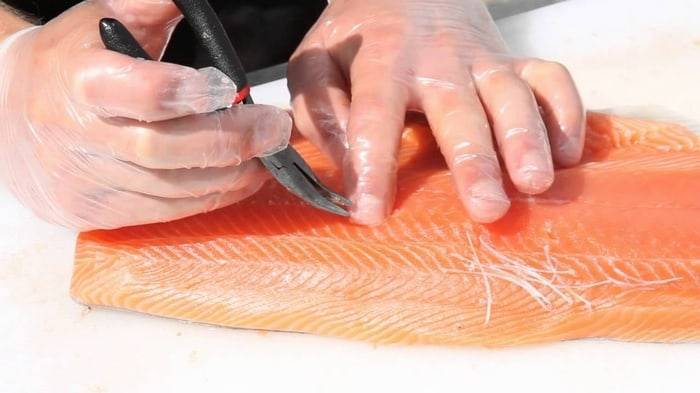 1) Hold the salmon tightly against itself. This helps keep the flesh together while you pull the pin bones out.

2) Insert the tip of each tong under the edge of the flesh closest to the backbone.

3) Pull down gently until you hear the sound of breaking bones. Repeat steps two and three until all the bones are pulled out.

4) Rinse the salmon thoroughly to ensure that nothing remains stuck to its surface.

You’ll need tongs or pliers if your fish has any bones that you’ve identified. Something far more powerful than a tweezer. Place them skin-side down on the fillet and run your finger through the flesh until you find each bone.

Gently press down on the flesh towards the bone; it should protrude slightly. With the pliers or tongs, grasp the end of the pin bone, and maintain the flesh flat with the other hand. In the direction of the bone, yank firmly. It will resist at first, but because it isn’t attached to anything, it will eventually emerge.

What happens if you eat the bones of a salmon?

It depends on how much you consume. Some people have no problem eating small amounts of bones, whereas others experience gastrointestinal distress after consuming even one large piece. For this reason, many restaurants offer "boneless" options.

However, most commercial producers don’t bother removing the bones before packaging. So, unless you know exactly which restaurant prepared your meal, you could be ingesting bones without knowing it. If you happen to eat salmon bones and don’t realize it, you’ll probably be OK. The pin bones are thin, delicate, and flexible, and your stomach acid will ultimately digest them. If nothing is caught in your throat or hurting, it’s most likely already in your stomach and is digested.

A little piece of bread can be used to assist a pin bone that has been trapped in the stomach. However, if you are in any agony or discomfort, visit a doctor, who will assist you in removing the bone. Because pin bones are soft, they shouldn’t be an issue.

Can you eat Salmon skin?

Yes, although some prefer their salmon skinless. The skin contains collagen, so it adds flavor and texture. You may also notice that when cooked properly, the skin becomes translucent. That means that the fat underneath the skin melts away, leaving only the meat behind. 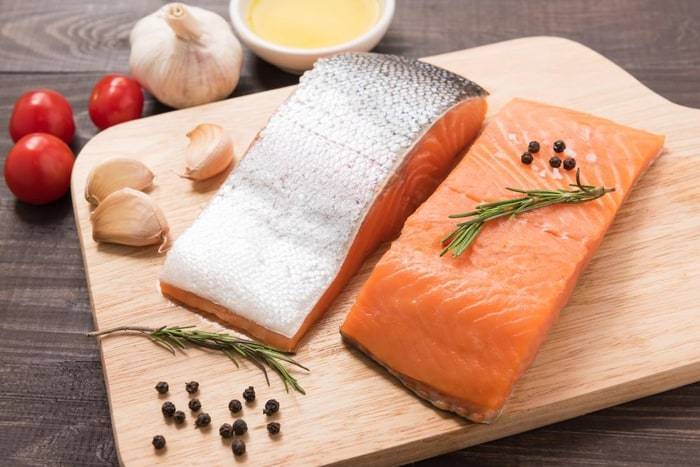 If you like the taste of salmon skin, then you might enjoy cooking it yourself. Simply remove the skin from the fillets, place it between paper towels, and microwave it for about 30 seconds per side. Salmon skin is palatable if the scales are removed and cooked correctly. In fact, the skin of these fish is so thin that when cooked, it can become quite crispy, which may come as a pleasant surprise to some.

You may leave the salmon skin on and remove it later if you don’t intend to eat it. It’s a lot easier to remove the skin this way than it is to chop it off with a knife. There’s a lot less waste, and you get properly cooked salmon to boot! Make sure the scales are removed once again. You may get rid of them by cutting across the scales against the grain using a knife. Before disconnecting your sink, make sure it’s connected in and the scales are removed. No one wants a blocked sink that smells like fish.

Salmon is delicious, nutritious, healthy, versatile, inexpensive, easy-to-cook, and a good source of protein which is available year-round that is good for bone health.

This makes it perfect for anyone looking to add more seafood into his diet. Whether you choose wild Alaskan sockeye, Atlantic farmed rainbow trout or farm-raised pink salmon, there’s something out there for everyone.

I hope this article helped you with all the things you were looking for and also with your food curiosities.

Apples are red because they contain an enzyme called polyphenol oxidase. It’s responsible for turning the apple into its bright red color. But did you know that there are other reasons apples are red? They’re also high in vitamin C, fiber, potassium, and antioxidants. So if you want to eat an apple, you should definitely…

Have you ever tried to open a coconut only to find that it’s impossible? Well, if you have then you’ll know exactly how frustrating it can be! Coconut water is a refreshing drink that has become very popular recently. However, opening coconuts can be tricky. If you don’t know how to crack open a coconut,…

Although parsley belongs to the carrot family, it is not related to carrots. It’s a herb that’s utilized in a variety of recipes, particularly in Italian cuisine. Because it is commonly used in Italian cuisine, it is frequently referred to as "Italian parsley." Because it resembles a root vegetable, it is sometimes known as "parsley…

When you go out to eat at a restaurant, you expect them to cook your food fresh. But what happens when they forget to reheat your meal? How do you get around this problem?When you order food from a restaurant, you usually want it hot and ready to eat. But sometimes, things don’t turn out…