When it comes to breakfast, there are two types of omelettes that people love – the French and the American. Both are delicious and both are equally healthy. However, there are few differences that you will see ahead. 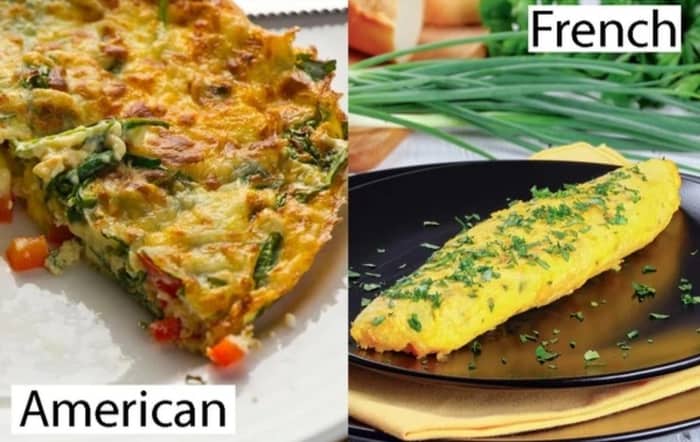 The technique of French omelettes focuses more on skill, speed, and the perfect temperature than it does on taste. Most people think of an omelette as a fluffy egg mass, but American omelettes are much simpler to make and result in a similar mass.

One of the key points is filling and topping. Because of the French omelette’s need to perfectly cook the eggs as a creamy mix with a thin outer layer, any filling you add will ruin it. American omelettes usually have some sort of topping in their folds. They sometimes have the same feeling as an Italian frittata.

Eggs, frittatas, and tortillas patatas are mainstays of a good breakfast, as well as the French and American omelettes.

The actual technique of an omelette is different between France and the US. Eggs are already well beaten in a bowl when they start out. Butter is being melted.

A French omelette requires just salt and a bit of pepper to be put into the melted butter in the pan. On a medium-low flame, the omelette is constantly shaken, stirred, and even whisked until it resembles an emulsion. The hot butter cooks the egg, even though it does not form fully.

The result may seem raw to the untrained eye, but it is a very creamy mixture. The pan is usually taken off the heat to prevent a layer from coagulating until the final moment, and there is a lot of pan and fork movement.

If you look at the omelettes differently, you can tell them apart. Because of the way it’s presented, the American will always be golden brown. The French is a pale yellow because it can’t be left in the pan long enough to start developing a crust. The creamy interior requires the outer skin to be in place. If it were to be cooked longer, the inside wool would cook more and make it less creamy. Eggs are not easy.

An omelette’s texture will tell you what you are eating. Is it smooth and creamy as a custard? It’s an omelette from France. Since it cannot cook evenly and remain creamy, a French will have no filling. If you want to cook it right, don’t add anything else but a topping or side dish.

An American omelette doesn’t have a filling because once it’s done cooking various toppings are added on one side, and then it’s folded so the toppings are in the center. You can find cheese, bacon, mushrooms, peppers, and other things in some places. Most would consider it an American omelette even though it’s a cross between a frittata and an omelette.

Butter is a key ingredient in both

Both use butter for its ability to melt quickly without burning. In America, we like our food fast, which means that most recipes call for melting butter over high heat. This allows us to get started faster. But this also makes the process harder to control. When making a traditional French omelette, the butter must be heated slowly, allowing time for the eggs to set up before adding ingredients.

If you did not use butter in a French omelette, you would get scrambled eggs. A different result will be created by cooking oil and butter together. Oil has a lower smoke point than butter, meaning that if you used too much oil, your omelet could burn.

The butter is whisked into the eggs in an American omelette but not as much. To cook the omelette, half of the butter is left on the outside. The butter will still have a rich flavor because the eggs absorb it anyway.

PS: There is another difference between these two dishes. They are made using different techniques. One uses a skillet while the other uses a nonstick pan. Both methods work well, but they do require slightly different skills. For example, when frying something in a skillet, you need to keep moving the item around to avoid sticking.

Why is it called French omelette ?

The omelette is called French because of its origin in France. It is unclear when and how the first French omelette was made, but it is said to have been made in France.

What does this mean?

The names are irrelevant and don’t really point to the true origins.

The American omelette may or may not be the same as the French one. Most people don’t know it’s American style to cook their omelette this way, but it’s a very basic form of cooking eggs.

The way to differentiate the two styles was by naming them French and American.

The technique for making a french omelette

It is difficult to master the proper technique for making a French omelette. Eggs, butter, salt, and a pan are all needed.

There are some steps to create a French omelet.

You might make a few mistakes the first time. Everything needs to be fixed before the texture and shape can be fixed. It is helpful to explore the details of each step of the French omelet technique.

How to prevent the omelette from breaking?

When preparing the omelets, there are many things that can go wrong. You must learn what causes problems and fix those issues. Here are three common errors that cause breakage.

Buttermilk helps prevent the formation of gluten which gives strength to breads and pastries. However, too little butter can also lead to weak structures. In fact, most recipes call for 1/4 cup of unsalted butter per 2 cups of liquid.

Some people like to over-crisp the outside of the omelet while others prefer softer edges. Either method works well. But overcooking destroys the delicate balance between water and fat inside the egg white. As the moisture evaporates, the air pressure builds up causing the yolk to burst outwards.

Omelettes are easy to make!

Making your own homemade omelettes is easy. All you need is a good recipe and a bit of practice. There are lots of different ways to prepare omelettes. Some people use only milk instead of cream. Others mix cheese into the batter. Still other people put bacon pieces into the center of the omelette.

No, they are not raw, they are just cooked differently so they look creamy when served. The difference lies in how long the eggs have been allowed to sit after being beaten. They are usually left sitting for several minutes before serving.

Why do we eat an omelette?

Eating an omelette has become popular because it is quick and simple to make. People love eating breakfast foods. It’s a quick and healthy option that anybody would love.

Should you add milk to an omelette ?

If you like eating fluffy, creamy and soft omelette then you can add butter to it but do not go for milk.

How many eggs for an omelette ?

The number of eggs depends upon the size of the dish or skillet used. Generally speaking, two large eggs should fill half of a 10 inch frying pan. For smaller pans, double this amount.

Generally 2 eggs are enough for one person. You may also add your favourite seasonings to it such as herbs, spices etc.

What kind of oil should you use for cooking an omelette?

Use any type of vegetable oil. Avoid using animal fats such as lard or shortening. These oils tend to solidify at high temperatures making them difficult to stir with a spatula. Use olive oil if possible. Olive oil does not solidify even at very low temperatures.

Can you freeze an omelette?

Yes, you can freeze them. Just place them on a baking sheet lined with parchment paper and cover them with aluminum foil. Freeze until solidified and keep in freezer bags. Thaw overnight at room temperature.

So now you know all about french omelet vs american omelets. Now it’s up to you what you want to serve. If you want something light and fluffy then try our delicious chicken salad sandwich. Or maybe some crispy fried potatoes with gravy. Whatever suits your taste buds best. So enjoy these tasty dishes today. Have fun learning new things everyday.

Coconut oil has been touted as a miracle cure for almost every ailment under the sun. Is it really that effective? Coconut Oil is a natural product that comes from the fruit of the coconut palm tree. It contains medium chain triglycerides MCT which are easily absorbed into the body. MCT’s are used by the…

Do you want to learn how to cook beef liver? If yes, then this article is for you! In this article I explain you how to boil beef liver. This is a very simple recipe but if you follow my instructions, you’ll get perfect results every time. I hope you enjoy this article and find…

Have you ever tried using an Instant Pot before? If not, then you should definitely give it a try. This kitchen appliance has become very popular lately because it helps save time and energy.Instant Pot is a brand name for a series of electric pressure cookers designed by Jovial Inc. The company was founded in…

Method 1- Direct Heat Direct heat is the simplest way to cook food. It uses direct contact between the heating element and the food being cooked. This method is used mostly for baking, roasting, grilling, sautéing, and stir-frying. Other FAQs about Instant Pots which you may be interested in. Instant Pot is a multi-functional electric…

Bell peppers are a staple in our kitchen. They come in various colors and sizes, and they add flavor to dishes. The question is, how long does a bell pepper plant last?Bell peppers are grown from seeds. Seeds are tiny pieces of tissue that contain genetic material. When planted into soil, these seeds develop roots…