Grain is a general term used to describe a plant seed that has been harvested and processed into flour. Grains are commonly found in bread, pasta, crackers, cereals, and other foods.

They are an excellent source of carbohydrates and protein. They also contain fiber, vitamins, minerals, and antioxidants. There are many different types of grains including wheat, rice, oats, corn, barley, rye, millet, quinoa, buckwheat, amaranth, sorghum, teff, and others.

This article is for you if you love discussing definitions with your pals. We believe this is one of the most intriguing and difficult-to-answer issues out there.

Are grains considered vegetables? If so, why do you think that is? Why not, if not? Both sides have fair arguments for and against them. Today, we’re going to tackle this tough categorization, and perhaps, we’ll be able to provide a clear solution. After all, you need both vegetables and grains on your plate from a nutritional standpoint. But does it imply you have to buy two of them if they’re the same thing? Let’s see what happens.

The first argument for considering grains as vegetables come from their similarity to plants. In fact, some people even consider fruits to be vegetables because they grow off of trees or vines. 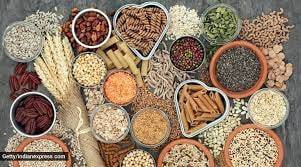 However, when talking about food items like cereal flakes, pasta, and oatmeal, these aren’t technically fruit; rather, they’re grain products. So how can something grew by nature be called a vegetable?

From a botanical standpoint, grains can be classified as a vegetable. This is because the pericarp, which contains the edible meat, is bonded to the outer covering in the construction of a grain. When you combine it with the culinary and nutritional definition of a vegetable, which is defined as the utilization of diverse portions of a plant for food, typically savory, you have a very broad but sensible classification.

So, on the perfect dish, you could just fill half of it with corn and have both grains and vegetables? Yes, in theory. Grains, on the other hand, are frequently starchy meals in practice. Vegetables are low in starch and high in fiber and minerals, compared to grains. So you’ll require both. Grains vs. vegetables: The debate continues!

On the flip side, however, there are those who argue that grains should remain separate from vegetables. Some say that since they don’t produce roots, stems, leaves, flowers, seeds, or tubers, then they shouldn’t be included in the category. In addition, some claim that grains were originally cultivated for human consumption before being domesticated for animal feed.

This is a question that may be answered from two perspectives. Yes, from a botanical standpoint, grains and vegetables are the same. They are vastly different from a culinary or nutritional standpoint. So, what exactly does this imply? Whether you follow the botanical or culinary definition of grains is entirely up to you. Let’s start with the botanicals, which are actually veggies. Let’s talk about grains and vegetables separately for a while so we can grasp their definitions and distinctions.

What is a grain?

A grain is an entire seed inside its shell. It has three parts: endosperm, germ, and bran. A kernel is simply the whole package. You might know them better as wheat berries, oats, barley, rice, etc.

Grains are often used as ingredients in cooking. Grains are the seeds of different grasses. Wheat, rice, buckwheat, and millet are all grasses or plants derived from grasses. This is from a botanical standpoint, and grains are classified as caryopses under that categorization.

A caryopsis is a basic, dry fruit in which the ‘fleshy’ component is united with the thin outer covering, according to the definition. It’s not a heavy coating; in fact, it’s rather thin, yet it’s still present. So, what does this imply? In botanical terminology, grains are basically a sort of fruit. A very basic fruit with a significantly different structure than an apple or an orange in terms of edible flesh.

Grains are obviously starchy from this perspective. It’s said to be incredibly filling, whether it’s wheat, millet, quinoa (debatable), buckwheat, maize, or rice.

As we digest grains, the starch in them is converted to glucose in our bodies. The glucose is then either utilized as energy (calories) or used to grow fat cells if it isn’t used right away. It’s why, when we consume starchy meals, we acquire more weight than when we eat non-starchy ones. We can’t, however, eliminate starch; we require it in little doses. Only grains are deemed starchy out of all the foods available; veggies are not.

What is a vegetable?

A vegetable is defined by Merriam Webster Dictionary as "a plant whose stem, root, leaf, flower, or fruit contains no hard substance." That means that any part of a plant that doesn’t contain a hard substance is considered a vegetable. 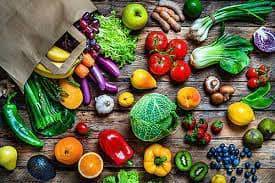 For example, tomatoes are usually thought of as a veggie even though they have some fiber and minerals. Onions are another common food item that many think of as a vegetable despite being comprised mainly of carbohydrates.

The botanical definition of a vegetable is ambiguous. It’s commonly thought of as the edible section of a plant, but not the seed-bearing component (with a few exceptions). That is, the meat and exterior skin of bell pepper, but not the seeds. Despite the presence of seeds, a tomato is eaten whole, seeds and all, as are zucchini, carrots, and potatoes. The issue is that vegetables lack a botanical definition, thus they can refer to a wide range of genuine foods. Technically, the meat within a dry grain, no matter how tiny, is a vegetable.

Vegetables have far less carbohydrate than grains and give a distinct set of nutrients. Veggies are high in fiber, as well as micronutrients such as minerals and vitamins. Those same nutrients may be found on the exterior of grains, such as wheat or rice, where the husks are frequently removed.

Are wheat, rice, and corn vegetables ?

Wheat, rice, and corn are three major staples for humans around the world. They’ve been cultivated since ancient times and remain popular today. These crops are often called cereals due to their similarity to grasses. However, these plants do differ quite substantially from grasses. For one thing, they don’t produce flowers. Instead, they form kernels, which are actually fruits.

It’s important to note that while cereal grains are sometimes classified as vegetables, they’re not always so. Some varieties of oats, barley, rye, spelled, Khorasan wheat, triticale, quinoa, millet, buckwheat, amaranth, teff, sorghum, and wild rice are generally regarded as vegetables rather than grains. In fact, some experts argue that those who classify them as grains are doing so incorrectly.

Yes, they are vegetables from a botanical standpoint. Their flesh is very thin and bonded to the outer skin (exocarp), yet it’s there and tasty. This is especially evident when looking at fresh, uncooked maize. All of this being stated, it is entirely up to you whether or not you want to consider this. You’ll need to separate the two from a nutritional standpoint. If your doctor advises you to eat more vegetables, he won’t be pleased if you return after eating twice as many grains.

Grains are an essential part of our diet. While we should consume plenty of veggies, too much consumption of grains will cause problems with digestion. We shouldn’t go overboard either way.

Fruits spoil very easily. How do you tell whether or not they are rotten?Fruits are perishable foods that are harvested at their peak ripeness. They are often sold fresh from the farm or picked off trees. The quality of fruits depends on several factors such as climate, soil, and harvest time.There are five main signs…

Do you ever wonder how long vodka lasts? Vodka is a clear spirit distilled from fermented grain mash. It has a distinctive flavor and aroma due to the distillation process. 1 There are different types of vodkas depending on where they come from. Some are flavored while others are unflavored. There are also different types…

Table salt has been around since ancient times but did you know it’s also been used to melt ice? Table salt was first discovered in China during the Han Dynasty 206 BC – 220 AD. It was originally used to preserve food and prevent spoilage. z_xn0Z2Vqf4 I found this article on the Internet and thought…

Do you ever wonder if those dents in the side of canned food are really dangerous? There’s no doubt that canned foods are convenient and cost effective but there are also risks associated with eating them. 1 I’m going to tell you whether or not you should worry about the dents in your canned food….

Pizza dough is a type of bread dough that has been stretched out into a thin flat sheet. It is usually cooked in an oven at high temperatures. Pizza dough is used to create pizzas, calzones, and other types of baked goods. There are many different kinds of pizza dough. Some are made with yeast…