In this brief guide, we will answer the question, how many gallons of milk can a cow produce?’. The factors that we discuss are either biological or environmental. Then we discuss ways to optimize milk production.

How many gallons of milk can a cow produce?

Cow breeding helps to increase the natural production of milk. The Holstein-Friesian, one of the most common cows in the UK and US, has been bred to produce higher milk quantities.

How do cows produce milk? 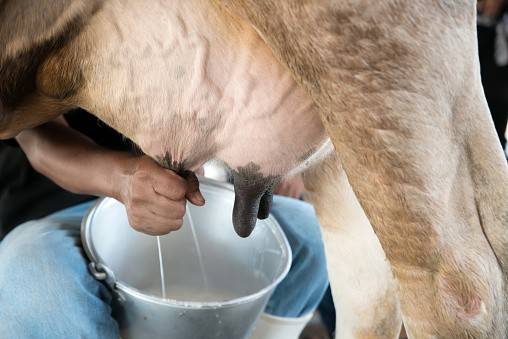 Milk is produced in the mammary gland of cows after a calf is born. The glands commonly known as the udder, secrete milk by a stimulus. The main milk components are proteins, lipids, and lactose. They have to transport via the bloodstream to the secretory cells. The synthesis of milk occurs inside the cell component called the Endoplasmic Reticulum.

A stimulus through a suckling calf or milking equipment causes the release of a hormone. In turn, the alveoli start the milk secretion.

The alveoli are branches, that let the milk pass through the duct system.

Milk Production in the US

The most common breeds include Ayrshire, Brown Swiss, Guernsey, Holstein, Jersey, and Milking Shorthorn. All of these cow breeds contribute to milk production.

The female dairy animals produce milk after they have birthed their calves. Ten months after giving birth, the cow will have dried off. After 12-14 months pass, the cows give birth again through the artificial insemination process.

An average cow produces 7.5 gallons of milk per day. Naturally, for her calf, a cow will produce a gallon instead. The dairy cows are milked, not once but two to three times a day.

To increase milk production in cows, they are fed synthetic hormones. The Recombinant Bovine Somatotropin is the man-made replica of the natural milk-producing hormone.

According to the National Agricultural Service Statistics Services, in 2006, the milk production per cow per year was 2320 gallons. 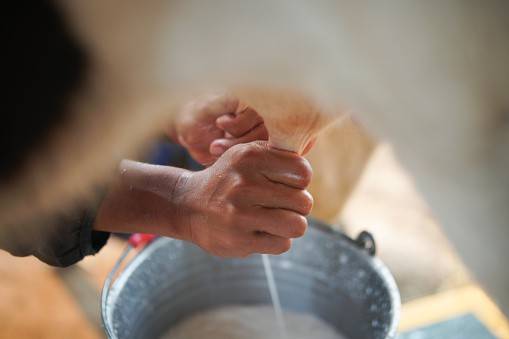 The climate and humidity affect milk production in cows. High heat will substantially reduce milk quantities in cows. Cows that are well-fed and live in a comfortable environment will produce more milk. 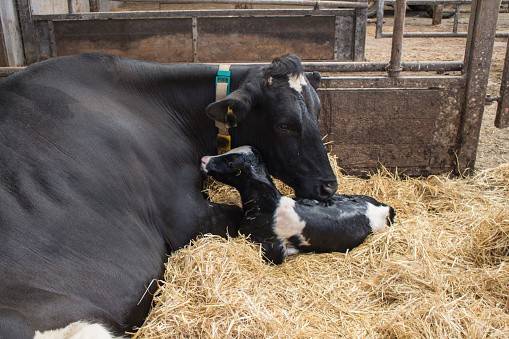 How to optimize milk production in cows?

Cow husbandry and management have a tremendous impact on milk production. There are steps that you can take to obtain the maximum amounts of milk from a cow.

A family cow will produce lesser milk of about 2-3 gallons per day. The factors that impact our diet and the environment.

To increase the yield of milk produced by a cow, feed her high-quality pasture. The milking time should be regulated and fixed. Variable times induce stress.

The weather conditions should be moderate with protection from heat and cold. Besides weather, the cow must have an adequate supply of water and food. The cow should have easy access to water with no physical hindrance.

Cow health is apparent by its physical appearances, such as body mass index and coat, which is also significant in milk production. 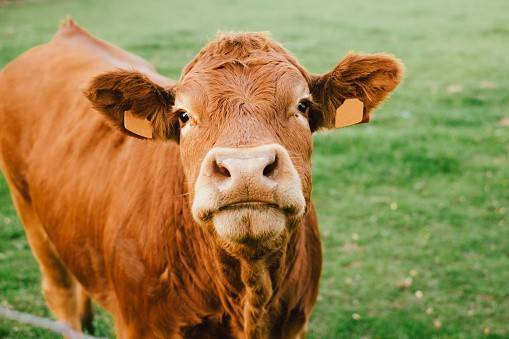 The lactation peaks at 6 weeks after birth and then continue for 12 months. The milking has to be done regularly. A consistent schedule and time interval are both essential. Otherwise, the cow’s biological clock is affected and even shuts itself off in some cases. If a cow is not milk in a while, it will stop producing milk. 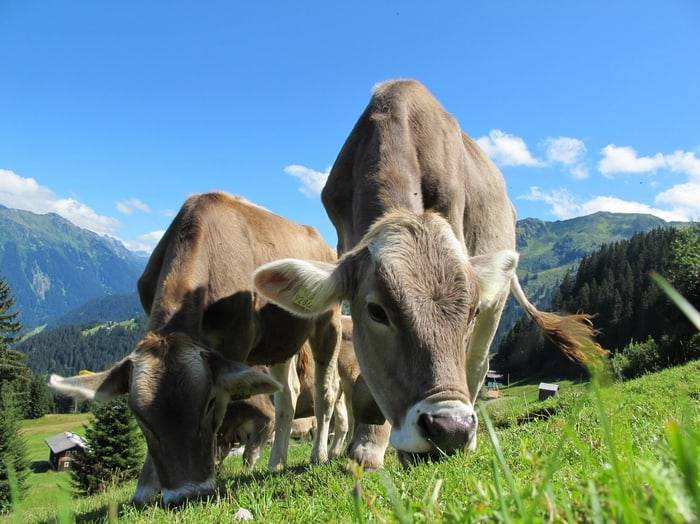 The Holstein dairy cows, on average, produce the highest quantity of milk. The renowned Holstein is responsible for 90 % of milk production in America. The Holstein produces 9 gallons of milk every day.

Jerseys are also a common dairy cow in the US, even though they originate from the Uk. Jersy Cows produce anywhere from 2 to 6 gallons per day.

The beautiful Aryshires produce 5 Gallons of milk per day. Aryshire originated from the UK and is known for its distinct orange-red marking. In a year, they usually produce 200 gallons.

Dexter matures early and has a long life. The registered cow breed produces 1.5-2.5 gallons of milk per day.

Do you want to know how much milk a cow produces?
There are 5 breeds of cows that produce different amounts of milk.
These include Holstein, Jersey, Brown Swiss, Guernsey, and Ayrshire.
I hope you enjoyed my article!
If you did then please give me a thumbs up and subscribe!

How do cows produce milk?

Cows produce milk because they have mammary glands. These glands are located under the udder. Milk comes from these glands. Cows produce milk during lactation. Lactation is the period of time when a mother gives birth to her calf. After giving birth, she goes into a state called postpartum. During this period, she produces colostrum. Colostrum is a type of breast milk that contains antibodies and other nutrients needed by the newborn calf. It helps the calf get started on solid food. This milk is very rich in protein and fat. It is important for the calf to receive colostrum immediately after birth. If not, the calf could die. Cows usually give birth every year. A cow normally gives birth to about 1 calf per year. Each calf weighs approximately 300 pounds. Cows are herbivores. Herbivores eat plants. Plants provide energy for animals. Animals convert the plant material into energy. Cows are ruminants. Ruminants chew cud. Chewing cud helps the animal digest the food. Cattle are monogamous. Monogamy means having only one mate. Male cattle have two penises. Female cattle have two vaginas. Both male and female cattle have nipples. Nipples help the baby suckle. Baby calves nurse for several weeks. Calves start eating solid food around 4 months old. At 6 months old, calves begin producing milk.

How to optimize milk production in cows?

Learn More:  Can you eat expired food if it hasn’t been opened?

How many gallons of milk can a cow produce?

A cow can produce anywhere from 0.5 to 5 gallons of milk per day depending on her diet and environment.

Cows produce milk because they have mammary glands. These glands secrete milk into the udder. This milk contains nutrients and antibodies needed by the calf. The cow’s diet affects how much milk she produces. A cow needs to eat grasses and other plants to produce milk. She can only produce milk if her stomach is full. Her body uses energy from the food she eats to produce milk. 2. How does a cow know when it is time to give birth? Answer:  During pregnancy, a cow’s uterus enlarges and becomes softer. As the baby grows, the cow’s abdomen swells and pushes against the uterus. This causes the cow to feel pain. The cow usually gives birth during daylight hours.

Milk Production in the US

In the United States, dairy farmers typically raise dairy cattle on pasture. Cattle are fed hay and grain. Hay is used to feed the animals while grain is used to fatten them up. Dairy cows are raised to produce milk. They are not bred for meat. 3. Why do cows have four teats? Answer:  Cows have four teats because they have two sets of nipples. One set of nipples is located on each side of the udder. Milk flows from these nipples.

Which breed of cow produces the best milk?

Holstein cows are the largest dairy breeds in the world. They are known for producing huge amounts of milk. A Holstein cow can produce up to 10 gallon of milk per day. This is about twice the amount of milk produced by other breeds.

Which dairy breed produces the highest amount of butterfat?

A Holstein Cow has the highest milk yield. She can produce up to 10 gallons of milk per day. Why does a cow give birth to twins?

How many gallon of milk does a cow produce?

What breed of cow has the highest milk yield?

A cow produces approximately 2.2 gallons of milk per day.

How many gallons of milk does a cow produce daily?

Which breed of cattle are the largest dairy breed and produce about 9 gallons of milk a day?

Which breed of dairy cow has the highest production of milk per day?

In conclusion, you can rest assured that your kitchen will be stocked with the best milk of the highest quality of cow you can find. As long as you know what to look for.

You’ve probably heard that washing dishes is bad for your health. But did you know that using dishwashing liquid or soap can also damage your skin?Dishwashing liquid contains chemicals that can cause irritation and dry out your skin. And soap can strip away natural oils from your hands, leaving them feeling rough and flaky.Soap and…

Have you ever wondered why parmesan cheese doesn’t melt? Well, it’s because it’s made out of Parmesan rinds! Parmesan cheese is a type of hard, aged cheese made from cow’s milk. It has a strong flavor and aroma and is used primarily as a grating cheese. In this blog post, I’m going to explain you…

Have you ever wondered what would happen if you drank expired milk? Well, it turns out that drinking expired milk can cause serious health problems. In fact, some experts say that it can even kill you. Expired milk has gone bad because of bacteria or mold growth. This means that the milk has lost its…

Freshly baked bread is delicious, but it does take some time to prepare. How long should you leave your freshly baked bread out before serving?Fresh bread has a shelf life of only 2 days after baking. If you want to enjoy its full flavor, you’ll need to consume it within two days.Bread is a great…

Papa Murphy’s Pizza has been around since the 1950’s. Their pizzas are known for their thin crust and crispy toppings. I recently went to Papa Murphy’s to try out their new frozen pizza. I was surprised at how delicious it tasted! This article explains you how to freeze a Papa Murphy’s pizza. What is the…