Potatoes are a basic staple in diets around the world, especially here in America. They can be found in a variety of amazing dishes. Likewise, potatoes are found in recipes, but many times they are called for by size. How do you know what 2 medium potatoes are? Or a small potato? And how do you know what to use so that you don’t mess up the recipe? How much does a potato weigh? How much a potato weigh might not have as precise of an answer as you might think. It depends on the kind of potato, the potato’s size, whether the potato has already been cooked, and various factors that can play a part in how much a potato weighs.

How many grams are in a potato?

Potato is a staple food in many areas and a common food worldwide. It is a necessary part of the daily diet and an essential ingredient of many dishes. It is part of countless recipes and added in specific amounts like any other ingredient. It is important to know the weight of potatoes because if a recipe calls for a medium-sized potato and you are not having that, then how much of the large potato will you add would be determined by the weight.

To determine the weight of potatoes, any of the following three ways can be helpful:

To determine the size of potatoes based on their size, we can classify them as small, medium, and large. The weight of each in a 10-pound sack according to sizes are: 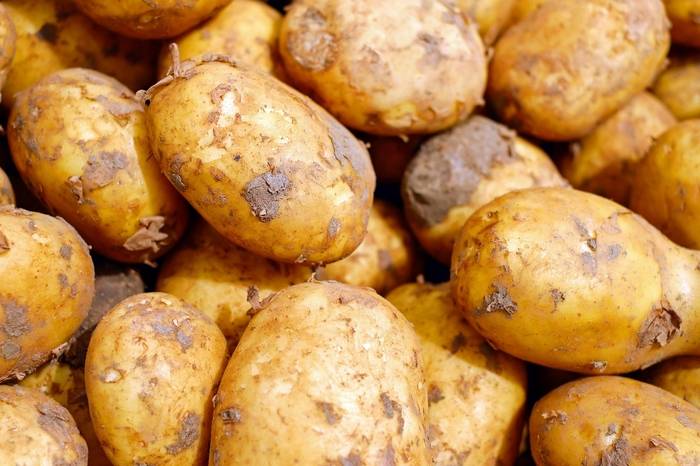 You can estimate the size of the potato by holding it in your hand and then determine the weight according to the size. For having a rough idea, we can say that a large potato is nearly the size of an avocado and will fit in the palm of your hands without curling your fingers around it. A medium-sized potato will fit 3/4th of your hands, and if you measure from the wrist end of your palm, you will get free space near your fingers. A small-sized potato will only fit your palm and would not touch the fingers of your hand.

You can also calculate the size of the potato in pounds. To determine the size of potatoes for a 10-pound sack, the estimated weight can be represented in pounds. Such as,

For russet potatoes, the number of potatoes concerning weight in pounds and grams comes out to be:

You can easily estimate the size of the potato with any of the mentioned methods, but sometimes the recipe calls to add a medium-sized potato, but you only have two large potatoes. What you can do is estimate the weight by holding the potatoes in your hands. Then cut a half or a little more than that of the potato. It will make your cooking more manageable, and many recipes use potato size as a reference so that it would not be that much of a trouble.

Learn More:  Can you eat an unripe avocado? (5 Tips) 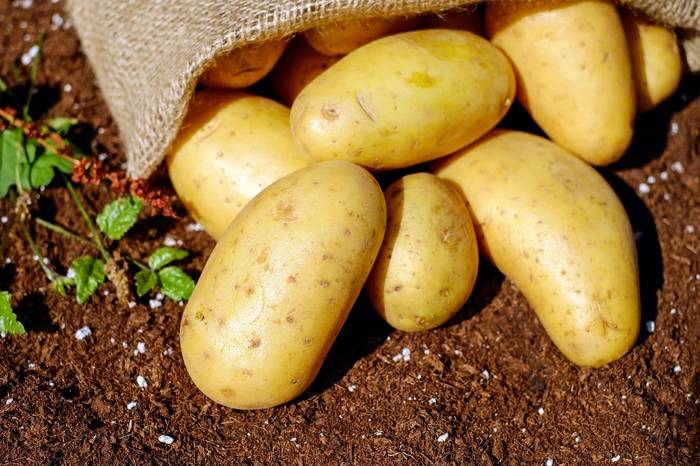 In American recipes, they write ingredients in cups, making it hard to measure the number of ingredients you want to add. And the thing about the potato is, that it easily fits in the cup. So you will never understand how many potatoes are in one cup. One way to measure this is by calculating the grams in a cup.

For instance, in one cup if there are 225g of a potato which is equal to 7.9 oz, that means the potato size would be a little smaller than a large potato. Similarly, in two cups, the amount in grams increases to 450g which is 15.9 oz, which means three medium potatoes or one large and one medium potato. With the increasing cup size, the amount also increases; in four cups, the weight will be 900g and 31.7 oz. It is equal to 3 large-sized potatoes. 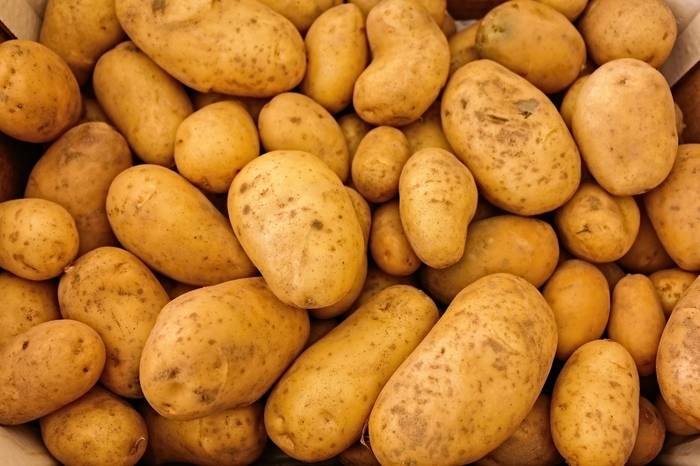 According to USDA, a single serving of potatoes means one medium-sized potato. Potatoes are a starch-rich diet, and when on a diet, many people avoid the intake of a lot of carbohydrates. You can calculate your starch intake by calculating the serving size, and a medium potato has 15g of carbohydrates in it.

Potatoes weigh between 1/2 and 2 lbs each.

Ounces are used to measure weight. One ounce equals 28.35 grams.

Learn More:  Why Do Onions Have Layers Common Onion Questions

Potatoes are versatile vegetables that can be used in many different dishes. However, if you want to know how much potato weight you have, you need to take into account the volume of the potato itself, along with the density of the potato. The following table shows how to calculate the weight of potatoes using these two factors. Volume (in cm3) = Diameter x Thickness Density (g/cm3) = 1kg / Volume Weight (in grams) = Density * Volume

How many grams in a potato?

Potatoes are a staple food in our diet. Potatoes are very versatile and can be used in different ways. It is important to know how many grams in a potato because potatoes are not only delicious but also healthy. A medium sized potato contains about 100g of carbohydrates, 5g of protein and 1.5g of fat.

Other FAQs about Potatoes which you may be interested in.

Potato chips are a favorite snack among many people. It is very easy to make potato chips at home. However, if you want to make delicious homemade potato chips, you need to know how to make them. Here are some tips on making potato chips at home. 1. Make sure that the potatoes are cooked properly. This is the most important step in making potato chips. If you cook the potatoes too long, they will become mushy. If you cook them too short, they won’t get crispy. 2. Use a mandolin slicer to cut the potatoes into thin slices. A good way to slice the potatoes thinly is to put them on a cutting board and hold the blade firmly against the surface of the board. Then move the knife back and forth across the surface of the board until the desired thickness is achieved.

Potatoes are available in different sizes. The most common sizes are medium (about 1 inch), small (about 3/4 inch) and baby (1/2 inch). Potatoes are usually sold in bags of 20 pounds. However, if you buy potatoes in bulk, you can get them in larger quantities.

How much is 2 medium potatoes?

Potatoes are a staple food in every household. Potatoes are used in almost everything from soups to desserts. In order to know how many pounds are two medium potatoes, we need to calculate the weight of each potato. To measure the weight of potatoes, we need to take into account the volume of the potato. For this purpose, we need to divide the length (in inches) by the width (in inches). This gives us the surface area of the potato. We multiply the surface area by 0.5 to get the volume of the potato (0.5 x length x width = 0.5 x length x height). Now, we multiply the volume by 1.2 to convert the volume into pounds. So, the total weight of two medium potatoes is 4.8 lbs.

Learn More:  How Much Does Refrigerator Weigh

How much does a 3 inch potato weigh?

A #2 potato is a medium sized potato. It is used for baking, mashing, french fries, and other dishes. A #2 potato is not necessarily a sweet potato. Sweet potatoes are larger than regular potatoes and have a sweeter taste.

What is an A size potato?

Potatoes are among the most popular vegetables around the world. Potatoes are used in many dishes such as french fries, mashed potatoes, chips, baked potatoes, and even pizza toppings. A typical potato weighs about 1 ounce (28 grams) per medium sized potato. However, if you buy a larger potato, it could weigh anywhere from 2 ounces (57 grams) to 4 ounces (113 grams).

How many cups is 2 lbs of potatoes?

Potatoes are a staple vegetable in many countries around the world. Potatoes are a great source of carbohydrates, fiber, vitamin C, potassium, and other nutrients. In addition, they are low in calories and fat. A medium potato weighs about 1 pound (454 grams).

What is 2 lbs of potatoes?

2 pounds of potatoes is equal to 8 cups of cooked potatoes.

How many pounds is 2 medium potatoes?

A size potatoes are medium sized potatoes. They are usually used for baking and roasting. They are generally not very sweet.

Ketchup has become a staple condiment at every meal. But did you know that there are other options out there? What can you replace ketchup with?Ketchup is a thick, tomato-based sauce that originated in England. The word comes from the French word “ketchup” meaning “a kind of sauce or gravy”.: There are plenty of alternatives…

Have you ever wondered why some people seem to glow from within? Well, they might actually be using a Himalayan Salt Lamp. This device emits negative ions that create a calming effect on our bodies. Himalayan salt lamps are known for their ability to improve sleep quality and reduce stress levels. They also promote relaxation…

Spam has become a common part of our daily lives. The question is, how long can spam survive in the refrigerator? Spam is unsolicited e-mail sent from a third party without permission. This type of email is often considered annoying and spam, but it also contains valuable information. Spam can live for months or even…

Let us discuss few more aspects of Natural Release in an instant pot: Natural release is a feature found in many electric pressure cookers. It allows the user to know if the food being cooked is done by releasing the pressure from the cooker. This is done by pressing the button on the side of…