Rhubarb is a vegetable that grows in the springtime. It has a tart taste and is often used in pies and jams. Rhubarb is also known as a “pie plant” because it is grown for its leaves and stems. The leaves are used to make tea and the stems are cooked into stews and soups.

The rhubarb season lasts from March through May, but you can buy fresh rhubarb year-round at your local grocery store or farmers’ market. If you want to grow your own rhubarb plants, they will need about six weeks of cold weather before being planted out. You should start seeds indoors four to five months prior to planting them outside. Once the seedlings have been transplanted outdoors, keep an eye on their growth so that they don’t get too big.

How to buy the best rhubarb?

You may find yourself asking how much rhubarb costs when buying it at the supermarket. Prices vary depending on where you live and what type of rhubarb you’re looking for. 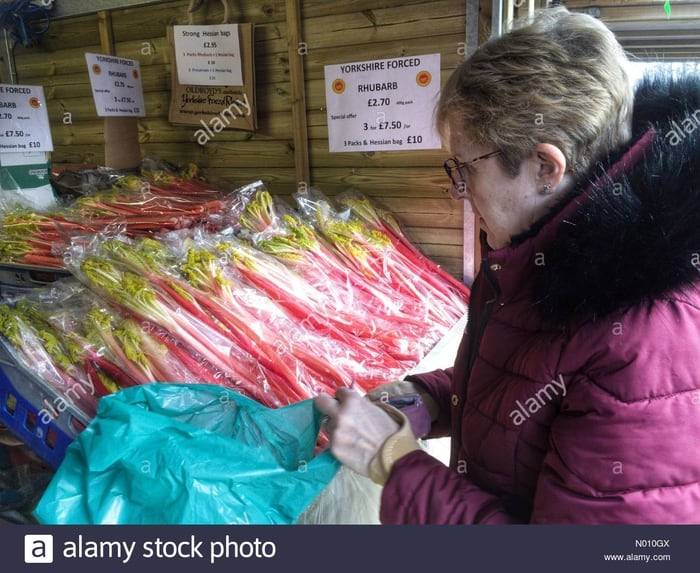 Fresh rhubarb tends to be more expensive than frozen rhubarb. Frozen rhubarb comes with many benefits over fresh rhubarb: it’s already cut up, ready to use right away; it doesn’t spoil quickly as fresh rhubarb does, and it keeps longer without losing flavor.

Look for bright, shiny, fat stalks when buying rhubarb. They should be neither too large nor too small. The stalks of fresh rhubarb are usually red or have a reddish tint to them. Make sure the stalks don’t have any leaves on the ground. The leaves contain oxalic acid, which is poisonous and should never be consumed, so make sure to remove them before eating. A long cooking period is best for thick stalks to soften. Thin stalks are more delicate and easy to prepare.

What should I look out for when buying rhubarb?

Look for firm stems without any soft spots. Soft spots indicate rot. Also, check for bruises on the leaves. Bruises may mean insects were feeding on the leaf.

When purchasing rhubarb, avoid those with yellowed leaves. Yellowed leaves usually mean the plant was stressed due to poor soil conditions. When storing rhubarb, keep it away from direct light. Store rhubarb in plastic bags in the refrigerator crisper drawer. Do not wash rhubarb before using it. Wash just after purchase.

How to tell if rhubarb is ripe

When purchasing rhubarb, look for signs of ripeness such as color changes, softness, and size. When choosing rhubarb, choose firm stalks with no bruises or cuts. Avoid those that feel mushy or spongy. Look for stalks that are heavy for their length. Ripe rhubarb should not smell like ammonia.

Learn More:  How to know if celery is spoiled? (5 ways)

If you plan to freeze rhubarb, wait until after picking it to do this. This way, the fruit won’t lose nutrients while sitting around waiting to be processed. Freezing preserves the quality of rhubarb by slowing down enzymatic activity.

In most parts of North America, rhubarb is available all winter long. In some areas, however, rhubarb is only available during certain seasons. For example, rhubarb is typically harvested between April and June in New England.

Rhubarb grows best in the garden between April and June. This rhubarb produces a large number of delicate stalks and little fruits. From mid-spring through mid-summer, rhubarb is in season. Hothouse rhubarb, which is picked in late winter or early spring, is used to extend the season. Oregon and Washington produce the majority of open-air rhubarb.

The harvest of hothouse rhubarb takes place in the spring.

Field rhubarb is also known as "winter" rhubarb because it is harvested in the fall and stored throughout the winter.

It has fewer stalks per plant compared to garden rhubarb. Field rhubarb is often sold under different names including "dwarf", "early", "late", and "short". Dwarf rhubarb is smaller than other varieties and is ideal for growing in containers. Early rhubarb is harvested earlier than others.

Yes! You’ll find rhubarb at your local grocery store year-round. If you’re looking for an alternative to strawberries, try rhubarb instead. Its tart flavor pairs well with sweet desserts and pies.

Rhubarb is accessible throughout the year. There are several factors at work herein. To begin with, many people prefer raw rhubarb over cooked rhubarb because they feel cooked rhubarb loses a lot of taste. Second, rhubarb grows well in the winter. Finally, rhubarb grows best in cooler climates. furthermore, rhubarb does not require much sunlight. These three reasons make rhubarb one of the easiest vegetables to grow indoors.

To keep fresh rhubarb longer, cut off any leaves before storing. Store rhubarb in plastic bags in the refrigerator crisper drawer. Do not wash rhubarb prior to storage. Wash when ready to use.

Rhubarb may be kept in the fridge for 2 to 3 days. The flavor begins to disappear after that duration of time. Rhubarb that has been frozen can be stored in the freezer for up to 6 months. Thaw frozen rhubarb thoroughly before using. Then, on a baking sheet coated with wax paper, put it. Remove the stalks just above the point where they meet the leaves and chop them off. Freeze for a minimum of 24 hours. Put it in freezer bags and keep it in the freezer for up to 6 months.

Rhubarb on the counter

Most people will store vegetables or fruits that they plan to eat right away in the refrigerator. Rhubarb doesn’t last long when stored at room temperature. Keep your kitchen cool so that you don’t spoil the rhubarb. You can leave it out on the counter until you’re ready to use it.

If you want to preserve the quality of your rhubarb, then refrigerate it immediately after cutting. Place the pieces in a container filled with water.

Cover them tightly and let them sit overnight. In the morning drain the excess liquid and rinse thoroughly. Dry the rhubarb by patting it dry with clean cloths. Refrigerating preserves its crispness and prevents browning.

Why is rhubarb so expensive?

Because rhubarb is seasonal, its price varies greatly depending upon what part of the country you live in. In some areas, rhubarb is very cheap while in others, it costs more than $10 per pound.

Rhubarb is a costly leafy green that grows in small quantities each year and is only available in the spring and summer. If the weather is poor, the entire harvest may be affected, leading to inflated prices. When rhubarb isn’t in season, it’s tough to locate individuals who can grow it. Because of the restricted crop amounts, it’s not surprising that this delectable plant is more expensive at that time of year.

Learn More:  Can you add yeast after the dough is mixed? (+5 Tips)

You’ve got this! Just make sure the green leafy tips are removed first. The stalks should then be thoroughly washed under running water. Clean kitchen towels are used to dry them until they are fully dry. Place the dry stalks in a freezer bag and freeze for at least one night. When you’re ready to utilize the stalks, remove them.

Store frozen rhubarb for up to two months in the freezer. Make sure the rhubarb is defrosted before using it. Rhubarb may be frozen in a single layer on a baking sheet. If you’re short on time, put them all in a single bag or container right immediately; we won’t bother to separate them. Simply divide the quantity required for one pie (or whichever dish) and freeze the pieces separately. Keep in mind that it will be quite mushy once frozen. There will be threads and it will be fibrous, but it will be considerably softer than raw rhubarb.

If you want to enjoy rhubarb all year long, buy plants or seeds now. Plant them outside during fall and bring them inside once temperatures drop below 50 degrees Fahrenheit. They will continue to produce until frost hits.

I hope this post will help you when you will be in the market for buying rhubarb and with your food curiosities as well.

Contents show
1 How to buy the best rhubarb?
1.1 What should I look out for when buying rhubarb?
1.2 How to tell if rhubarb is ripe
2 When is rhubarb in season?
2.1 The harvest of hothouse rhubarb takes place in the spring.
3 Is rhubarb available year-round?
4 How to store Rhubarb?
4.1 Rhubarb on the counter
4.2 Rhubarb in fridge
5 Why is rhubarb so expensive?
6 Can I freeze fresh raw rhubarb?
6.1 Related Posts
Haley Schroeder

Many people who eat artichokes develop gas or bloating after eating them. Is this because they contain certain compounds that irritate our digestive system? Or is it something else? The artichoke plant (Cynara scolymus) has been cultivated since ancient times. It consists of two large leaves surrounding a central stalk and several flowers. In addition…

Hummus is a delicious dip made from chickpeas (or garbanzo beans). It’s usually served warm or cold, and has a creamy texture. Hummus is often eaten at parties, picnics, and other social events. But did you know that some brands of hummus contain mold spores? These spores can cause food poisoning, especially in infants and…

Christmas is over, but you still have some leftovers from last year’s holiday meal. Can you freeze them? If yes, then why?Freezing food is a great way to preserve its nutrients and extend its shelf life. This is especially true for meats such as turkey or ham. The freezing process also helps reduce the risk…

Rice has become a staple food around the globe. But did you know that some varieties of rice can spoil after only a few days?Rice is a grain that comes from the grass Oryza sativa L., native to Asia. There are over 20,000 varieties of rice grown worldwide, each with its own unique characteristics.There are…