You love cooking Thai food at home. If only your coconut milk was thicker, you wouldn’t have to rely on canned or powdered options. You might also be surprised to hear that thickening it isn’t much harder than adding water to plain milk. In this video, I share 3 simple ways to thicken homemade coconut milk without any additives. Let me know in the comments below if you try them out!

All these thickener agents can be found at your local grocery store and they come in various forms, from powders to liquid concentrates. The key is knowing which ones are suitable for your recipe and how to prepare them. For example, cornstarch requires heat to activate its thickening properties whereas tapioca starch does not require heat and has a neutral flavor. 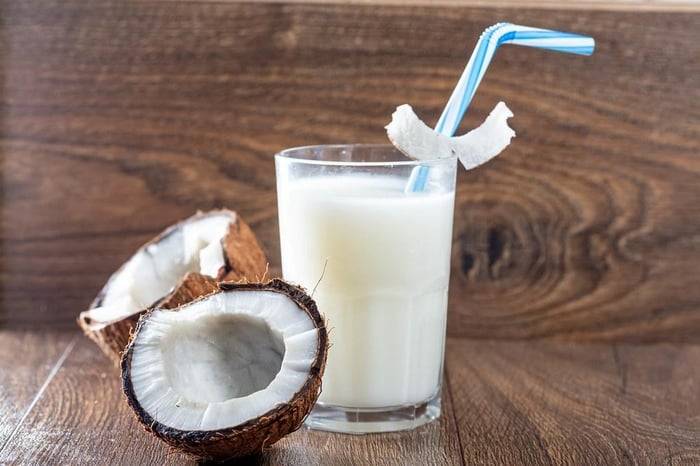 How to thicken Coconut Milk?

Thicken coconut milk using arrowroot powder. Soak 1/2 cup of arrowroot flour in 2 cups of hot water for about 10 minutes. Add salt if required. Then mix well until no lumps remain. Heat 3 cups of unsweetened, full fat coconut milk along with the mixture of arrowroot and bring to boil. Once boiling, turn down the flame and let it simmer for 5 minutes on medium low heat. Remove from heat after 5 minutes and allow to cool completely. Store in an airtight container in the refrigerator for up to 7 days.

Thicken coconut milk by soaking cashews in warm water for 20-30 minutes. Drain and blend cashews into smooth paste. Mix 1/4 cup of cashew butter with 1/2 cup of coconut milk. Bring to a boil and then reduce heat to low. Simmer for 15 minutes stirring occasionally. Remove from heat and stir in 1 tsp of vanilla extract. Allow to cool completely before storing in an airtight container. This will keep in the fridge for up to 4 weeks.

As a thickening agent, you can use cornstarch or all-purpose flour. To make a slurry, dissolve some cornstarch or cornflour in a bowl of cold water. Then, add the slurry to the coconut milk and heat until the desired consistency is reached.

How to make coconut cream from coconut milk?

To obtain the richest possible version of coconut cream, let the coconut milk cool completely before starting the processing. After cooling, cover the bowl containing the milk tightly and refrigerate overnight. The next day, open the jar and skim off the creamy white stuff (the top layer) using a spoon. Discard the remaining milk/water. For homemade coconut cream recipes, see our post on how to make coconut cream.

Learn More:  How to boil milk without burning it?

What can coconut milk be used for?

Coconut milk is obtained from mature coconuts, and it contains about 50% fat. It is thick, rich, delicious, creamy and smooth, with no odor or taste of coconut. Coconut milk can replace dairy products such as cream, butter, yogurt, cheese and ice cream.

It can be added to various types of dishes, especially savory ones, and can even take the place of heavy cream sauces. For instance, you can add it to soups, stews, curries, rice, pasta, breads, pancakes, meatloaf, spaghetti sauce, and baked goods. A few recipes call for 2 cups (480 ml) of unsweetened coconut milk instead of whole milk. Try substituting it for evaporated milk.

You can also mix it into batters and doughs, either alone or mixed with regular milk. Coconut milk adds richness and flavor to many desserts. For example, if using vanilla extract, stir 1⁄4 cup (60 ml) of coconut milk into the batter.

Why does coconut milk turn gray? 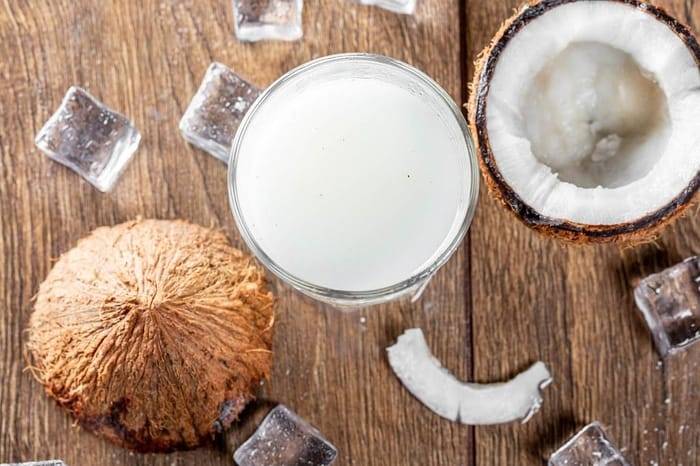 When stored at room temperature, coconut milk turns gray because of oxidation. Oxidation occurs when oxygen reacts with fats and oils present in the milk. As a result, the milk becomes rancid. You will notice that the color changes from light yellow to dark brown. If this happens, discard the milk immediately.

Can I freeze coconut milk?

Yes, you can store coconut milk in the freezer. However, keep in mind that freezing coconut milk causes the fat to separate from the liquid. When defrosted, the milk should be stirred vigorously to reincorporate the separated fat back into the liquid.

How long can coconut milk last?

Coconut milk is really versatile because it comes from the fruit of a tree and not a plant. A typical batch of coconut milk will last about three weeks if stored properly. You could freeze your coconut milk to extend its shelf life even further. Coconut milk freezes very well; however, you will lose some of the nutritional value. To avoid losing nutrients in frozen coconut milk, store it in the refrigerator until thawed. Once the milk is thawed, shake it vigorously prior to using. This helps get rid of any clumps of solidified milk that were formed during freezing.

Thickening coconut milk is a great way to give it a creamy consistency while keeping it light. To thicken coconut milk, mix 1/4 cup of cornstarch with 2 cups of coconut milk until smooth. Heat the mixture in a saucepan over medium heat until thickened. Remove from heat and stir in salt to taste. Serve immediately.

Learn More:  Can you brew tea in milk?

How to thicken coconut milk with reduction technique?

How to make coconut cream from coconut milk?

How to thicken Coconut Milk?

Coconut milk is a very versatile ingredient that can be used in many different ways. It can be used to make curries, soups, sauces, desserts, drinks, smoothies, ice cream and even baked goods. One of the easiest ways to thicken coconut milk is to simply add cornstarch. Simply mix 1 cup of coconut milk with 2 teaspoons of cornstarch and let sit for about 5 minutes. This will allow the cornstarch to absorb into the coconut milk. Then strain the mixture through cheesecloth or a fine mesh strainer.

Milk is a liquid that comes from the mammary glands of mammals. It is a white color and contains proteins, fats, carbohydrates, minerals, vitamins, enzymes, and lactose. Milk is used for drinking, cooking, baking, and other uses. It is produced by the mammary glands of cows, goats, sheep, buffalo, camels, yaks, reindeer, and others.

Can my breast milk not have enough fat?

How can I increase the thickness of my milk?

Coconut cream is made from the milk solids left after making coconut milk. It’s thick and creamy and can be used in many different ways. Coconut cream is usually sold in cans or jars but sometimes comes frozen. To get coconut cream whipped properly, you’ll need to thaw it completely. Once it’s thawed, put it into a bowl and beat it with a hand mixer until it becomes light and fluffy.

Can your breast milk be too watery?

Coconut milk is very thick and viscous. It contains a lot of solids and proteins. This is why it takes longer to thicken. To get rid of these solid particles, we need to reduce the quantity of liquid. We can do this by adding sugar or cornstarch. Sugar will give a sweet taste while cornstarch gives a creamy texture.

Learn More:  Can you use vegetable oil instead of butter for cookies?

Breast milk is a natural substance produced by women during pregnancy. It contains nutrients necessary for the growth and development of babies. It is also used by mothers to feed their babies after birth. However, breast milk can become too watery if not properly stored. This happens because of the presence of certain bacteria that can multiply rapidly in warm conditions. In addition, breast milk can also turn sour if left unrefrigerated for long periods of time. Therefore, breast milk needs to be refrigerated immediately after collection from the mother.

Why is my coconut milk not thickening?

Breast milk is not supposed to look watery. It is normal for breast milk to look watery. This happens because the mother’s body produces extra milk during pregnancy. As soon as the baby comes out, the milk gets released into the breasts and it looks watery.

What do you do if coconut cream won’t whip?

How do you stabilize coconut milk?

Are you aware that some foods are better cooked than raw? Sweet peas are no exception. In fact, they taste much sweeter after being boiled or steamed.Sweet peas Petunia hybrida are a member of the pea family. They are grown worldwide and are often eaten fresh, frozen, canned or dried. The flowers are edible and…

Do you ever wonder if there’s anything left in the fridge after you’ve eaten all the food? Or maybe you want to eat something else but don’t want to throw away the old stuff. If you’re wondering how long you can keep food in the refrigerator, then you need to know that it depends on…

Cockatiels are small parrots native to Australia. They are very friendly birds and love to interact with humans. However, there are certain foods that they should never eat. Carrots are a common ingredient in pet bird feeders. Cockatiels are known to enjoy eating these tasty treats. Unfortunately, they don’t digest them well and often end…

When you want to eat cheese, you don’t always have time to slice it into cubes or slabs. That’s why frozen cheese slices are becoming very popular. They’re convenient because they come already sliced, and they’re also healthier since they contain less fat.Frozen food has become extremely popular over the years. The convenience of having…

What’s the price of a bunch of green onions at the grocery store? How much does a bunch cost? If you want to get the best deal on fresh produce, then you need to know the prices of different items. This article explains you how to figure out the price of a bunch. 1qx_ZNQ0d5w I’ll…