Puff pastry is a type of French pastry that is typically used for making pies. It is also known as “pâte feuilletée” or “pâte brisée”. Puff pastry is usually made using butter, flour, water, salt, sugar, eggs, and yeast.

You can use puff pastry to make delicious desserts such as quiches, tarts, pies, and even savory dishes.

Pie crust is a type of pastry dough used to make pies. It is usually made from flour, butter, sugar, eggs, salt, and shortening. The ingredients are mixed together until smooth and then rolled out into a circle. There are two main types of pie crusts: sweet and savory. Sweet pie crusts are often filled with fruit, nuts, chocolate, or other sweets. Savory pie crusts are typically filled with meat, vegetables, cheese, or other savory ingredients.

The ingredients for pie crust and puff pastry are nearly identical. Water, flour, butter, a sprinkle of salt, and sugar are all used in this recipe. The method they’re created, on the other hand, is the most significant distinction, as it determines the ultimate product.

And you might be wondering if you can substitute one for the other, given that they both contain the same components. In principle, you can, but the texture and flavor differences separate them in actuality. Let’s compare and contrast pie crust with puff pastry to see what the key differences are.

Puff pastry is a type of pastry dough that is used to make pies and tarts. It is usually filled with fruit, custard, cream, mincemeat, etc. 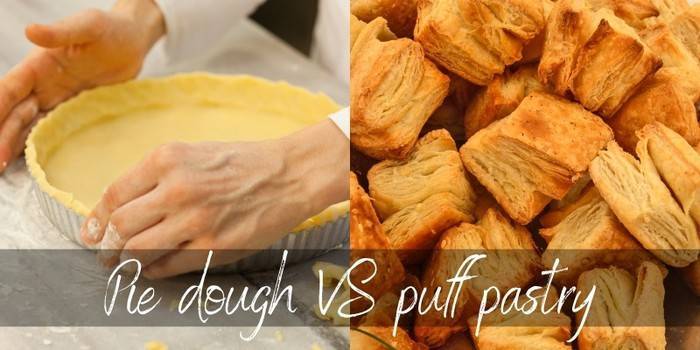 Pie crust is a type of pastry that is used to cover a filling such as meat, fish, vegetables, etc. Which is better? Well, both types of pastry are delicious and there is no wrong answer. However, if you want to save time and effort, then puff pastry is the way to go.

There’s a big difference between how butter is used and how it’s utilized. The butter in pie crust is chopped into tiny bits and incorporated into the dough, resulting in a texture similar to wet sand. The butter is applied in thin layers to puff pastry. As the dough is laminated, thin, alternating layers of dough and butter are formed.

Finally, the flavors of the two doughs are vastly different. The butter is more noticeable in the pie crust, which has more texture and taste. Puff pastry is occasionally made with margarine instead of butter, which gives it a distinct flavor. It also flakes and cooks in a unique way.

Puff pastry is a laminated dough

A lamination process creates puff pastry by layering sheets of dough over each other. This results in an airy, flaky pastry that holds its shape well when baked. 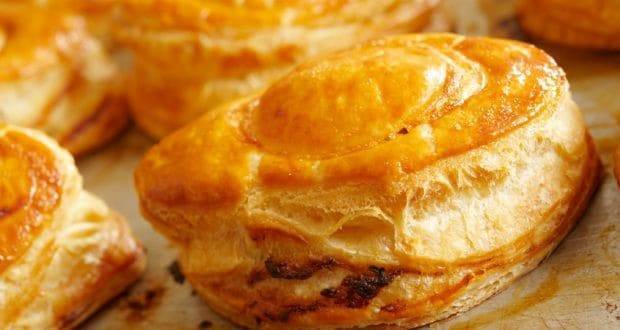 In order to create puff pastry, the first step is to roll out a sheet of dough. Then another piece of dough is placed atop the previous layer. A rolling pin is pressed down onto the top piece of dough, flattening it slightly. The way butter is utilized is a key distinction between puff pastry and pie dough or crust. Both utilize butter, however, margarine puff pastry is occasionally available.

The butter in puff pastry is used to separate dozens of thin layers. Spread a layer of water, flour, and a pinch of salt across the surface. On top of it, you put a layer of cold butter that has been flattened out to the same size as the dough. Fold the dough in half and re-roll it. Depending on whether you fold in two or three layers, you now have twice or treble the number of layers.

You must repeat the folding and rolling process at least four times, and you must rest the dough between rolls to let the butter firm up. If not, it will soften and leak through the layers. You are therefore left with a collection of dozens of layers of thin, butter-sized layers. Pie crust is a creature entirely distinct. Butter is also used, however, butter is needed in little bits. It’s all about coating with your dough small butter bits, and ending up with a loosely looked like wet sand. It produces a compact layer if you pick it to utilize it truly as a pie-base or crust.

A pie crust should be crumbly because it contains lots of fat. Fat makes for a tender base. In contrast, puff pastry does not contain any fat. Instead, it uses moisture from the egg wash to produce a light, fluffy product. 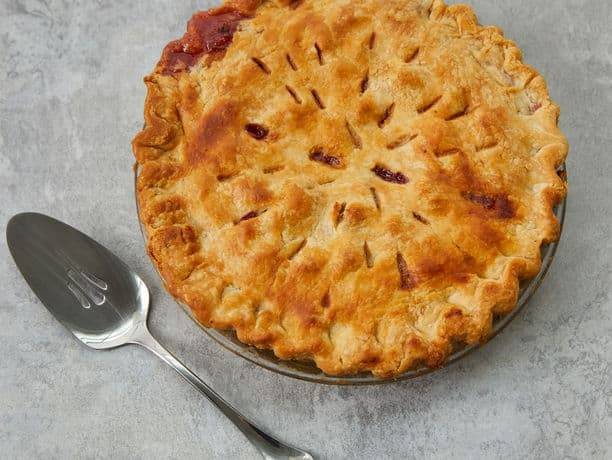 When making pie crust, use shortening rather than oil. Shortening adds crispness while oil softens the dough. When using shortening, add some sugar to help bind the ingredients together. Sugar helps keep the fats solid during baking.

Due to the method in which the butter in these doughs is utilized, they cook differently. The butter cooks the dough in powder pastry, splits the layers, and the water in the dough becomes steam and increases the dough. That’s the name of the puff. Pie crust is considerably more static, and depending on how it is used, can grow more crispy and/or crumbled. The butter is equally dispersed inside the mash, and it is evenly cooked, which gives you a butter flavor rather than a puffed pastry.

The disadvantages are, that bubbling pastry can grow highly bubbling and quite dry. You must bake it blind, without weights, if you use it as a pie foundation, but dock it clearly. Much. Much. In this manner, steam will cook them from between the two layers but will not ascend to the sky.

Puff pastries are delicate, too flaccid

Puff pastry is delicate, so handle carefully when working with it. Do not overwork the dough, otherwise, you’ll end up with tough, brittle pieces. Also do not freeze puff pastry before cooking; freezing causes the gluten strands to tighten, resulting in tougher pastries.

If you want to make sure your puff pastry doesn’t become soggy, brush it lightly with an egg wash made by mixing one whole egg plus 1 tablespoon milk. Because puff pastries are produced, it might become too delicate if you use them for anything that is really heavy and moist. So, when you attempt and take a slice out of the bakery, a pumpkin cake constructed with puff pastry will break.

It can get too flaccid, as every layer cooks. The top of the layer is dry and the flakes go everywhere as you bite into it. Pie crust is stronger and holds better together. It’s thicker and what you see is what you get, since once you bite in it, it won’t blow up or dissolve.

In conclusion, I would say that both types have their advantages and disadvantages. Puff pastry has its own unique taste and texture, whereas pie crust is much easier to work with. Both require different techniques, though, and each type requires slightly different preparation methods.

I hope this helped you understand the differences between the two and all with all your food curiosities.

Eggs are a staple food in our daily meals. They are also very nutritious and contain high levels of protein and other nutrients. But did you know that some eggs are outdated? Are they safe to eat?Eggs are a great source of nutrition. They provide essential nutrients such as proteins, vitamins, minerals, and fats. The…

Boy choy is a Chinese cabbage that has a mild flavor and crunchy texture. It’s often served raw or stir fried. The leaves are also good in soups and salads. You can find boy choy at Asian grocery stores and farmers’ markets. If you don’t want to cook it, you can store it in the…

While eating a juicy pomegranate, this thought must have struck your mind. Pomegranate is so close to a citrus fruit, it has a tangy flavour, smells awesome and is so juicy that every bite of it spills a red liquid. Is pomegranate considered a citrus fruit? Sure, it does not look like a citrus fruit,…

Most Americans don’t even consider eating wild game meat, let alone cooking it or serving it at home. Is this because they fear being caught by wildlife officials? Or is it due to the misconception that wild game meat isn’t fit to eat? You probably wouldn’t be surprised to learn that coyotes are often hunted…