Black soy sauce is made from fermented soya beans. It has a rich, dark color and an intense flavor that can be used in many different ways. The most common use of black soy sauce is as the base for dipping sauces or marinades. You may also find it on sushi rolls, soups, stir-fries, salads, noodles, rice dishes, desserts, and even some drinks!

Soy sauce is a fantastic culinary ingredient. It can be a dip, a condiment, a sauce, or a dressing, depending on your preferences. And we’re all familiar with how soy sauce makes food look: black, with a deep reddish-brown hue, and extremely tasty. But, as much as we adore soy sauce, we can’t help but be perplexed as to why it’s so black. In some lights, it may appear black, while in others, it may appear as an extremely dark red.

Thankfully, there is a very professional and detailed explanation that will make everything more clearly. We’ll attempt to make things simple because there’s some chemistry involved.

Why is soy sauce black? 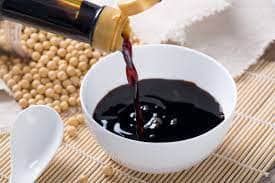 Melanoidins are formed by Maillard reactions between amino acids and sugars. These chemical changes occur naturally during the cooking and baking processes. Soy sauce is black or extremely dark brown for a variety of reasons, many of which may be traced back to a chemical event called the Maillard reaction. This is the same process that produces the dark color and crispiness of seared food.

The second reason for the dark hue of soy sauce is due to the addition of food coloring or flavorings that have a deeper tint. Caramel, for example, may be used as a sweetener as well as to deepen a light soy sauce. But, for the most part, it’s the Maillard reaction, which we’ll describe in a moment.

How soy sauce gets its color

The Maillard reaction is a chemical reaction that sounds fancy and enigmatic but is really rather ordinary.

If you’ve ever seared a steak, you know how important it is to use high heat and not move the meat for several minutes, until it’s brown on one side and readily moves. A Maillard reaction occurs when food browns as a result of cooking, such as when sugar is melted for caramel. This mechanism is based on the interaction of amino acids with reducing sugars (sugars that can be reduced, such as table sugar or most natural sugars).

Learn More:  How do you keep spaghetti sauce from burning?

This reaction requires both heat and time to occur. In the case of steaks, high heat and a few minutes are sufficient. However, when it comes to soy sauce, things are a little different. In the past, soybeans were fermented in large urns in the sun to keep them warm.

Soybeans are now fermented in containers in chambers that are kept at a consistent temperature. There are roasted grains, brine, and one of two molds – rice or soy mold – in addition to the soybeans themselves. The browning and deepening of the sauce is caused by the interplay of these ingredients over months at a steady warm temperature.

You’ve probably seen dark and light soy sauce on store shelves. You may have also noticed that the soy sauce in a Chinese restaurant is practically black. Why is it, and why are there so many different colors? The age of the soy sauce is a significant consideration. Remember that the Maillard process is responsible for the dark color, and it requires heat and time to occur. The darker the soy sauce becomes after it has fermented for a long time. The umami flavor intensifies, and the soybeans are less noticeable than in a lighter sauce.

Dark soy sauce is a type of aged soy sauce that is saltier and sweeter than ordinary soy sauce. Also, it’s a tad thicker! Light soy sauce is an extremely young soy sauce that will never be more than a dark golden brown in color. As a result of being left to ferment for a shorter period of time, the soy bean taste is more clearly discernible, and it isn’t as thick, being more on the watery side.

Why is soy milk white?

While soy milk is made from defatted soybeans. Defatting removes some of the oil content but leaves behind proteins called globulins. These proteins give soy milk its characteristic creamy texture. While soy milk is often sold in cartons rather than bottles because it doesn’t separate as regular soy milk does. 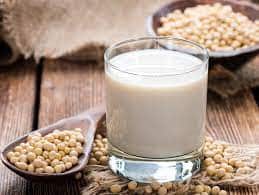 There are other types of soy milk available too: low-fat, non-dairy, organic, flavored, fortified, unsweetened, plain, vanilla, chocolate. We all know that soy sauce darkens due to fermentation, heat, the Maillard process, and age. This occurs when food is exposed to intense heat over an extended length of time. What about soy milk, though? We need to look at how soy milk is created in this situation. Soak soybeans in water for several hours (or until thoroughly hydrated) before grinding them in a high-powered blender. The procedure is similar to that of creating any other nut or plant milk.

The sediments are filtered after the beans are crushed, and the leftover liquid is soy milk. It’s then cooked, both to make it safe to drink and to extend its shelf life.

That’s all there is to it! Despite being boiled/subjected to high heat, the milk has not become a dark brown color. This is due to the fact that it is only cooked for 15-20 minutes, and if left to simmer for several hours, it may get somewhat darker, but this would need the addition of more sugar. Soy milk is white – or off-white, to be more precise – since the insides of the beans are that color, and boiling it won’t change it much.

Soy sauces can vary greatly depending upon their ingredients, manufacturing processes, and storage conditions. There are three main categories of soy sauce: Japanese soy sauce, Chinese soy sauce, and Korean.

Each category contains numerous subcategories based on differences in production methods and ingredient sources. For example, Japanese koji-based soy sauce uses rice wine vinegar instead of malt vinegar; Chinese Shaoxing is produced by steaming the soybeans first, and Korean gochujang is made with red pepper flakes. Each style of soy sauce has unique characteristics which distinguish it from others within the same category.

This is one of the most popular styles of soy sauce used throughout Asia. In Japan, where it originated, it was originally known as Shiro miso. Today, however, it is commonly referred to simply as "soy sauce." Its primary source of protein comes from wheat flour, barley, buckwheat, corn, potato starch, and tapioca. Other common additives include salt, caramel coloring, monosodium glutamate, calcium sulfate, sodium benzoate, potassium sorbate, and artificial flavors.

Learn More:  This Is How to Keep Burgers From Shrinking

In China, soy sauce is also known as Shaoxing. It differs significantly from Japanese soy sauce in terms of flavor profile and composition. Most notably, it lacks wheat flour and gluten, so it cannot be fermented like traditional Japanese soy sauce. Instead, it relies heavily on glutinous rice, yeast extract, and natural preservatives such as acetic acid and citric acid. Some varieties contain added MSG.

In Korea, soy sauce is called doenjang. Unlike the two previous styles, it does not use wheat flour, nor does it rely on yeasts or bacteria for fermentation. Rather, it is traditionally prepared using naturally occurring enzymes found in legumes, grains, vegetables, fruits, herbs, spices, and seaweed. Doenjang is typically aged for anywhere between six months to five years.

In conclusion, we can say that soy sauce is actually quite simple to understand. There are two main factors involved with making soy sauce; one is the amount of time spent soaking the soybeans, which determines their size and shape, and the second factor is the temperature during cooking.

If you want your soy sauce to turn out perfectly every single time, follow these steps: soak the soybeans overnight, grind them into fine pieces using a high powered blender, cook the mixture slowly for 2-3 hours, strain through

Chocolate has been around since ancient times. However, did you know that there are certain types of chocolate that contain dangerous ingredients? Chocolate contains a number of different compounds, including caffeine, sugar, fat, and cocoa butter. Some of these components are beneficial, while others aren’t. xJq8n_4zgkc In this article I’m going to talk about three…

Cooked seafood lasts longer in the fridge than raw. This is because cooked seafood contains less water (and therefore fewer bacteria) than raw fish or shellfish. How long does cooked fish last? For anyone who has ever had to throw out leftovers from a dinner party, the answer might seem obvious. But did you know…

Baking soda is great for cleaning, deodorizing, and even killing weeds. But did you know that it can also be used to clean your home or kill bugs?Baking soda has long been a household staple, but its uses go beyond just cooking. From cleaning to gardening, baking soda is versatile enough to tackle a variety…