Cocoa butter is a naturally occurring lipid derived from cocoa beans. It’s a moisturizer and a softener for dry skin. It also aids in the reduction of stretch marks and the look of dry, damaged skin.

It’s also used in lipsticks, lip balms, face creams, and body lotions, among other things. Cocoa butter is a wonderful natural substance that has been used to treat a variety of skin problems for ages. It’s also recognized for its ability to keep skin supple and hydrated. However, there are a few techniques to keep cocoa butter fresh for longer.

Cocoa butter is delicious on its own, and it’s the heart of each chocolate bar. Cocoa butter is utilized in certain skincare products and other nut butter, so even if you don’t like chocolate, you could like it. One of the most often asked questions is if cocoa butter is vegan.

The name may be deceiving, but for vegans or those who need to avoid dairy in general, this is crucial information. It, today we’re going to discuss whether cocoa butter is genuinely vegan, and we’ll do so from two perspectives. We’ll start with ingredients because that’s the first and most pressing worry for most people.

The short answer is yes. There aren’t any animal-derived components in cocoa butter. That said, some companies use milk proteins as emulsifiers when making their products. 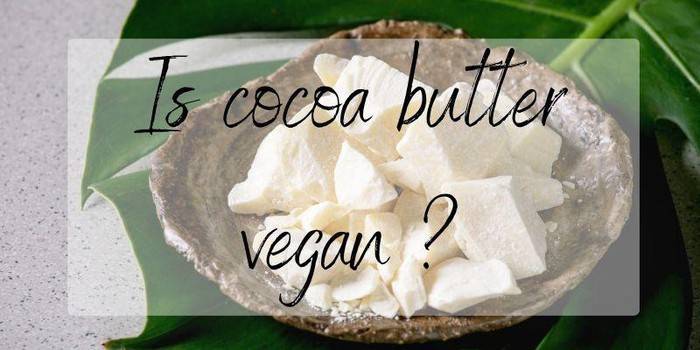 These include casein and whey. In fact, many cosmetic manufacturers add these substances into their formulas to help them stay stable during storage. This means they can last longer without separating out. They also make your product feel smoother and more luxurious. Cocoa butter is vegan-based only on its components.

Cocoa butter has no dairy, as it is made up entirely of the lipids found in cocoa beans. This implies cocoa butter is derived entirely from the roasted, ground, and pressed cocoa beans. Cocoa butter makes up a bit more than half of the weight of a cocoa bean, so there’s a lot of it in each one.

The word "butter" in the name might be deceiving.

Despite the term "butter" in its name, cocoa butter is dairy-free.

The term "butter" is only as significant in nut butter as it is in dairy butter – it’s merely a means of indicating that the product has a high-fat content. And, like dairy butter, it solidifies at low temperatures and melts at body temperature, which is at 35 degrees Celsius/95 degrees Fahrenheit. In this situation, cocoa butter is a little different. Cocoa butter is solid at room temperature, unlike other nut butter such as coconut butter or shea butter. It’s as hard as a bar of dark chocolate, and instead of crumbling gently, it’ll break into pieces.

Learn More:  Can you freeze buttermilk?

This doesn’t mean it won’t melt though. If left alone, it will eventually soften over time. But, once melted, it becomes liquid again. So, while it isn’t exactly similar to dairy butter, it does have properties associated with it. 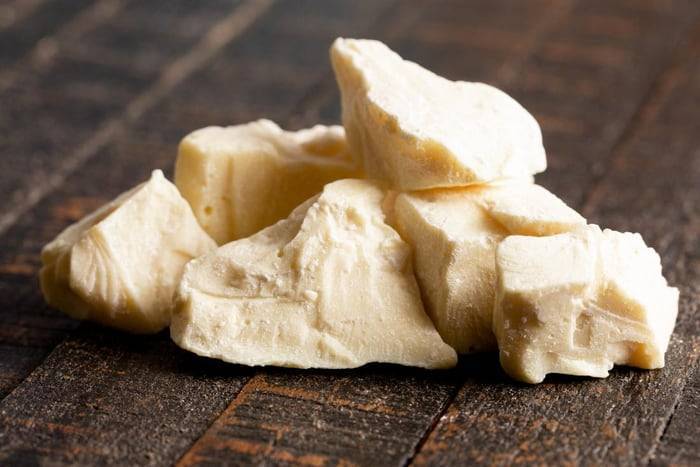 In addition to being vegan, cacao butter is also considered an antioxidant. Antioxidants protect against free radicals, which cause damage to cells throughout our bodies. Free radical damage occurs naturally, but it increases with age. If you like dark chocolate, you’ll be happy to know that it’s the most vegan chocolate available.

Keep in mind that, depending on the manufacturer, the chocolate bar might be made in a facility that also produces dairy goods, such as milk chocolate.

So, even in dark chocolate, trace quantities of dairy may be present, and this is always indicated on the label, towards the end of the ingredient list. Something along the lines of "may contain traces of peanuts or dairy," or "this product was produced on a line that also produces dairy goods." Of course, there are firms that manufacture chocolate without using any dairy. These will have a vegan certificate on the box and will mention that they are dairy-free on the label.

How cocoa butter is made

Cocoa butter comes from the beans of Theobroma Cacao. When these beans are fermented, roasted, ground up, pressed, then separated out, we get cocoa liquor, which is basically pure cocoa solids. Then, after separating off some of the remaining water, we’re left with cocoa nibs.

Finally, when the nibs are dried, pulverized, and processed further, we arrive at cocoa butter.

The extraction of the butter is very simple, although it takes some time. It’s one of the reasons why it’s so costly.

Let’s begin with the cocoa beans. They’re harvested and opened once they’ve reached full maturity, revealing the cocoa beans inside. The beans are fermented in vats for a few days, allowing the cocoa/chocolate flavor to emerge. They don’t appear especially appetizing, and they don’t taste that appetizing either when raw. The beans are dried and roasted once they have been fermented. This will take many days, and the full procedure might take weeks (two at its fastest pace).

Learn More:  Why Is My Rutabaga Bitter Heres What We Know

Cocoa beans are as vegan as it gets

Once the beans are dry, they can be crushed into smaller pieces called nibs. Nibs are usually sold by weight, meaning that each pound of nibs yields about 1 cup of nibs. Each cup of nibs weighs approximately 2 ounces.

Nibs are often used in baking because their texture resembles flour. However, if you grind them down too much, they become bitter. So, manufacturers use different methods to break down the nibs before grinding them into powders.

Let’s get back to the cocoa beans. There’s no reason why cocoa butter can’t be vegan because it’s produced entirely of cocoa beans. Although cocoa beans do not contain dairy, they do contain lipids. Remember coconut butter or the fact that coffee contains its own natural oils (particularly Robusta), or peanuts, and peanut oil if you believe fats in beans or seeds are strange. The lipids naturally contained in cocoa beans are the only ingredients in cocoa butter since they are never combined with anything else throughout the cocoa butter extraction process.

Keep an eye out for mixed cocoa butter

If you see something like “cocoa butter” listed under the name of your favorite chocolates, keep in mind that it could actually be a mixture of two types of cocoa butter. For example, I found a bar labeled simply “butter” that turned out to be a mix between cocoa butter and palm kernel oil.

Cocoa butter is usually combined with other nut butter, with shea butter and mango butter being popular additions. However, they are most commonly found in skincare products. Cocoa butter may also be used with a little amount of coconut butter in desserts, particularly organic or vegan variants. Unless we’re talking about chocolate or something specific, cocoa butter isn’t usually combined with anything animal-related like dairy or honey.

How to store cocoa butter?

1) Make sure your cocoa butter is at room temperature before using it.

Keeping cocoa butter at room temperature is the best method to keep it fresh. This will aid in the preservation of the product’s quality and the prevention of bacterial development.

If you have any dark-colored leftovers after you’ve used them up, store them in a container with a cover or wrap them tightly before storing them.

Plastic containers may be suitable for storing other oils such as olive oil, sesame oil, almond oil, coconut oil, and so on, but they are not suited for keeping cocoa butter because they prevent air circulation, which leads to oxidation.

Choose glass jars or bottles made of stainless steel or ceramic instead. When exposed to heat and moisture, these materials do not react chemically. They’ll endure a long time without deteriorating.

3) Use lids that are dark in color.

4) Do not expose yourself to direct sunlight.

Fats and oils are damaged by sunlight. As a result, keep your cocoa butter out of direct sunlight. Also, avoid placing it near windows where it will get hot during the summer. You may even wrap it in aluminum foil to keep it safe.

In conclusion, if you want to use cocoa butter in your recipes, make sure you buy only 100% pure cocoa butter. It has no additives whatsoever. If you don’t know what kind of cocoa butter you need, check our guide here! I hope now you are clear with all your doubts and also with your food curiosities.

Contents show
1 Is cocoa butter vegan?
1.1 The word "butter" in the name might be deceiving.
1.2 Dark chocolate is typically used in vegan chocolate.
2 How cocoa butter is made
2.1 Cocoa beans are as vegan as it gets
2.2 Keep an eye out for mixed cocoa butter
3 How to store cocoa butter?
3.1 1) Make sure your cocoa butter is at room temperature before using it.
3.2 2) Refrain from using plastic containers.
3.3 3) Use lids that are dark in color.
3.4 4) Do not expose yourself to direct sunlight.
3.5 Related Posts
Haley Schroeder

Do you love Italian food but hate the mess of making pasta? Do you want to learn how to cook authentic Italian dishes at home without having to spend hours slaving away in the kitchen? If you answered yes to both questions then this article might be for you! This article explains you how to…

We’ve all heard about the dangers of eating too much sugar or salt, but did you know that some foods contain unhealthy amounts of fat? Frozen pizzas are often high in saturated fats and trans fats, which can increase your risk of heart disease. Frozen pizza has become a staple food item in American households….

Do you drink coffee every day? If yes, then you might want to think twice before drinking it. Coffee contains caffeine, which has been known to cause hair loss. Coffee is one of the most widely consumed beverages in the world. In fact, according to the World Health Organization, around 3.2 billion cups of coffee…