Eggs are an excellent source of protein and nutrients. They also provide a lot of energy. However, there are two different ways to cook eggs. The first way is scrambled eggs. The other way is an omelet. Both methods are delicious and nutritious. However, which one is better for breakfast?

Scrambled eggs are usually cooked until the whites are completely set and the yolks are runny. On the other hand, omelets are cooked until the egg mixture is almost set. In both cases, the eggs are mixed together with seasonings such as salt, pepper, and butter.

Scrambled eggs are a delicious but messy dish that everyone likes but may be difficult to understand. It’s even a bit difficult to comprehend, especially if you’re attempting to understand all of the many ways you may cook one egg. After all, eggs are usually included in the ideal breakfast.

Let’s look at scrambled eggs and omelets because they’re the two most popular ways to cook an egg, and the line between them is often blurred.

The difference between scrambled eggs and an omelet lies in how much time it takes to make each dish. Scrambled eggs take about 5 minutes while making an omelet requires more than 10 minutes. This means that scrambled eggs are quick-cooking while an omelet needs a longer cooking time. 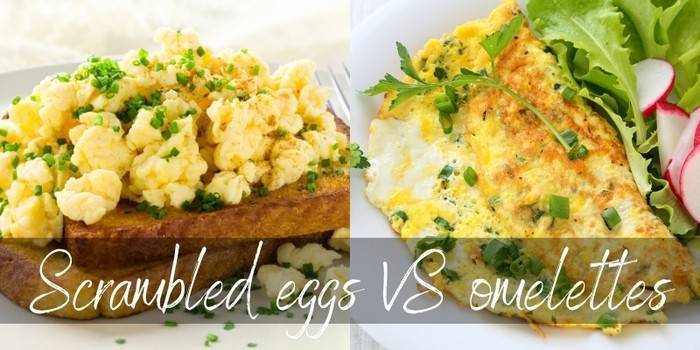 Scrambled eggs are still cooked eggs, but they’re drier than omelettes since most people try to thoroughly cook the eggs and end up overcooking them. Omelets are generally easier to prepare than scrambled eggs. You simply need to beat up your ingredients before adding them to the pan. If you want to add vegetables, herbs, spices, or cheeses, then do so after mixing everything else.

Learn More:  How long can eggs be left out?

You should always use fresh eggs for scrambling. Frozen ones will not work well. Also, remember to keep the heat low on the stovetop. Too high of a temperature could cause the eggs to burn.

Scrambled eggs are to be stirred continuously

If you’ve ever tried to scramble eggs, you know what I’m talking about: constantly stirring the eggs over medium heat. There’s no easy way around this step. Stirring helps prevent the eggs from sticking to the bottom of the skillet.

If you whisk the eggs for too long, they will turn dry and rubbery. Stop stirring as the white begins to firm up to avoid this problem. Egg curds are formed when scrambled eggs are prepared. Those runny whisked eggs are surrounded by small egg fragments that have begun to cook. Whisk, fold, and swirl scrambled eggs every few seconds to allow the curds to form but not to the point of congealing into an omelette. They will become creamy and barely form if you continually mix them while cooking them on low heat, which will serve as the basis for a French omelette.

The egg curds will congeal and adhere together as a single, large egg curd if you stop stirring entirely. This is how an American or Western omelet is made. There’s no need to stir. Fold the omelet in half and put it onto a dish after it’s cooked through (the top will still be a little creamy but not runny).

When preparing an omelet, there’s one thing you must consider: the amount of liquid inside the mixture. The reason why scrambled eggs stick to the pan is that they contain water. When you’re trying to flip an omelette, the moisture makes it difficult to move the entire mass without breaking apart. 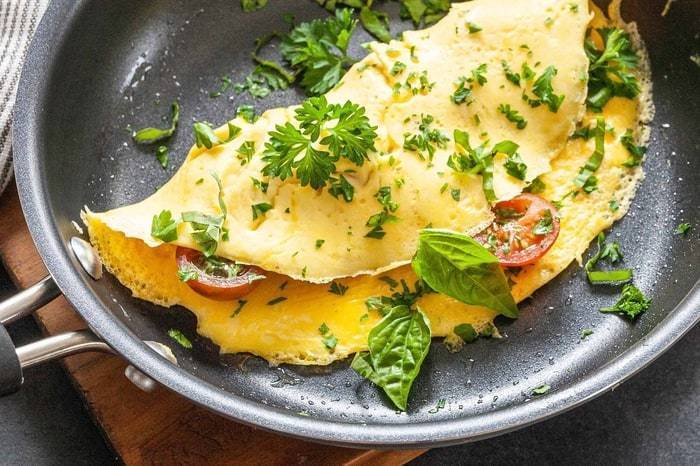 To solve this issue, place some oil on the surface of the pan first. Then pour off any excess oil with a paper towel. You’ll almost always have something on the side when cooking with eggs, whether it’s bacon, cheese, peppers, spring onions, or anything else. Omelettes have the ability to keep all of those toppings on the inside, or at least mainly on the inside. That is, after the omelet is almost done, you may add the remaining toppings, fold it over, and serve. It’s preferable to use this method with components that don’t require much cooking time.

Because the curds tend to stay together, scrambled eggs can’t actually hold on to any toppings. Back bits, chopped mushrooms, and red peppers are nearly guaranteed to get up on the egg curds’ outside. You could try folding and chopping the egg curds after they’ve grown larger to get around this, but you’ll only be halfway to an omelette.

Scrambled eggs have a tendency to dry out quickly.

This isn’t necessarily true, but many people believe so. Scrambling eggs requires constant stirring because the whites begin to set before the yolks finish cooking.

As soon as the whites start to solidify, the whole batch starts to turn out like a pancake. At this stage, the texture becomes very similar to scrambled eggs. However, the difference between these two dishes lies in their consistency. A scrambled egg has more fluidity than a hard-cooked egg.

A hard-boiled egg contains less water than a raw egg does. Therefore, it takes longer to scramble. In fact, it usually takes about 10 minutes to fully cook a soft-boiled egg. Hard-boiling also causes the proteins within the shell to coagulate, making the egg harder to peel. For this reason, most recipes call for boiling eggs until the shells crack. Once the eggs reach room temperature, they should be peeled immediately.

Learn More:  How likely is it to get salmonella from raw eggs?

Scrambled eggs dry up quickly since they are really simply egg curds swirled about in a heated pan. In comparison to an omelette, they have a larger surface area exposed to heated air and a hot pan. And when you move them to expose additional curds, the older ones continue to cook until they are quite dry and chewy. Because it’s tough to create curds exactly how you want them, the secret is to accept that some will be undercooked.

In conclusion, I would say that both scrambled eggs and omelets are a breakfast staple. They each offer different benefits depending on what kind of meal you plan to make.

If you enjoy eating your food straight from the skillet, then scrambled eggs might be better suited for you. On the other hand, if you prefer having everything cooked separately, then an omelet could work best. I hope this article helped you with all your food curiosities.

Contents show
1 Scrambled eggs vs omelet
1.1 Scrambled eggs are to be stirred continuously
1.2 Omelettes are considerably better at retaining toppings.
1.3 Scrambled eggs have a tendency to dry out quickly.
1.4 Related Posts
Haley Schroeder

Cats love salty food. They also love water. Can they survive without either?Cats are obligate carnivores. This means they require meat or other animal flesh as their primary source of nutrition. Salt is essential for maintaining proper electrolyte balance in the body.Salt is necessary for life. Cats cannot live without salt. If you feed them…

What occurs when you swallow a piece of chewing gum? Chewing gums are usually composed of sugar, artificial sweeteners, flavoring agents, and coloring agents. Chewing gums are generally used to freshen breath, relieve soreness from toothaches, and help prevent cavities. However, if swallowed, they can lead to serious health problems such as stomach pain, vomiting,…

Coffee has become a part of our daily lives. Whether it’s at home or at the office, it’s always ready to serve us. But did you know that coffee goes bad after a certain period of time?Coffee beans contain oils that get rancid over time. This means they start smelling and tasting off. If you…

Do you ever wonder whether something is really bad for you? Or maybe you want to know if you should eat something because it’s bad for you? Do you think you need to spend hours reading labels before buying food? Well, there is no need to worry anymore! There are apps out there that can…

Dr Pepper is a popular soft drink that comes from the Dr Pepper company. It was created in 1885 by John S. Pemberton who invented the recipe using ingredients such as carbonated water, sugar, caffeine, caramel coloring, vanilla extract, and natural flavors. It is available in many different varieties and flavors, but the original flavor…

Bananas are delicious, nutritious, and versatile. But did you ever wonder whether they are flammable or dangerous? Bananas are considered one of the healthiest fruits in the world. They contain lots of potassium, fiber, vitamins B6 and C, folate, iron, magnesium, calcium, copper, manganese, phosphorus, zinc and vitamin E. Some people believe that bananas are…