You’ve probably heard the term smoke point before, but did you know what it means? The smoke point is the temperature at which oils or fats start to break down and release harmful chemicals into the air. This chart shows where cooking oils and fats begin to break down and emit dangerous fumes.

Cooking oil and fat are essential components of our daily meals. They are also very important for health reasons. For example, olive oil has high levels of antioxidants and monounsaturated fatty acids, which can reduce your risk of heart disease.

To ensure safety, follow these guidelines when using cooking oil and fats.

What Is Smoke Point?

Smoke points are the temperatures at which different types of oils and fats begin to emit potentially toxic gases.

When a food is cooked with an oil or fat that has a low smoke point, the oil breaks down and releases volatile organic compounds (VOCs) into the air. These VOCs can cause respiratory problems in people who eat them.

Cooking oils and fats are used in cooking for a variety of reasons. They add flavor, texture, and aroma to food. Some oils are solid at room temperature while others are liquid.

There are different types of cooking oils and fats including vegetable oil, olive oil, coconut oil, lard, butter, and tallow. Each type has its own characteristics and uses.

This chart shows the smoke point of each type of cooking oil and fat. It also includes information on how long each type of oil and fat should be cooked at high temperatures. The higher the smoke point is listed, the longer it will last when heated. This means that you can use these oils or fats without worrying about them burning up before they reach their full potential as flavoring agents.

Learn More:  Is prosciutto safe to eat without cooking? 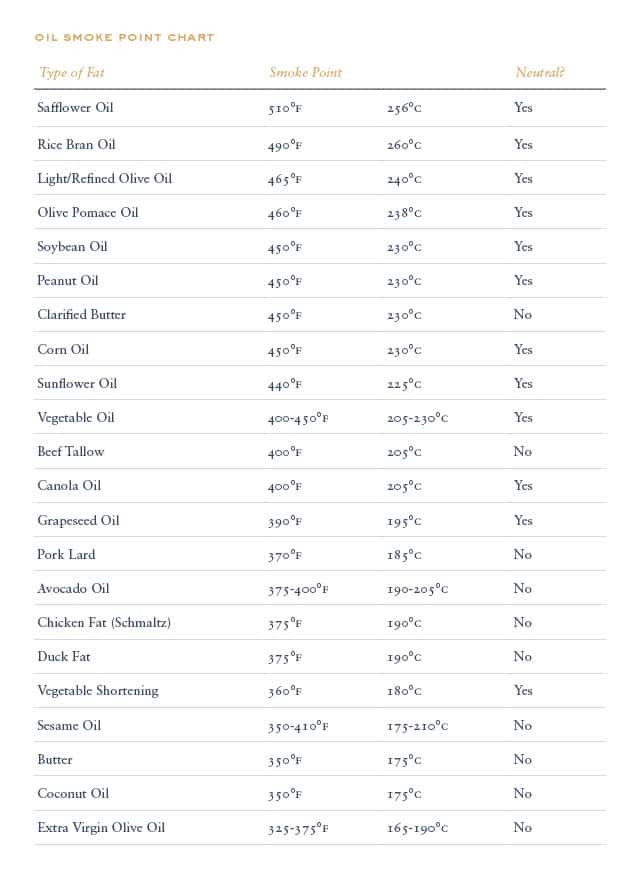 Vegetable oil is one of the most commonly used cooking oils because it’s inexpensive and easy to find.

Most people think of using this kind of oil only for frying foods like french fries and chicken nuggets. However, there are many other ways to cook with vegetable oil besides just deep-frying. You can saute vegetables in vegetable oil, make salad dressings with it, bake bread with it, and even stir fry some veggies in it.

In fact, studies show that eating 1 tablespoon of extra virgin olive oil per day lowers total cholesterol by 3 points and reduces triglycerides by 20 percent! That’s a lot of benefits for something we put into our mouths every single day.

Unlike other cooking oils, olive oil isn’t very stable once exposed to heat. So, while you can use olive oil for baking, roasting, grilling, and sautéing, you shouldn’t try heating it beyond 350°F/180°C. At those temperatures, olive oil starts breaking down and losing flavor.

If you want to keep your olive oil from turning rancid, store it away from light and air. Keep it refrigerated if possible. If not, then place it in an opaque container so that no light gets through. And don’t forget to shake it well before opening it.

Learn More:  Why put egg in ricotta cheese in lasagna?

Like olive oil, coconut oil doesn’t stay fresh forever. Once opened, it begins to go rancid quickly. To prevent this, buy small amounts of coconut oil and store it tightly sealed in the refrigerator.

You can also freeze leftover coconut oil in ice cube trays and transfer frozen cubes directly into plastic bags. Then pop out individual portions whenever needed.

Lard is similar to bacon grease in terms of both appearance and texture. Unlike bacon grease though, lard is solid rather than liquid.

Because of this, lard has a much lower smoking temperature than butter does. For example, lard melts around 300°F/150°C whereas butter stays soft until it reaches 375°F/190°C.

What Does “Smoke Point” Mean?

When talking about smoke points, most people assume that higher numbers mean better quality. This couldn’t be further from the truth. The term "smoke point" actually refers to how hot a particular type of oil will start burning when heated over high heat. It’s important to know what these different types of smoke points really mean because they affect how long certain foods should remain on the stovetop or grill.

Learn More:  How to preserve nutrients while cooking?

For instance, peanut oil has a low smoke point. You wouldn’t cook with it at all since it would begin to break down too soon. On the flip side, avocado oil has a relatively high smoke point. Because of its stability, you could safely fry up some eggs using avocado oil without worrying about them getting burned.

But there are two exceptions to this rule. First, coconut oil has a very high smoke point. Second, olive oil has one of the lowest smoke points among common cooking oils. That means you’d probably get the best results by frying food in olive oil instead of any other kind.

As we’ve seen, each type of oil has unique qualities. Some are great for baking while others work best for deep frying. Knowing what those differences are can make a big difference in the way you prepare meals. So take note of the information above and use it wisely!

Spinach is a leafy green vegetable that has been around since ancient times. It is rich in nutrients such as vitamin A, C, K, E, iron, and calcium. Spinach is also a source of protein and fiber. It is an excellent source of folate, magnesium, manganese, phosphorus, potassium, riboflavin, thiamine, zinc, copper, niacin, pantothenic acid,…

If you ever wondered at what temperature vegetable oil boils, then you need to read this! I was recently asked this question in my Facebook group and I thought I would share my answer here. Vegetable oils are used in cooking because they add flavor and texture to food. However, if heated too high, they…

Eggo Waffles are a breakfast favorite that has become a staple at every restaurant around the country. They are delicious, nutritious, and low in calories. Can you really eat them frozen?Eggo Waffles are a great way to start your day. They are high in protein and fiber, and they contain no cholesterol or trans fat….

Pizza has become a staple food around the world. In fact, Americans eat over 100 pounds of pizza per person each year. But is pizza really good for us or should we be concerned about its health implications?Pizza is a great option for those who want something quick and convenient. It’s also very affordable, especially…

Adderall is a prescription drug that helps treat attention deficit hyperactivity disorder ADHD. Some people who take it also report feeling energized and alert. Can you drink coffee with Adlerall?In recent years, caffeine has become a hot topic, especially after studies explained that drinking four cups of coffee per day can increase your risk of…