What can I substitute for quick-cooking tapioca?

We can have several substituted products for quick-cooking tapioca that include cornstarch, cassava flour, potato starch, All-purpose flour, arrowroot, and rice flour.

Some of the near to perfect substituted products for quick-cooking tapioca are as follows:

Cornstarch is a great substitute for quick-cooking tapioca and is easily available in almost all places. It is one of the common ingredients which is sometimes already present in the kitchen or pantry.

Cornstarch is a gluten-free product that can be used for those recipes which require gluten-free flour in baking and cooking. It is much thicker in consistency as compared to quick-cooking tapioca. 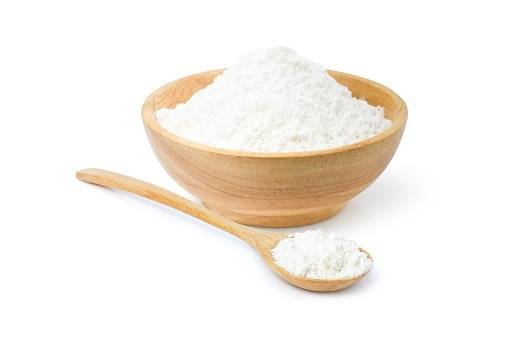 Cassava flour is another great substituted product for tapioca flour. Cassava flour consists of more fibre. Fibre makes a product enriched with dense nutrients. Cassava flour and quickly cooked tapioca both originated from plants. Quick-cooking tapioca is formed only from the starch part whereas cassava flour is from the whole root portion of the plant. 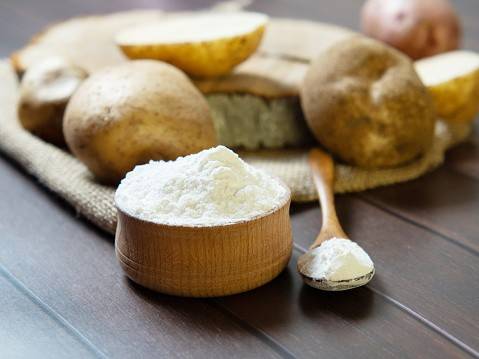 Potato starch is another gluten-free product that can be alternated with quick-cooking tapioca. This is a heavy consistency-containing product, which results in the formation of denser products. The consistency of potato starch is also dependent upon the nature of the recipes for which we are going to use it.

Potato starch can be replaced with the original product quick-cooking tapioca in a one-to-one ratio if we are making replacements in a small amount. More glass work is involved in those recipes such as baking mix, where a larger quantity of flour is being used to thicken the sauce or gravy.

It is recommended to take the quick-cooking tapioca in amount according to the recipes needed then try to reduce the tapioca flour by 25 to 50 per cent with potato starch along with a little bit of any other ingredient, these are all ingredients that will fulfil the total volume. 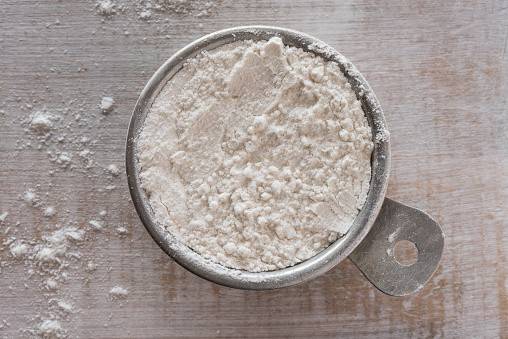 All-purpose flour is different in texture compared to quick-cooking tapioca. It can be used as a thickener in different recipes such as in gravy, soups, and other sauces.

All-purpose flour is a gluten-containing powder which is manufactured from wheat. So, if you are looking for a replacement that should be gluten-free, then try another substituted product for quick-cooking tapioca.

Learn More:  How to know if basil is spoiled? (6 easy ways)

Arrowroot is an ingredient that is a thickening agent and can also be a part of a baking mixture that also consists of flours and starches.

It also consists of a chew substance that activates when we use it alone as an ingredient in our recipes.

It is a perfect substitute if we use it along with other flour mixtures. Arrowroot is available both in markets and also online. 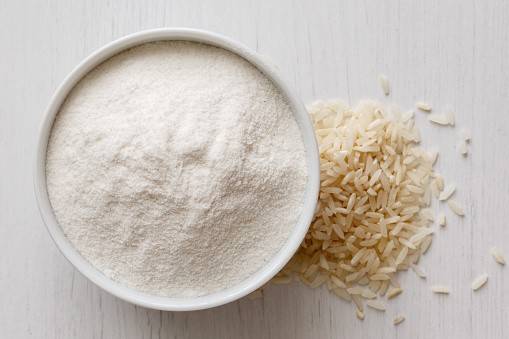 Rice flour is also one of the gluten-free products which is a perfect alternative product for quick-cooking tapioca flour. It is formed from grains of rice in a fine powder which is in a granule form.

We hope that the list above brought additional insight on what to substitute the next time you run out of quick-cooking tapioca. But, if you prefer the real thing, that is perfectly fine, too!

Tapioca is a starch derived from cassava root.
It has a long shelf life and cooks very quickly.
What else can you use instead of tapioca?
Tapioca is often used in desserts or other dishes where a thickening agent is needed.
The starch is also used in some soups and stews.
You can use arrowroot flour, cornstarch, potato starch, rice flour, or even cornmeal.
These ingredients are readily available at grocery stores and they cook similarly to tapioca

What can I substitute for quick-cooking tapioca?

Tapioca is used as a thickener in many dishes, especially desserts. It’s available in two forms: Instant tapioca and quick-cooking tapo­ca. Both types are made from cassava root, but only quick-cooking tapa­coca requires soaking before using. Quick-cooking tapiocas are usually sold in boxes or bags, while instant tapioca comes in powder form. To use either type of tapioca, simply mix it into hot liquid until dissolved. For recipes that call for instant tapioca, follow package directions. For recipes that call specifically for quick-cooking tappa­cia, follow these instructions instead: Place 1 cup of tapioca starch in a medium saucepan. Add enough cold water to cover the tapioca by about 2 inches. Heat the mixture over medium heat, stirring constantly, until it starts to boil. Reduce the heat to low and simmer, stirring occasionally, for 10 minutes. Remove the pan from the heat and let stand for 5 minutes. Stir the tapioca again, then pour it into a bowl and set aside to cool completely. Store any unused portion in an airtight container in the refrigerator for up to 3 months.

Tapioca starch is a thickening agent used in many Asian dishes. It’s usually found in powdered form, but it can also be bought in liquid form. Tapioca starch is derived from the cassava root Manihot esculenta, which grows in Africa, Asia, and South America. Cassava is a starchy vegetable that contains about 40% carbohydrates and 20% protein. Arrowroot Flour Answer: Arrowroot flour is a fine powder made from the roots and stems of the tropical plant Arunachal Pradesh. It’s used as a thickener in sauces and gravies. Arrowroot flour is available in natural food stores and online.

Learn More:  Can I substitute soy sauce for Tamari? (+5 substitutes)

Cassava flour is a fine powder that comes from the roots of the tropical plant Manihot esculentum. It’s used as an additive in baking and other recipes. Cassava flour is available in natural foods stores and online. Cornstarch Answer: Cornstarch is a white powder made from corn. It’s used as thickeners in sauces and gravies, and as a stabilizer in ice cream and frozen desserts. Cornstarch is available in natural foodstores and online.

Potato starch is a white powder made by extracting starch from potatoes. It’s used as a thickener in sauces and gravies. Potato starch is available in natural food stores and online. Gelatin Answer: Gelatin is derived from collagen, a protein found in animal bones, skin, tendons, ligaments, cartilage, and connective tissue. It’s used as binder in jellies, jams, marmalades, and gelatin desserts. Gelatin is available in natural food store and online.

All-purpose flour is a blend of wheat flour and other flours. It’s used to make breads, pastries, cookies, and crackers. All-purpose flour is available in natural foodstores and online. Cornstarch Answer: Cornstarch is a fine powder made from corn. It’s used as thickeners in soups, stews, sauces, gravies, and baked goods. Cornstarch is available in natural foodstore and online.

Arrowroot is a thickening agent made from arrowroot root. It’s used to thicken sauces, gravies, custards, and desserts. Arrowroot is available in natural food stores and online. Gelatin Answer: Gelatin is derived from collagen, which is found in animal bones, skin, tendons, ligaments, cartilage, and connective tissue. Gelatin is used to stabilize emulsions, such as salad dressings and ice cream. Gelatin is available in natural food store and online.

What is quick cooking tapioca?

What can be used as a substitute for quick cooking tapioca?

Tapioca flour is used in many dishes such as pudding, cake, breads, and other desserts. It is usually added to recipes because it helps to thicken sauces and soups. Tapioca flour is not only used in baking but also in making ice cream and other frozen treats. In addition, it is used in the production of gelatin dessert products.

Can I use tapioca flour instead of quick cooking tapioca?

Tapioca is a starchy root vegetable that is used in many dishes. It is usually found in powdered form and comes from cassava roots. Tapioca is available in two forms – quick cooking tapioca QCT and regular tapioca RCT. QCT is prepared by soaking the cassava root in hot water until soft. This process takes about 30 minutes. RCT requires no soaking and is cooked using a dry method. Both types of tapioca are used in making desserts such as pudding, ice cream, cake, and breads.

Learn More:  What can I substitute for harissa?

What can replace quick cooking tapioca?

Tapioca is a starchy root vegetable used in many dishes around the world. It is typically cooked by boiling until tender, then mashed into a thick porridge. In the Philippines, it is called kape pronounced "kahpe" and is usually served with meat or fish. Tapioca is sometimes confused with cassava, but cassava does not have the same properties.

What is the difference between quick cooking tapioca and regular tapioca?

Can you substitute tapioca flour for quick cooking tapioca?

Tapioca is a starchy root vegetable that is usually cooked using a stovetop method. It is a popular ingredient in desserts because of its light texture and ability to absorb liquid. However, if you are looking for something similar but not quite as sweet, try substituting it for cornstarch. Cornstarch is a white powder derived from corn and is widely used in baking. It is available in different forms such as flour, granules, and even paste. To replace tapioca, simply mix 1/4 cup of cornstarch with 2 cups of cold water. Bring the mixture to a boil, stirring constantly until thickened. This recipe works well for making pudding, pancakes, waffles, and other baked goods.

Tapioca is a starchy root vegetable that is used in many dishes. It is usually prepared by soaking the roots in hot water until soft, then adding sugar and stirring until dissolved. Tapioca is used in desserts, such as pudding, ice cream, and gelatin salad.

Breastfeeding is both natural and beneficial for babies. Breast milk contains nutrients that are essential for growth and development. Many mothers choose to nurse their children until they reach two years old. However, some women decide to stop breastfeeding before their baby turns two. This is because they don’t want to pump or bottle feed…

Butane lighters are great for camping trips or emergency situations. They also come in handy at home, especially during power outages. But how do you properly fill them?A butane lighter is a simple device that uses a pressurized gas cylinder to ignite a wick. The wick burns fuel from a reservoir, which creates enough heat…

Quark is a protein found in milk, cheese, eggs, and other dairy products. Quark is also used in some baked goods such as cakes and cookies. In the U.S., quark is often used as a filler or binder in ice cream and frozen desserts What can I substitute for quark? Quark is a soft cheese…

Yeast is a common ingredient in bread baking. But some bakers say it should never go above 120 degrees Fahrenheit 49 degrees Celsius. Is this true?Bread baking is a science. The temperature at which yeast rises depends on several factors, such as the type of flour being used and the amount of water added. If…

There are several Chinese rice brands out there, but they are all not equally good. If you are looking for the best brand, then you should consider these factors before choosing a particular brand. Chinese rice has always been a household name in China, even though its market share in other countries is quite low….