Paneer cheese is a type of Indian cheese that is made from curdled milk. It is often used in Indian dishes such as biryani, dal makhani, and korma. Paneer cheese is also commonly used in desserts and snacks.

Paneer cheese has a mild flavor and is usually eaten plain. However, it can be flavored with spices such as cumin, coriander, turmeric, and garam masala.

Paneer is a fresh, non-melting, unsalted white cheese that is popular in India and neighboring countries and is a staple in many Indian cuisines.

Paneer does not require any culturing or maturing (ripening), making it incredibly simple to prepare at home. It’s not only simple to use and prepare, but it’s also quite adaptable, making it a perennial favorite on the Indian subcontinent. What does Paneer cheese taste like, though? We’re here to answer this question and to teach you everything there is to know about Paneer cheese.

What is Paneer cheese?

The word paneer means "cottage" in Hindi. This refers to its small size and soft texture. The name comes from the fact that paneer was traditionally prepared by cottage dairy farmers who would make their own cheese using raw cow’s milk. In modern times, however, most paneer is now produced industrially. 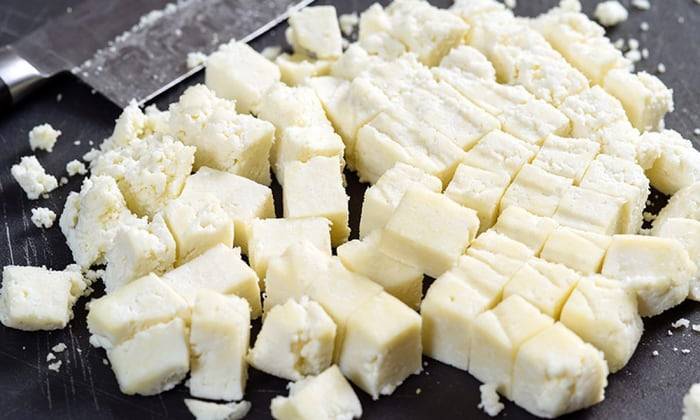 In the Indian subcontinent, paneer cheese is historically produced from buffalo milk, particularly in northern India, Pakistan, Bangladesh, Nepal, and Afghanistan. However, most Paneer cheese makers currently utilize a combination of buffalo and cow milk, or even 100% cow milk, which results in a somewhat different texture and reduced fat content.

The name "Paneer" is said to be derived from the Persian and Turkish term peynir, which means "cheese." This is why it’s thought that Paneer was developed in the 16th century by Persian and Afghan colonial rulers in north India. To avoid using rennet, Paneer cheese is created by separating the whey from the curds with an acidic substance such as lemon juice, although it can also be prepared with vinegar, citric acid, yogurt, or even heated milk.

The Portuguese are thought to have brought this technique to Bengal in the 17th century. The curds are then strained before being molded into a big block and sliced into the familiar cube-shaped Paneer. Paneer cheese does not melt and, as previously stated, does not require a starting culture.

Panela, Ricotta, Fresh Mozzarella, unsalted Feta, and Queso Fresco are examples of white, fresh cheeses with similar flavors. Paneer is mild and unsalted, or just utilizes a little amount of salt. Paneer is utilized in East Asian cuisine (Chinese, Japanese) in a similar fashion to tofu in that it is a neutral-flavored protein that can blend into diverse taste profiles while improving the overall flavor. Paneer, on the other hand, is far more calorically dense than tofu, with a thicker texture and significantly more fat.

The texture of Paneer cheese varies depending on how it is prepared and cooked. Paneer is most commonly served fried in cubes, which, when cooked properly, may taste like delicate chicken. Although cubes are the most popular form of Paneer, they may also be crumbled over a meal (similar to Parmesan) or eaten fresh. Paneer cheese is frequently served as a snack with mint and/or cumin to complement its moderate saltiness.

Paneer is a curdled milk dish from India. It’s generally accompanied by rice and other side dishes. Paneer cheese, on the other hand, is used in a variety of dishes.

This Greek cheese has a similar texture to paneer. Both hard and soft halloumi kinds of cheese are available. When heated, the latter quickly melts. Whenever feasible, use halloumi cheese instead of paneer cheese.

It’s delicious on its own and goes well with salads. Spices like cumin powder, turmeric, chili pepper flakes, garlic, ginger, and others can be used to make the dish more substantial. Halloumi has been prized in Cyprus for centuries and has gained international acclaim because of its ability to be grilled and fried without losing its structure, making it akin to paneer once more.

The fact that feta cheese includes salt is the major reason for its popularity. By inhibiting the growth of germs, salt aids in the preservation of foods. When feta cheese is mixed with olive oil, it turns creamy and delicious.

Paneer cheese is widely available in Indian stores. It’s usually served with rice dishes like dal makhani or biryani. Panela cheese, which is manufactured from pasteurized cow’s milk, is a good paneer substitute. Mexican panela softens but does not melt when cooked, comparable to paneer cheese. While Paneer is from India, Panela is from Mexico, and the two are almost identical in terms of use.

How to make Paneer at home?

Making paneer cheese at home is easy. You will need: 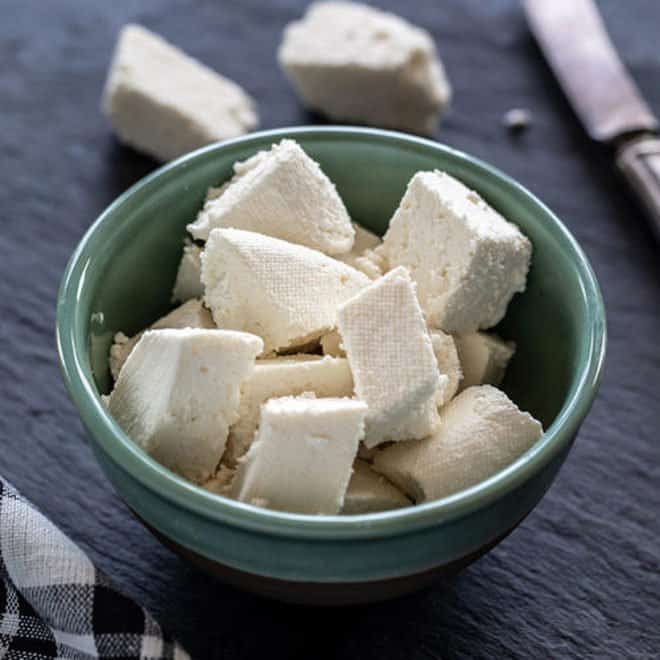 1. Heat the milk until it reaches 180 degrees Fahrenheit. Add the nonfat dry milk and stir continuously until all lumps disappear. The mixture should look smooth and homogenous.

Learn More:  Can You Eat Unripe Avocados? Here's What You Should Know!

2. Remove the pan from heat and add the lemon juice. Stir vigorously until the temperature falls below 100 degrees Fahrenheit. At this point, the curds have formed. Let stand undisturbed for 15 minutes.

3. Pour off any whey remaining in the container. Place the container back into the hot water bath. Continue heating the mixture until the temperature rises above 110 degrees Fahrenheit. Once again remove the pan from the heat source. Allow the curds to settle for 10-15 minutes before stirring them up. Repeat these steps three times.

4. After the third time, pour out the contents of the bowl through a colander lined with a muslin cloth. Tie the corners together and hang over a sink drain. Leave the bag hanging overnight. In the morning, cut open the bag and squeeze as much moisture out of the paneer as possible. If necessary, place the paneer between layers of paper towels and press down firmly. Store the paneer in an airtight container in the refrigerator.

5. Use the paneer within five days. For longer storage, freeze the paneer. Thaw froze paneer by placing it in warm water. Drain thoroughly before using.

6. Make sure to read our article about how to cook paneer properly!

In conclusion, we hope that you found this guide helpful and you got an idea of how paneer tastes which helped you with all your food curiosities.

Dried herbs are great for adding flavor to dishes, but they don’t always match up to their fresh counterparts. How much dried basil should I add to my recipe?Dried herbs are often cheaper than fresh ones, but they also lack some essential oils and nutrients. If you want to get the most out of your…

Gogurt has become a favorite snack food for kids and adults alike. It’s low in fat and sugar, and it’s even good for you. But did you know that some brands contain artificial ingredients? If you want to avoid them, read our guide to frozen yogurt alternatives.Frozen yogurt is a delicious treat that’s perfect for…

Olive oil has become the go-to cooking oil for health conscious consumers. But does olive oil really contain trans fats?Trans fat is a type of saturated fat found in processed foods such as margarine, cookies, crackers, and fried food. The Food and Drug Administration FDA has banned the production of artificial trans fats since 2006.But…

Are you fed up with the plastic smell from air fryers? If yes then you are not alone. The problem is that these devices are packed full of toxic chemicals. There is no way to get rid of the nasty smell. Air fryers are one of the best kitchen appliances that are widely used because…

Do you ever wonder how long cooked clams last in your refrigerator? Clams are delicious and nutritious but unfortunately they don’t keep very well. In fact, once opened, they only last about 3 days before spoiling. [Thesis/Solution] This video shows you how to store clams properly and how long they should stay fresh. Is my…