Most of us are familiar with pepperoni used in delicious cheese-filled pizzas, where it acts as a luscious pizza topping. Apart from pizzas, pepperonis are used as fillings in sandwiches, burgers, sizzlers, and various other Italian dishes.

Its crispy, salty, spicy, and smokey taste is one of a kind. As a result, it has topped the list of favorite pizza toppings time and again. 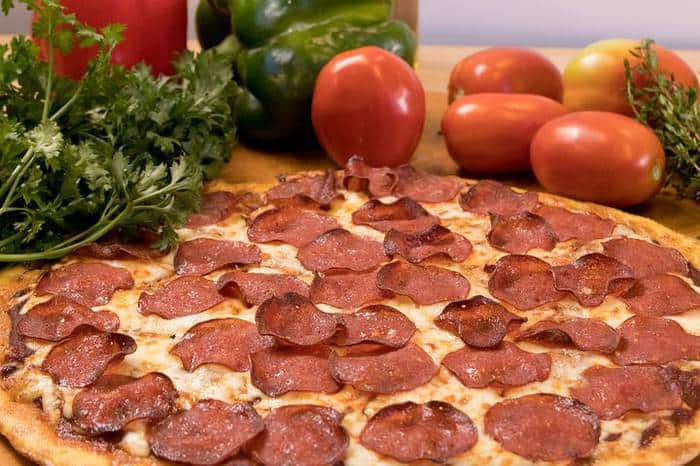 So, let’s do some pepperoni talking today! Sounds yummy?

Pepperoni is an American variant of sausages. It is minced pork and beef minced and blended really well with some paprika and chili flakes. It is then cured with a mixture of salt and sodium nitrate to prevent the growth of any microorganisms. It has a characteristic soft, smokey smell and a bright red color. Thin slices of pepperoni are a must-have in any American lunch. 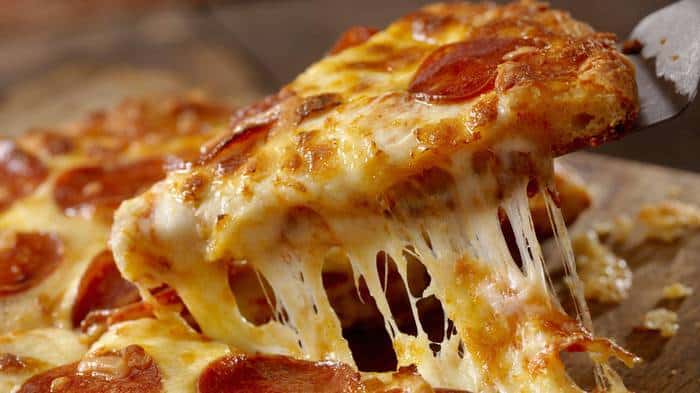 Now, let us have a little sneak peek at how pepperoni originated

Pepperoni comes from peperoni, the plural of peperone, which is the Italian name for bell pepper. Interestingly, though most of us think that pepperoni came from Italy, it actually originated in America to meet the high demands of sausages. That is why it is also often referred to as the American variety of salami.

Difference between pepperoni and salami

Salami is a common name given to all kinds of cured meat, whereas pepperoni refers to a specific type of salami. Cured meats gained popularity in ancient times because of their easy preservation when people did not have access to refrigerators.

Pepperoni is spicier than salami and has a fine-grained texture as compared to the chunky textures of salami. Pepperoni contains spices like chili, garlic, cayenne pepper, and other spices that give it an extra kick of flavors.

On the other hand, salami is more versatile than pepperoni. It can be used in cold and hot dishes but pepperoni is mostly used in pizzas. 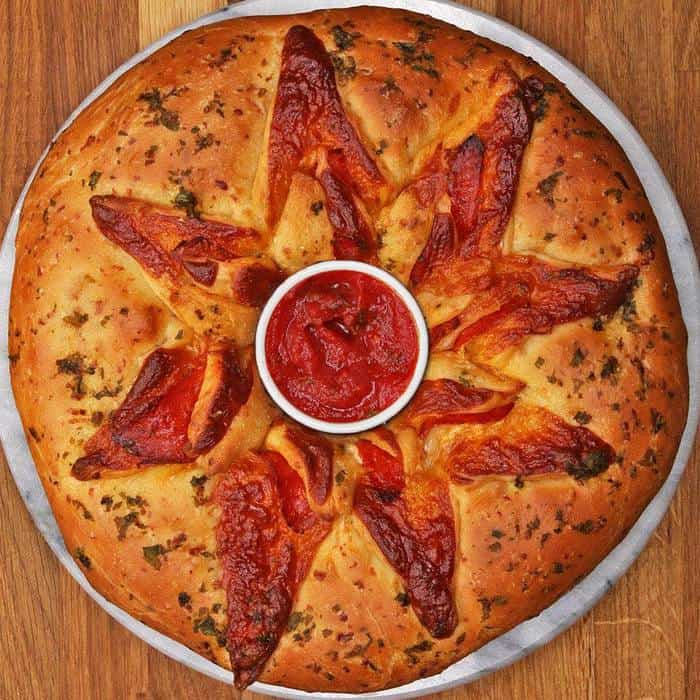 How to use pepperoni

Apart from serving it as a delicious pizza topping, pepperoni can also be used as an ingredient in cheeses boards or antipasto platters. They are a fabulous complement to quesadillas and grilled cheese sandwiches. Grated pepperoni can also be served as a topping for baked potatoes, pasta salads, and a garnish for soups. Use pepperoni in casseroles, omelets, cheese plates, and bread to give them an enhanced flavor.

Pepperoni has a salty spicy taste because of its curing process, where salt and lactic acid are used to preserve it for a long time. The lactic acid adds a tangy flavor to it. Due to its distinct chewy texture, you can achieve the perfect thin slices. The paprika and garlic powder used in its preparation gives it a red hot color and spicy flavor.

Each ounce of pepperoni provides 5.4 grams of protein. However, it must be consumed cautiously. It contains a high amount of calories, fat, cholesterol, and sodium that can affect your health.

Where can you purchase pepperoni?

Pepperoni is available in whole sticks at any nearby grocery store, in the meat and deli section. You can also purchase them from any meat shops, butcher shops, and delicatessens. Sliced pepperoni comes in plastic packages on the regular grocery shelves. As they are already cured, they do not require refrigeration. 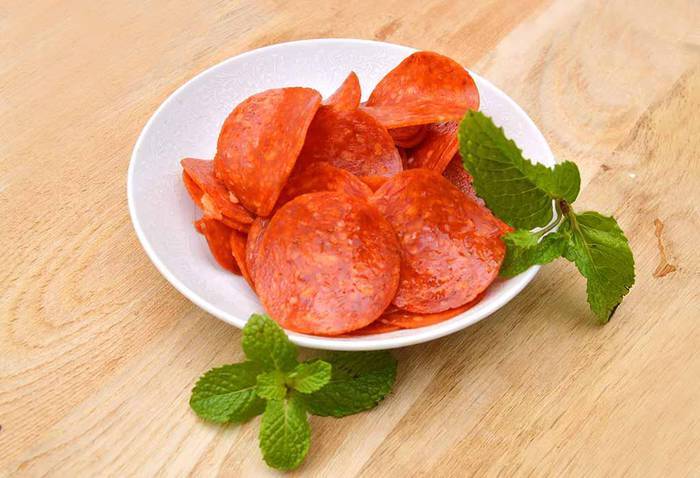 How to store pepperoni? Can you freeze it?

Being a cured meat, pepperoni doesn’t need refrigeration. To make it easier for grating, you can store them in your refrigerator. Freezing it also extends its shelf life. You can freeze them as it is, or slice them and store them in air-tight containers. It will stay fresh for up to 6 weeks in the refrigerator and up to 8 months in the freezer. The only drawback is the fat content in pepperoni can turn rancid if exposed to heat, light, or oxygen.

Having answered some related queries about pepperoni, let’s move on to the most awaited question.

What are the ingredients present in pepperoni? How is it prepared?

The ingredients in pepperoni are a combination of certain minced meat, blended with some spices to give it an exotic taste. But the whole process is quite tedious and takes a lot of time and effort to fully cure, ferment, and dry.

Learn More:  Can you freeze pepperoni?

Like any sausage or salami is prepared, pepperoni also contains finely ground or chopped meat. Some varieties may contain a coarser grind but traditionally fine grind is mostly preferred.

In the combinations of meat, pork and beef are used in different proportions. It usually contains a higher amount of beef meat and pork fat. The meat is then mixed really well with other spices and is kept at an optimum temperature where the meat can extract the flavors of other spices and develop a nice flavor. Generally, they are kept at a low temperature, which is a good way to preserve the fat content of the meat.

The spices added are paprika and chili

A very crucial aspect of pepperoni is the spices. These spices make the pepperoni more lively and give it a characteristic color.

Paprika powder is bright red in color, which gives pepperoni that spicy and a slightly sweet tone. Paprika is a popular ingredient in many European sausages and salamis.

The chili powder, which is also bright red imparts a hot and salty taste. This is responsible for binding all the ingredients together. There are other ingredients too, used in the curing process, and sometimes peppercorns are also incorporated in the mixture. 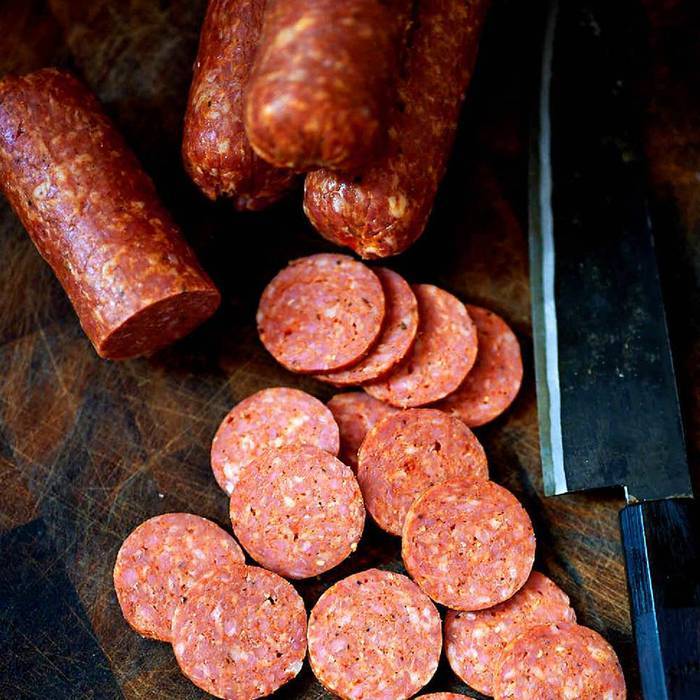 The process of preparing pepperoni is simple, but it requires a lot of time, detailing, and efficiency. The raw meat needs to be very well cured and fermented to avoid the growth of any microorganism causing food poisoning.

At first, the finely chopped and ground meat is combined with the seasonings – chili, paprika, salt, curing salt. A starter culture is then added to it as it is a fermented sausage or salami. After fermenting the meat mixture for several days in a controlled, warm environment, it is fed into casings.

To boost its production process and meet the high demands of pepperoni, artificial casings are used. This casing is usually made of cellulose or collagen. Cellulose and collagen casings are cost-efficient and easier to operate, providing meat protection as well.

Learn More:  Why Is Bacon Salty Heres Why, And How To Remove Some Salt

After several months of drying and curing them in a low-temperature room, the moisture present in them evaporates. The meat becomes properly cured and safe to consume. In this step, the unwanted bacteria and other microorganisms are eradicated.

The curing process needs to be monitored by a trained worker from time to time. The optimum temperature needs to be maintained throughout the process.

So, this is how your favorite salami gets prepared.

Contents show
1 What is pepperoni?
2 Now, let us have a little sneak peek at how pepperoni originated
3 Difference between pepperoni and salami
4 How to use pepperoni
5 What does pepperoni taste like?
6 Nutritional benefits of pepperoni
7 Where can you purchase pepperoni?
8 How to store pepperoni? Can you freeze it?
9 What are the ingredients present in pepperoni? How is it prepared?
9.1 Pepperoni contains finely chopped pork and beef
9.2 The spices added are paprika and chili
10 Now let us move on to the steps involved in its preparation
10.1 Related Posts
Haley Schroeder

Did you know that canned beans are often loaded with preservatives? They are also full of sodium and other additives that aren’t good for you. If you want to save time and money, try cooking them from scratch instead.Canned beans are convenient because they come pre-cooked and ready to eat. However, they are often loaded…

Did you know that integrating fresh herbs into your recipes will enhance and alter your dishes? They give a depth of flavor to your cuisine that no other sort of food can match. Countless distinct herbs, such as parsley, thyme, and oregano, are utilized in various sorts of cuisines across the globe. One of the…

Are you looking for ways to save time and money at home? If yes, then cooking frozen meat might be a good option for you. Frozen pork has become very popular because of its convenience.Frozen food is convenient and saves a lot of time. There are several benefits of freezing meat such as preserving freshness,…

Eggs are a staple food in our daily meals. They are also very nutritious and versatile. However, they are prone to spoilage. How long does an egg last after cooking? Is it safe to eat them even after 3 days? What should you look out for?Eggs are often stored at room temperature or refrigerated. The…

Are cilantro flowers edible? Yes, they are. They taste great and look beautiful too. If you want to eat them, you should wash them well before consuming them. Cilantro (Coriandrum sativum) is a herbaceous plant belonging to the family Apiaceous. The leaves and stems are commonly eaten as a vegetable or added to salads. In…

Eating fruits and vegetables can get monotonous if we don’t try new, different things. Luckily, there are many delicious fruits and vegetables available to add a splash of variety to your usual diet. One such unusual fruit with an eye-catching shape, colour and mouth-watering flavour is starfruit. Upon slicing this gorgeous fruit, it looks like…