The capsicum family includes bell peppers. They are frequently used in cooking and may also be consumed raw. Green, red, yellow, orange, purple, and white bell peppers are the most frequent.

They are a popular vegetable because they are versatile and nutritious. They contain vitamins A, C, and K, folate, potassium, magnesium, fiber, iron, copper, manganese, phosphorus, protein, vitamin B6, niacin, riboflavin, thiamine, and zinc. The nutritional value of these vegetables is very important to your health. If you want to eat healthily, it’s best that you choose foods with high nutrient content like those found in bell peppers.

If you’ve ever been to the grocery store, you’ve undoubtedly seen the rainbow of hues that bell peppers can produce. You may buy dozens of your preferred hues of bell pepper or buy them in colorful sets. But why are there so many distinct hues of bell peppers? Is there any significance to this in terms of taste? Is there a difference between the peppers or are they all the same? Let’s take a closer look.

Why are bell peppers different colors?

The color of bell peppers comes from their pigment called carotenoids. These pigments give the fruit its vibrant hue. 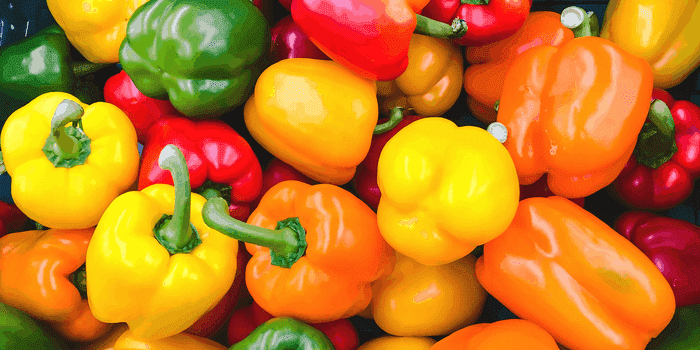 There are two main groups of carotenoid compounds: xanthophylls and lutein/zeaxanthin. Lutein and zeaxanthin have antioxidant properties which help protect against cancer and heart disease. Xanthophylls do not have as much protective power but still provide some benefits for eye health.

Because bell peppers are sold at different stages of ripeness, they appear in a range of colors. This means that the color of a bell pepper varies as it matures, from green to yellow to orange to red. As long as they are large and ripe enough, they can be consumed at any stage of growth. This is why they come in a variety of colors: they’re all at different stages of development!

The green, yellow, and red type of bell pepper, also known as the Gross cultivar, is the most prevalent. They begin green and become crimson as they mature. They aren’t quite as tasty as Kapia peppers, which are deep red and elongated. Depending on how ripe they are, bell peppers appear in a range of colors.

White and purple bell peppers are the product of selective breeding. White bell peppers, for example, are a light greenish-yellow color rather than entirely white. As a result, they produce relatively little beta-carotene and have a colorless appearance. 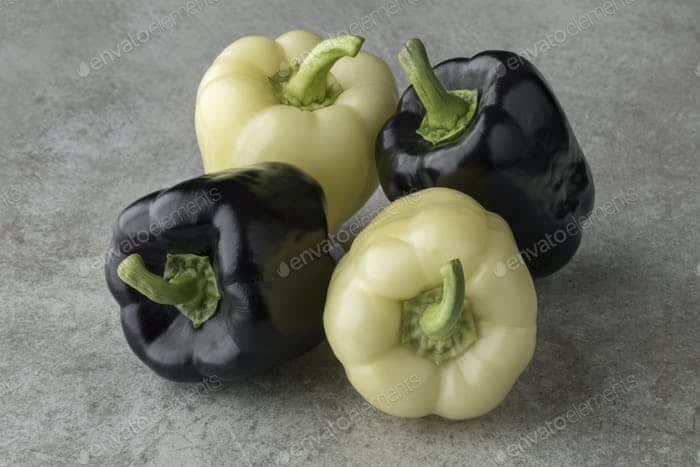 White and purple bell peppers are generally grown only commercially. There isn’t really a market for them outside of specialty stores. Because they lack the bright coloration associated with regular bell peppers, they are usually sold by weight instead of volume.

Does the color of a bell pepper matter?

Yes, The color of your bell pepper can affect both taste and nutritional value. For instance, red bell peppers contain higher levels of vitamin C compared to green or yellow ones. On top of this, they offer additional antioxidants such as lycopene and capsaicin.

Capsaicin is a pain reliever and anti-inflammatory. It also helps to reduce cholesterol and blood pressure. Lycopene aids in the protection of cells against free radical damage. The sweeter the bell pepper, the more vibrant it is. As a result, a yellow one is sweeter and less bitter than a green one, while an orange one is much sweeter. Finally, the sweetest of all the peppers is the red bell pepper. It may be as sweet as a carrot in certain circumstances, and it will surely render the remainder of the dish a golden-orange hue.

This indicates that it is a good color to include a red bell pepper in a stew, gravel, or other meal. Human beings, when it comes to food, like a yellow-red-gold brown color.

Why green bell peppers are inexpensive?

Green bell peppers have been around longer than any other kind. They were first cultivated during the 16th century. This means that they’ve had plenty of time to develop into what they are today. 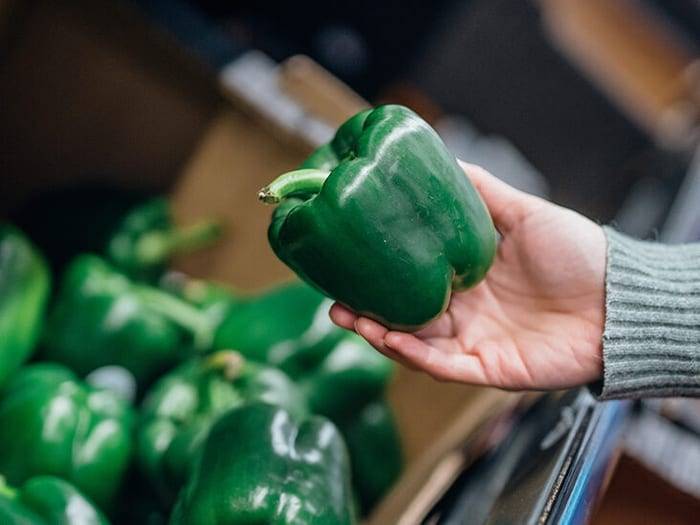 As a result, they’re reasonably priced. They’re available all year at supermarket shops. Buy these bell peppers early in the season, before they become too huge, to save money. Green peppers are the cheapest of the bunch since they may be plucked sooner than the other colors. As a consequence, production may move more quickly, and more items can be sold.

Fully red bell peppers, on the other hand, are more expensive due to their lengthier time on the vine to mature. Customers prefer them because they are sweeter. To be honest, the price difference between fully ripe and green bell peppers isn’t that significant, and you can generally purchase a three-pack of different colors for a reasonable price.

In conclusion, there are many reasons why people choose different colored bell peppers over others. However, if you don’t mind spending extra cash, then go ahead and pick up those colorful beauties.

I hope this article made things clear about the colors of bell peppers and helped you with all your food curiosities.

Malibu Rum has been around since 1879. How does it stay fresh for so long? Malibu Rum is a brand of rum produced by Bacardi Limited. It was first introduced in the United States in 1879. Since then, it has become one of the world’s leading brands of rum. 1Rum is distilled from sugarcane juice….

Pressure cookers are great kitchen tools that allow you to prepare food faster and healthier. They also save time and energy because they reduce the amount of water needed to boil or steam foods.Pressure cookers come in various sizes and models. The smaller ones are ideal for cooking individual portions of food such as soups,…

Do you ever wonder if certain kitchenware can be cleaned in the dishwasher? Kitchenware is often used for cooking and cleaning. Some items such as pots and pans are designed to withstand high temperatures while others are meant to be washed by hand. In this blogpost I’m going to explain you how to clean your…

What is the optimum temperature to store the tiramisu in the fridge? Tiramisu is a dessert consisting of ladyfingers soaked in coffee liquor and layered with mascarpone cheese and chocolate shavings. It is traditionally served chilled. Tiramisu is usually stored in the refrigerator for several hours to chill properly. However, if you want to serve…

Rotisserie chicken has become a staple food item in our homes. The convenience of having pre-cooked meat ready to eat makes it a great choice for busy families. But how long does rotisserie chicken last?A rotisserie chicken is cooked using a rotating spit over a fire or other heat source. This method of cooking ensures…