Bacon is one of many delicious foods that you may eat for breakfast all around the world. Bacon is salt-cured pork from the belly or rear of the pig. 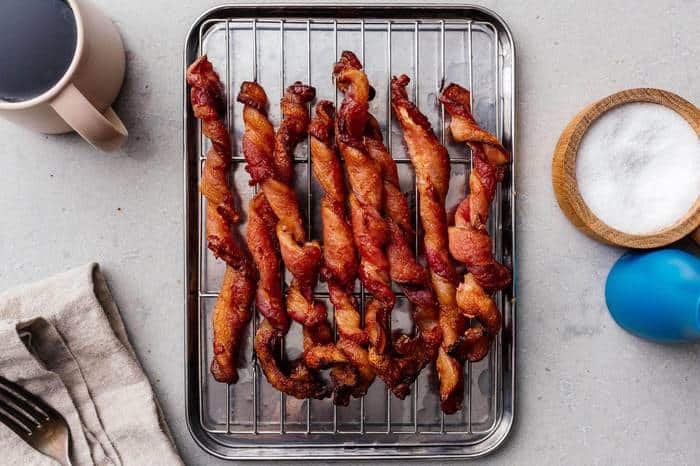 This excellent food item is really good, and it is consumed in big quantities by people all over the world. It can be served on its own or combined with other dishes. Bacon is used in a variety of dishes, including sandwiches, soups, and salads. Many individuals have no idea what Bacon is, but those that do share a common skepticism. A question that comes to many people is why is bacon salty and what can we do to remove some salt from it? Bacon is loved because it can help in improving many dishes.

Contents hide
1 What is a Bacon?
2 Why is Bacon Salty?
2.1 Bacon gets bribed or dry-packed in salt while being manufactured
2.2 Salt prevents the growth and spread of bacteria
3 What if the bacon I have is extremely salty?
3.1 Uncooked Bacon
3.2 Cooked Bacon
4 Is pork naturally salty?
5 How to select less salty bacon?
6 What is Lean Bacon?
7 Do you need oil for cooking Bacon?
7.1 Related Posts:

What is a Bacon?

Bacon from the side of the hog is the most prevalent kind used in the United States. This is acquired by slicing the pig’s side. Bacon is fatty meat with lengthy fat layers. 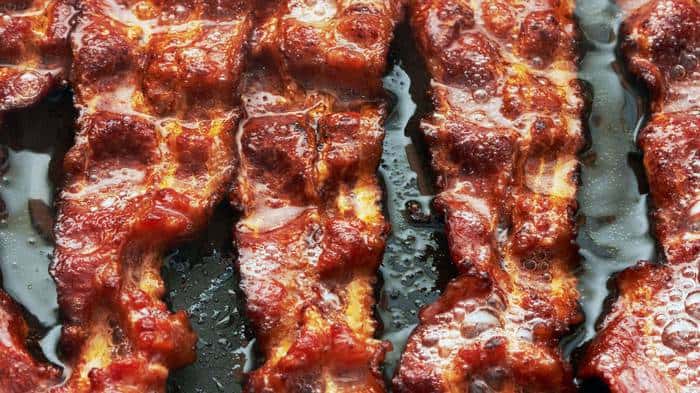 Meanwhile, the most prevalent variety of Bacon in the United Kingdom is Back Bacon. It originates from the pig’s middle back. Its structure is similar to that of ham. It’s customary to cure and smoke meat at home before preparing it. The flavor originates from the crispy and tender fat in bacon. Bacon requires a high fat-to-meat ratio, often between half and two-thirds fat to meat.

When bacon is cooked, much of the fats are extracted and can be drained out if necessary. Bacon should never be cooked at high temperatures for an extended period because the nitrite curing agents will be converted to nitrosamine by the high heat.

Why is Bacon Salty?

The main reason behind bacon being so salty is the process used for its manufacturing. Bacon is brined or dry-packed in salt. This tends to result in moisture being drawn out from the meat. 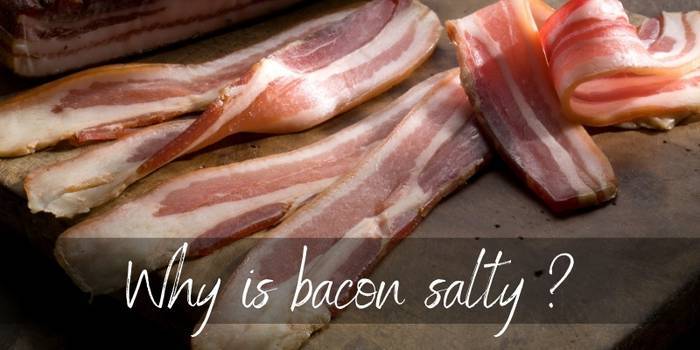 When the moisture is drawn out the meat becomes a hostile environment for bacteria and fungi growth. Low moisture also means that it will take less time to cook. The side of the bacon is both tasty and salty. Once the bacon is placed on the frying pan, the moisture starts evaporating and this simply leaves the equal amount of salt back. You might have noticed that crispy bacon is likely to be saltier than fresh bacon.

See also  are cilantro flowers edible , here's what we found out

Bacon gets bribed or dry-packed in salt while being manufactured

Bacon is based on the time-tested procedure of curing and bringing of the meat. This was the process used in ancient times to preserve meat for a long time.

However, it’s not necessary now but still, people tend to love the flavor. This is the main reason why bacon is packed in brine which is in reality very salty water that may contain herbs or it is dry packed in salt (for eg. The original corned beef). This method leads to a large amount of salt entering the bacon and moisture being drawn out. Brined bacon still has a lot of moisture compared to dry-packed bacon but it’s still very less compared to fresh ones. Dry-packed bacon can lose up to 30% of its original volume.

Salt prevents the growth and spread of bacteria

The main reason why bacon is brined or dry-packed instead of trying something else or any other method is to draw out moisture. You need to understand that moisture can lead to bacteria and mold spores growth.

Less moisture is always better as it can prevent this. If there’s less moisture then it simply means that the chance of bacteria growth is also less. This is the main reason why dry and salted meat tends to stay for a long time and fresh meat doesn’t. When the meat gets cured, it is not counted as fresh meat, it becomes aged, dehydrated, and salted.

What if the bacon I have is extremely salty?

If you have bacon that is too salty and you are finding a way to remove some salt then we will look at it but let me tell you that the taste might get a little affected and you may or may not lose some flavors. 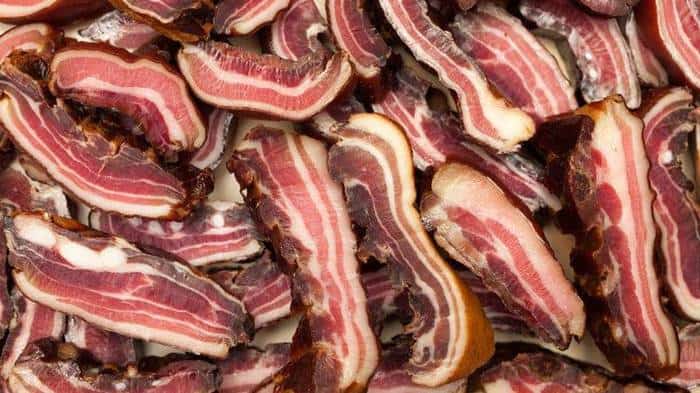 In case the uncooked bacon you have contains a lot of salt then you can try reducing it by reverse brining. All you need to do is get a lot of water which means enough water to hold all the bacon.

If your bacon is still salty then discard the water and add fresh water and then repeat the process for 2 hours again. You need to keep repeating this until you find that your bacon is not too salty but keep in mind that the more the bacon gets sold it will lose flavors so find a middle ground.

See also  How to remove burnt sugar from the stovetop? (5 Methods)

After you are done and you are thinking of cooking this soaked bacon, you will have to make sure that the bacon is completely dry before putting it on a frying pan.

If you have cooked bacon that is too salty then this can be a big issue. It can be difficult to remove salt from it, and it isn’t too great to do so. Still, let’s see what we have got.

You can try using heavy cream for cooked and salty bacon. If your recipe is good with cream then you can use the cream to mask the salty taste but you won’t be able to remove it. You can also try adding some mashed potatoes or bread crumbs only if the recipe you are making allows it.

When we talk about pork then it is not as salty as bacon is. Bacon is very salty and the main reason is the way it is manufactured. It is dry packed in salt to remove the moisture making it salty. 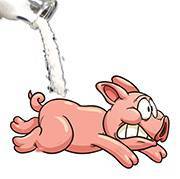 Pork meat is not salty when it’s raw. When we talk about raw meats, they all have a small amount of sodium content in them like beef, chicken, and turkey. This simply depends on how animals were fed. When the bacon is fresh and raw, it’s not as salty as it gets after manufacturing.

How to select less salty bacon?

How well bacon salt masks are a poor product is the greatest worry. Your tongue will be overwhelmed by the salt and smoky flavor of a cheap slab of bacon. This is the one thing everyone should try to avoid. There’s no way anyone can tell how salty the bacon is just by looking at it so if you want to know then you will have to pick up the packet and look at the amount of sodium content mentioned on them. If the sodium content is lower then the bacon will be less salty and vice versa.

What is Lean Bacon?

There is enough fat in American and British bacon, which is more than enough to cook bacon, therefore there is no need to add any more oil. You won’t be able to locate any bacon without fat, therefore no matter how little of it there is, it will be plenty to cook that bacon. This simply means you won’t need to use any of your kitchen’s oil.

See also  Can you mix bacon grease and vegetable oil?

However, there’s a chance your back-on doesn’t have enough fat to fry your bacon, so don’t be concerned before adding oil; all you have to remember is not to add too much and your bacon shouldn’t stick. You may use a few drops.

You may have bacon with less fat, bacon with no fat or fat removed, or bacon with cuts closer to the bone, and in these circumstances, there may or may not be enough fat to assist you to cook the bacon; in such scenarios, you may add some extra oil and it will not be a problem. To keep the taste, neutral oil should be used instead of olive oil.

Do you need oil for cooking Bacon?

Bacon can cook on its fat, which is something to be aware of. It makes no sense to add extra oil to bacon, and as a result, oil should never be added to bacon.

The fat in the bacon tends to melt in the pan and cook the bacon. If you like eggs and want to add some taste to them, try frying eggs in the melted fat. Many people love their bacon baked, and even if you do, you shouldn’t use any oil because it isn’t necessary. You should choose an appropriate saucepan to cook the bacon in, whether you are frying or baking it because you will be left with a lot of liquid fat.

If you’re frying a lot of bacon, avoid using a small skillet or pot since it will eventually spillover.

Bacon is popular throughout the world and can be found in nearly every kitchen. It can be eaten or used as an ingredient in a dish.

Bacon tends to be salty because of the technique that is used to manufacture it. The sodium helps to prevent moisture and to keep it for a long time. If you have extra salty bacon and you want to remove some salt then I have mentioned some of the things you can try. I hope this article was useful and relevant.

Have you ever heard about a Dragon fruit? Don’t be scared… It’s just the name of a fruit. LOL. You might wonder why it is named dragon fruit? But you know, English is a funny language. Well jokes apart, it is named so, because of the fire-like flower that grows from the fruit. Now those…

Pitaya or Pitahaya or Dragon Fruit or Strawberry Pear? Okay,Is this really a name of fruit? Dragon? I am scared. I am the kind of person who wants to taste every possible thing in this world.C’mon people we got one life (just one)and we have to live it to the fullest. Now,I made a bucket…

Mustard is an essential ingredient in many dishes. It adds flavor and texture to foods. It also has health benefits. Mustard contains antioxidants and other nutrients that promote heart health. There are different types of mustard. Some are spicy while others are sweet. They can be used in salads, sandwiches, soups, sauces, and even desserts….

Sushi is a Japanese dish that has become popular in the United States. It’s made of raw fish, usually served with rice and other ingredients like wasabi or soy sauce. But how do you know if your sushi is cooked to perfection? And what temperature should it be eaten at? We asked two experts for…