Chicken skin is a term used to describe the outer layer of the chicken’s skin. It is also known as the cuticle. The cuticle is the first line of defense against bacteria and other pathogens.

For many people, chicken appears to be the preferred meat. It’s light in comparison to beef, it appeals to the majority of people, and it produces the finest soup ever. The majority of the time, especially if it’s chicken breast, you’ll get chicken flesh that has already had the bones and skin removed.

You can get a whole chicken or skin-on chicken on rare occasions.

You could come across the yellow-skinned chicken under specific conditions. The fat and meat are occasionally yellow-tinged. Why is the chicken’s skin yellow? It’s the chicken’s overall skin, as well as the skin on its knees and legs, that we’re talking about.

Contents show
1 Why is chicken skin yellow?
1.1 The chicken feed may contain corn and grass
1.2 Why chicken are fed corn
1.3 The grey junglefowl’s genes
2 Farm-raised, healthy chickens had a yellow tinge to their skin
2.1 Related Posts

Why is chicken skin yellow?

There are two reasons why chicken skin can appear yellow: one reason is that there was too little exposure to oxygen during processing; another reason is due to an accumulation of iron oxide pigments within the muscle tissue itself. 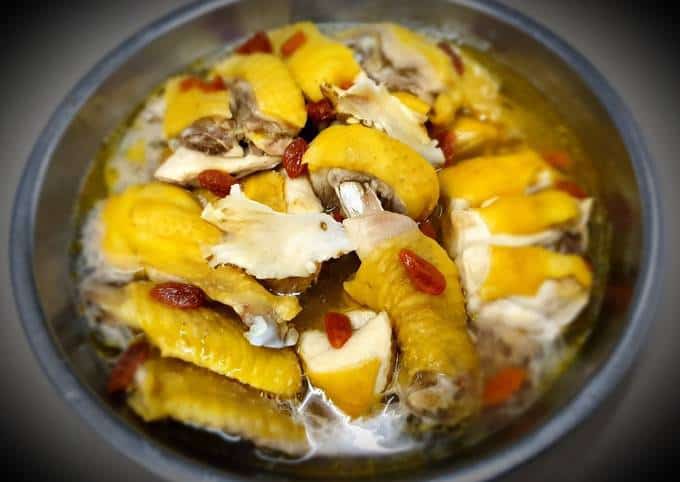 When chickens are slaughtered for food, they have their heads severed from their bodies.

This permits them to bleed out rapidly without the risk of blood clots developing within their bodies. The genetic makeup of a chicken and the food it consumes on a daily basis are two variables that might cause its skin to become yellow. The skin and occasionally the meat of chickens with genes from the grey jungle fowl have a yellowish tint.

Chickens fed high-carotene diets such as maize, marigold, paprika, and other carotene-rich foods will get that color on their skin eventually. One thing is certain: yellow skin on chicken flesh isn’t a bad thing as long as it doesn’t smell like decomposing meat or contains a lot of blood. Let’s take a deeper look at the two elements that determine whether or not a chicken’s skin will become yellow.

The chicken feed may contain corn and grass

If your chicken is fed a diet rich in corn and grasses, then this might explain why the chicken’s skin turns yellow. Corn contains beta-carotene which converts into vitamin A when exposed to air. Grass contains chlorophyll which gives off green pigment when exposed to sunlight.

When these plants are eaten by chickens, they convert those nutrients into yellow pigmentation.

The most important aspect is the food that the chicken consumes on a daily basis. Corn, fishmeal, and cereals are common ingredients in the diets of many hens. This provides them with a sufficient supply of protein, carbs, fiber, and minerals, allowing them to develop and produce healthy eggs.

Corn has the function of bringing a yellow color into the egg yolk, in addition to fattening the hens. Customers believe the egg to be better if the yolk is yellow. To make their yolks closer to an orange hue, some people add a pinch of paprika. Returning to the skin, a high-corn diet can alter the color of the skin and even the meat of the chicken. The more maize a bird consumes, the more probable it is for its skin to become yellow. Chickens fed wholly (or mainly) maize have the most golden skin.

There should be a label on the chicken meat packaging stating whether the bird was corn-fed or not. The yellow tint can also impact fat, giving it an unappealing yellow color. If your chicken’s skin has a definite yellow tint, don’t be alarmed. Like any other chicken, it may be fried or roasted.

Why chicken are fed corn

Chicken farmers use corn because it helps increase weight gain. They also use it to help prevent leg problems such as lameness. In fact, corn is used so much that it makes up over half of all animal feeds. 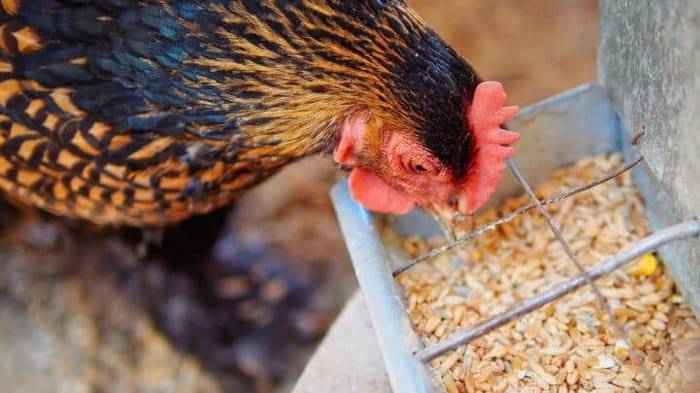 The maize industry is supported by the government, at least in the United States. Farmers who wish to feed their animals, including hens, may do so for a very low price. Corn kernels are generally given to chickens, whereas stalks and husks are given to cattle. So it’s a low-cost feed that does the job. Let’s look at the second reason why your chicken’s skin is yellow.

In nature, birds have feathers colored red, blue, black, white, brown, etc., depending on where they live. These colors come from different genes. For example, the gene responsible for producing dark plumage comes from the wild ancestors of domestic turkeys.

When domesticated, these birds were bred to grow faster than their wild counterparts. As a result, they lost their ability to fly and became flightless. Their wings turned grayish-white.

These two birds account for the majority of the present chicken population’s genetic heritage. Under all those feathers, the grey junglefowl is clearly yellow, especially on the legs. The grey gene is present in some form in every breed of chicken now marketed. Those that have this bird as an ancestor will be more likely to acquire yellow skin.

Farm-raised, healthy chickens had a yellow tinge to their skin

If you’ve ever seen pictures of farm-raised chickens, you know that they’re often quite pale. This is due to genetics. Most commercial breeds lack pigment cells in their skin. That means that when exposed to sunlight, the skin turns pink rather quickly.

So what happens when a hen spends her entire life indoors with little exposure to natural light? She doesn’t get enough melanin production, resulting in a lighter shade of yellow. Now it’s time to talk about customer expectations. Chickens used to be farm animals that would roam the farmland and eat everything they could find. Corn, grass, insects, worms, and everything else you can think of. This chicken had lots of activity and got to see the sun and the sky. And it was usually tinted with yellow.

We don’t know whether this was true or not. True, farm-raised chickens have yellowish skin, but they aren’t butchered as early as those on commercial farms. People, on the other hand, connect a yellow-skinned chicken with a farm, healthy feed, and fowl activity. Not everyone believes this, but enough people do to keep the idea alive. You might be wondering why no one just feeds grain to their chickens all the time. Well, it depends on what each producer considers to be worth the effort.

Corn feed is, in fact, quite inexpensive, but it also quickly fattens hens. They expand faster and, in some ways, better for consumers. Not all farmers agree with this, and not all corn is inexpensive.

In conclusion, there are several reasons why your chicken may look like she has yellow skin:

1) Her diet consists mostly of corn.

2) She spent her whole life inside without any direct contact with the outdoors.

3) She wasn’t fed properly during growth.

4) She didn’t receive proper care after being sold.

I hope this article was useful and informative and helped you with all your food curiosities.

Have you ever wondered why some chips taste good and others don’t? Sometimes they just don’t seem to be cooked at the same temperature. Well, I was looking into this recently, and what I found surprised me. There are several reasons why food might spoil or go bad before its expiration date. One of these…

Do you ever wonder if something is possible? Or if there’s anything you can’t do? We live in a world where we think we can do anything. We believe that we can achieve whatever we set our minds to. However, sometimes life throws us curve balls. Sometimes we don’t get what we want. In this…

Pancakes are delicious breakfast food. They are also very versatile. You can eat them plain or add toppings such as fruit, nuts, chocolate chips, etc. The question is, how long does a pancake last in the refrigerator?You probably already know that pancakes don’t last forever in the freezer. In fact, they usually freeze solid within…

Other FAQs about Coffee which you may be interested in. Coffee is a beverage that is consumed worldwide. It is prepared from coffee beans, which are roasted and ground into a fine powder. This powder is then brewed using hot water. Coffee is usually served hot but can also be served cold. Coffee contains caffeine,…

Hygiene is important Hygiene is very important for any business. It is not only about cleanliness but also about maintaining good hygiene standards. Cleaning is essential to maintain a hygienic environment. This is because dirty environments promote the growth of bacteria and viruses. Therefore, cleaning is necessary to ensure that the environment remains healthy. Cleaning…

When disaster strikes, you don’t want to be stuck without food or water. In such situations, you need to rely on your kitchen appliances. Which is the best emergency stove?Stoves come in various shapes and sizes. Some are designed to cook large quantities of food at once, while others are meant to prepare smaller meals….