Milk is a liquid food product produced by mammals such as cows, goats, sheep, buffalo, camels, yaks, water buffalo, and reindeer. It is also known as "cow’s milk" or "dairy". Milk has been used as a beverage since ancient times.

Milk is an essential part of a healthy diet. It provides nutrients that are needed for growth and development, including protein, calcium, vitamin D, riboflavin, potassium, phosphorus, magnesium, zinc, iron, iodine, and selenium.

Milk contains lactose, a sugar that is broken down into glucose during digestion. Lactose intolerance occurs when the body cannot digest lactose. People who are lactose intolerant often suffer stomach cramps after drinking milk. Raw milk contains bacteria that can cause illness if consumed. This is why milk is pasteurized before being sold to consumers.

Pasteurization kills off harmful bacteria while preserving the nutritional value of milk. This process also makes milk safer to drink because it prevents the growth of dangerous pathogens.

Why is milk pasteurized?

The main reason for pasteurizing milk is safety. When raw milk comes in contact with air, microorganisms grow rapidly. These organisms may be present on your hands, utensils, equipment, packaging materials, etc., which could contaminate the milk. 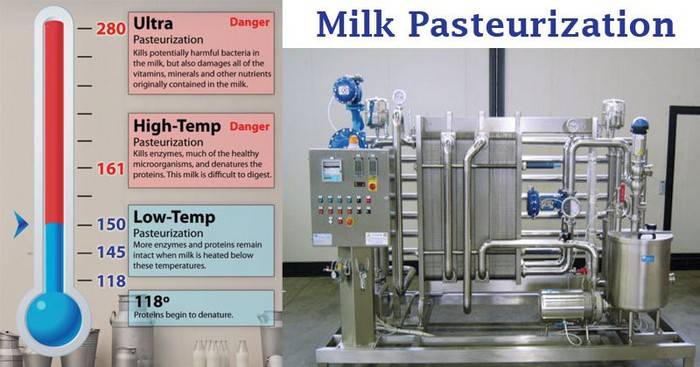 If you consume contaminated milk, you risk getting sick from bacterial infections like diarrhea, vomiting, fever, ear infection, pneumonia, meningitis, urinary tract infection, blood poisoning, and even death. In addition, some people have allergies to certain types of bacteria found in unpasteurized milk. If they accidentally ingest these allergens, their immune system will react against them causing severe allergic reactions.

Pasteurization destroys most pathogenic microbes but does not destroy all of them. Therefore, there still remains a small chance of contracting illnesses caused by other kinds of germs. However, this risk is very low compared to consuming unpasteurized milk.

Learn More:  What does milk do in a cake?

Unpasteurized dairy products contain more than 100 different strains of bacteria per milliliter. Some of these bacteria include:

These bacteria can make you ill if ingested. They can enter through cuts in the mouth, nose, eyes, ears, vagina, rectum, urethra, skin, wounds, open sores, and any mucous membranes. You can get infected without knowing it. Symptoms usually appear within 2 weeks of exposure. Some people develop foodborne diseases such as salmonellosis, campylobacteriosis or brucellosis. Other symptoms include abdominal pain, nausea, headache, dizziness, muscle aches, joint pains, chills, loss of appetite, fatigue, weakness, weight loss, and dehydration.

In rare cases, serious complications occur. There are some places where selling raw milk is illegal For example, California has banned sales of raw milk due to concerns about public health.

How do I know whether my milk was pasteurized?

You should always check the label on the container of milk you buy. It must say "UHT" or "Pasteurized". Also, look closely at the expiration date. Most stores sell milk that expires no later than 6 months after purchase.

When milk is heated to 161° F for 10 seconds, its enzymes break down into smaller molecules making it easier for our bodies to digest. This process also kills harmful bacteria. 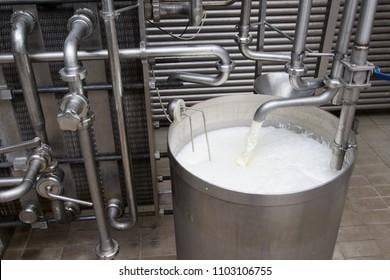 The USDA recommends that consumers heat milk to 185 °F for 3 seconds before consumption. Milk is one of the safest foods we eat because it contains less fat and cholesterol than meat. But when milk gets old, it starts losing nutrients. When milk goes bad, it becomes sour and tastes bitter. If your milk turns sour, throw out the whole batch!

Milk is made from cow’s milk which comes from cows’ mammary glands. Cows have four teats located near their rear end. Each pair produces approximately 1 quart of milk every 24 hours. After milking, the first step in processing involves separating the cream from the skimmed milk. Skimmed milk is then cooled and stored until needed.

There are 4 types of pasteurization:

This method heats milk to 280 degrees Fahrenheit for only two seconds. This temperature destroys all pathogens including E.coli 0157:H7.

Heating milk to 270 degrees Fahrenheit for five seconds makes it sterile by killing most pathogenic organisms. However, this does not destroy viruses like the hepatitis A virus.

3) HHP: High-pressure steam cooks milk for three minutes at 212 degrees Fahrenheit. This treatment eliminates almost all bacterial contamination but may cause slight discoloration of the product.

Is there anything else I need to be aware of with pasteurized milk?

So why would anyone want to consume something that isn’t healthy? Because many people believe that pasteurized milk doesn’t contain enough vitamins and minerals. That simply isn’t true.

Many people think they can tell if milk has been processed using either of these methods.

Learn More:  Can you eat fish and ice cream together?

If you’re looking for a good source of calcium, try low-fat dairy products such as yogurt, cheese, or fortified soy beverages. These sources provide about half the amount of calcium found in regular milk.

Can you boil pasteurized milk?

Yes, you can boil pasteurized milk just like any other food. Boiling kills bacteria and removes some of the vitamin B12. You should never use boiled milk on cereal though; boiling changes its texture.

Pasteurized milk is safe to drink. It’s important to remember that even though it looks white, it still retains much of the nutritional value of fresh milk. So enjoy your glass of warm milk without worrying too much about what kind of container it came in.

Eggs are a staple food around the world. They are nutritious, affordable, versatile, and delicious. But they also come with risks. If you don’t know how to tell if an egg is rotten or not, then you might be putting yourself at risk.Eggs are a great source of protein and nutrients. They are also very…

Tea has become a part of our daily lives. Whether it’s hot or cold, black or green, it’s always served at home or in cafes. But did you know that there are over 100 types of tea? And each type comes in various flavours, shapes, sizes, and even colours. How much tea should I drink…

Do you ever wonder if something has dairy in it? Do you find yourself constantly checking labels? If you want to eat healthily but don’t want to give up cheese then you need to read this! In this article, we will answer the following question: Does bread have dairy? We will talk about milk as…

Pierogies are delicious Polish dumplings filled with cheese or meat. They are usually served during Christmas time and Easter. How do you freeze them?Pierogis are typically boiled before freezing. The boiling process helps to remove excess moisture from the dough. This makes them easier to store and reheat later.You can freeze pierogis by placing them…

Herbalife LiftOff is a supplement that claims to boost metabolism, burn fat, reduce hunger and increase energy levels. Is it really effective or is it another scam? Herbalife LiftOff contains ingredients such as green tea extract, guarana, chromium picolinate, caffeine, yohimbine HCL, L-carnitine, B vitamins, and herbs like ginseng and ashwagandha. The company says these…