Milk is one of the things that people just grow up with, without really thinking about it. Most people know what milk tastes like, what it smells like, and so on.

We’ve always known that milk is white or off-white. But why is milk white ? And one more crucial thing, why is it white and the butter is yellow ? We are going to tackle this topic and give you the answers you are looking for. 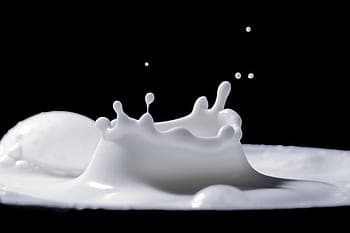 Why is milk white ?

The answer to this question has a lot to do with light. When we look at milk in its natural state there’s not much color to speak of. It looks almost grayish. This is because most of the particles inside milk have very small sizes. These tiny particles scatter blue light but they absorb red light. So when we see milk, we’re seeing mostly scattered blue light.

Milk looks white because of the different fat and protein molecules reflecting the entire light spectrum. Milk is mostly water but it also contains fat and a few calories. The light reflected throughout all of the milk is the same as the one that is scattered evenly through the whey/liquid.

The other reason is the butterfat in the milk is opaque. When butter is heated, it becomes transparent. You can’t see through it when it’s solid. The same thing happens in milk, except the particles are very small and you can’t see them with the naked eye.

But you can see the effect on the liquid by the white light reflected back.

Why is milk opaque ? 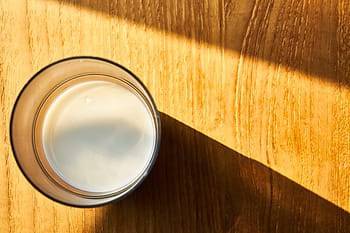 Milk is completely opaque, which makes it possible for it to reflect white light so evenly. Milk is opaque because it is a suspension, meaning all of the molecules are evenly dispersed, while not dissolving into the liquid.

Milk has tiny fat and protein molecules that are evenly dispersed, making the milk appear opaque. Try to remove a good option of the fat and protein in the milk. It would end up being a semi-translucent liquid that is known as whey.

When you look through it, you will see that it is translucent. If you put a few drops of milk into a glass of water, you would notice it was cloudy, but you could see through it.

Why is milk white and butter yellow ?

Butter is yellow due to the presence of a pigment called beta carotene. That is found in most plants and food, including grass, corn, and other grains which can be fed to cows. Beta Carotene gives foods their bright colors such as carrots, sweet potatoes, squash, tomatoes, etc.

Beta carotene is an orange colored compound made from two oxygen atoms bonded together with four carbon atoms. In nature, these compounds are usually bound to proteins, fats, carbohydrates, vitamins, minerals, pigments, hormones, enzymes, and many others.

In order to make butter yellow, scientists added beta carotene to the cream before churning out the butter. They did this because the beta carotene had been removed during processing.

The fat and cream could be seen at the top of the milk bottle before the milk was pasteurized. The milk was raw, unprocessed and spoiled in a couple of days.

Today the milk is homogenized, and then pasteurized. Homogenized milk is run through a fine sieve to make all the fat particles small so they don’t clump together and spread evenly in the milk.

This ensures that milk stays stable for weeks, even months, if it is properly packaged and stored. Pasteurization means the milk is boiled for a short time to kill any bacteria that may try to grow in the milk carton. It is a measure to keep milk stable.

Does milk contain blood and pus ?

No, milk does not contain any blood or pus. However, if your cow gets sick, she may produce some mucus. Mucous is just like milk; it’s clear and milky white. If the cow was sick and had an infection in her udder, it could happen. In that case, the cow is treated for its condition after it’s not milked. Milk companies or farmers immediately discard milk that may be off.

Why does fresh, raw milk smell ?

There is a smell of fresh, raw milk. Milk that has come from the udder will have the cow’s smell in it, the same way goat/sheep meat will taste the way the animal smells.

There’s nothing bad about a fresh, raw milk that smells like a cow. It’s a sign that the milk is fresh and hasn’t been boiled yet. For the past few decades, we’ve gotten so used to carton milk, that we forgot that cows smell.

Yes, they do. All animals smell, that’s fine. If you were to milk a goat, then guess what? The milk would smell goatee and taste goaty at the same time.

What causes the odor in milk?

It comes from bacteria growing inside the udders. Bacteria grow naturally in milk. There are different types of bacteria that live in milk: lactic acid producing bacteria, coliform bacteria, streptococci, staphylococcus, enteric bacillus, and yeast. These bacteria help break down lactose sugars in milk. This process helps create more energy for the calf. They are not harmful unless there is too much growth. When the amount of bacteria grows too high, it creates a sour flavor in the milk.

Rabies is a deadly virus that affects animals such as dogs, cats, bats, foxes, raccoons, skunks, wolves, coyotes, and bats. If you come into contact with an infected animal, you could get sick too. # If you see an injured dog, cat, bat, or other wild animal, don’t approach it! Call 911 immediately. Do NOT…

Vinegar has been around since ancient times. In fact, it was mentioned in the Bible. Vinegar is also known for its health benefits. There are various types of vinegars available in the market today. Which one should you choose?Vinaigrette is a basic salad dressing that consists of oil, vinegar, salt, pepper, and other seasonings. The…

Gooseberry is a fruit that grows in bushes and trees. It has a sweet taste and is often used in jams and jellies. Gooseberries are also known as “wild strawberries” because they are native to Europe and Asia. Gooseberries are rich in vitamin C, fiber, potassium, manganese, copper, iron, magnesium, phosphorus, zinc, and folate. They…

Do you ever wonder how to get rid of fishy aftertaste in your food? There’s no need to throw out your favorite condiment! Fish sauce has been used for centuries in Asian cuisine. It adds flavor and aroma to dishes, but also contains high levels of sodium. If you want to remove the fishy taste,…

Have you ever wondered why some foods are packaged in boxes or bags instead of cans? Are they really healthier? Packaged lunch meals are convenient, but are they always better for us? There are several reasons why manufacturers package food in plastic containers. For example, they want to keep the food fresh longer, prevent contamination…

Bread dough is a mixture of flour, water, yeast, salt, and other ingredients. It’s used to make bread. The process of making bread involves mixing the ingredients together, kneading the dough until it becomes elastic, then letting it rise. When you buy bread at the store, the first thing you’ll notice is that it looks…