Onions are a member of the lily family. They are used in cooking and also have medicinal properties. Onions contain sulfur compounds that are known to fight bacteria and viruses.

They are also high in vitamin C and potassium. These nutrients help keep your immune system strong and healthy. The onion is one of nature’s most powerful healing foods, which makes it an excellent choice for anyone who wants to improve their health or prevent illness.

Have you ever wondered why onions have such a strong flavor? There has to be something that distinguishes them from the vegetarian crows. And we have a sneaky hunch that whatever makes them smell so powerful is also what makes them taste so good. So, what makes onions so powerful? What is it about them that makes us cry? And how do you get rid of the onion odor after you’ve cooked them? Let’s have a look.

Contents show
1 Why are onions so strong?
1.1 Allium plants contain sulfur.
1.2 Not all onions cultivars are the same
1.3 Why do certain onions cause us to cry while others do not?
2 How can you avoid crying because of onions?
3 How to tone down an onion?
3.1 Related Posts

Why are onions so strong?

The first thing to know about onions is that they’re not just any old vegetable. In fact, they belong to the same plant family as garlic, leeks, chives, shallots, and spring onions. 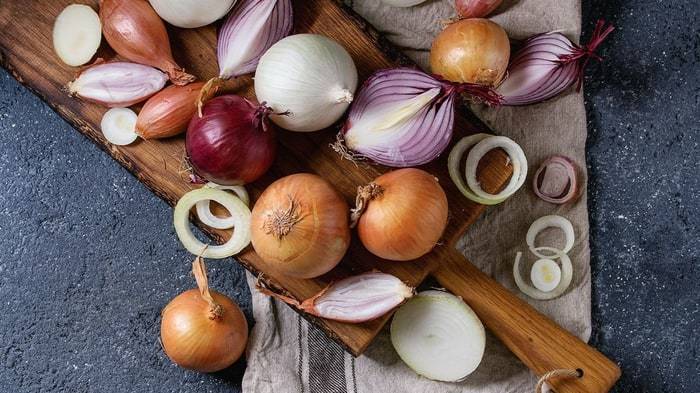 All these vegetables share some common characteristics: they all grow underground; they produce flowers above ground, and they store food inside themselves. But there’s more than meets the eye when it comes to this group of plants.

Because onions contain a lot of sulfur derivates such thiosulfinates and thiosulfonates, they have a strong flavor and fragrance. Sulfur derivates emerge as a result of a complicated chemical process that begins with the cell wall of onions being damaged by chopping, crushing, and frying.

Older onions, such as those that are fully ripe and mature, have the maximum concentration and hence have the strongest aroma and flavor. Because sulfur has such a strong odor for humans, onions will smell and taste extremely pungent. It’s similar to how broccoli, cabbage, and cauliflower work.

In addition to onions, other members of the Allium genus include garlic, leek, scallion, and chive. Like onions, they all contain sulfurous compounds called thiols. Thiols give off a very distinctive onion smell and flavor.

Thiols are found in higher concentrations in young, unripe fruit and vegetables. The Allium genus includes onions as well as other plants. Garlic, shallots, scallions, chives, leeks, and other species belong to this genus. Sulfur-based molecules are present in all of them. This is due to the fact that as a genus, they excel in absorbing specific nutrients from the soil in which they are grown. There are just a few soil types that contain no sulfur at all.

You’d obtain a non-pungent onion if you planned an onion in a fully sulfur-free environment. We’re not sure, but we believe this will significantly diminish the taste. Of course, you may acquire sulfur-rich soil, which will result in extremely pungent onions, garlic, shallots, leeks, and other vegetables.

Not all onions cultivars are the same

Onion varieties differ greatly in their strength. Some are milder while others are stronger. They vary according to the type of soil where they were cultivated. 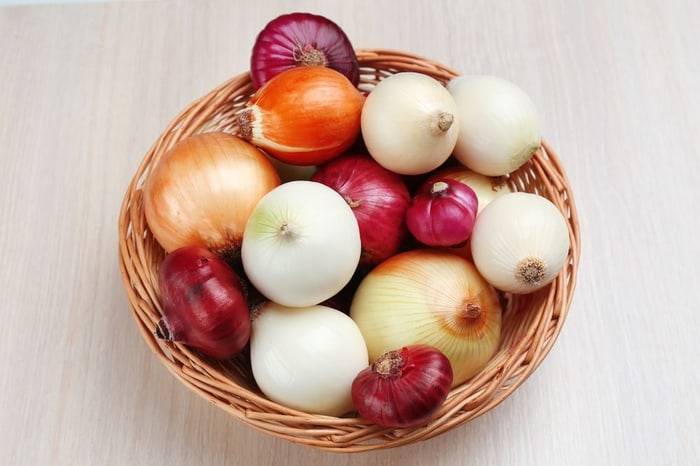 Some onions are bred specifically for cooking purposes. These are usually referred to as "cooking" or "table" onions. Their purpose is to provide a sweet, mellow flavor during preparation. Other onions are bred for eating raw. These are known as "eating" onions because they don’t need much heat before becoming edible.

Onions get their strength from the soil they’re grown in (sulfur concentration) and the cultivar they’re planted with. White and yellow onions, for example, are the strongest and most aromatic of the lot.

They’re also the most prevalent, and they’re also referred to as "store onions." These are the ones that have been allowed to fully develop underground before being kept for several weeks without decomposing. Red onions, on the other hand, have a milder aroma but might be sharper and spicier. They’re best eaten fresh, but you can absolutely prepare them as well.

Why do certain onions cause us to cry while others do not?

The reason why certain onions cause tears when cut into is because of their high content of quinine alkaloids. Quinine is one of the main active ingredients responsible for the bitter taste of cinchona bark. Cinchona bark was used by Europeans to treat malaria until it became apparent that it could lead to hallucinations.

Quinine is also what gives coffee beans their bitterness. Coffee contains caffeine, which causes people to feel jittery and anxious. When onions are sliced, they produce syn-propanediol-S-oxide, which is then released into the air as small droplets, making our eyes wet (like a spray). When our eyes are irritated by an aerosol, we generate tears to flush the irritant out. The problem is that when you chop more onions, you produce more aerosol.

How can you avoid crying because of onions?

Onions are very sensitive to heat. They get hot and start to sweat, which causes tears. To prevent this, you can either cut off the top of the onion or peel it. Peeling the onion will remove the outer layer of skin, which is the part that sweats. 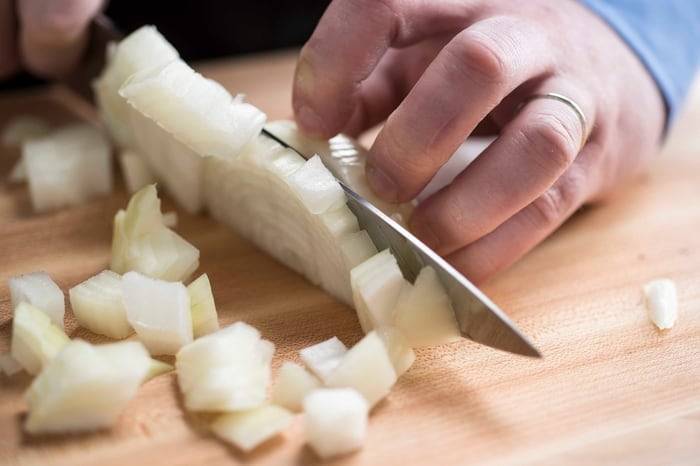 It is primarily the onion juice that you cut into the root and it is the milky stuff. If you want the juice to cease emitting fumes in your eyes, you have to get rid of or dilute it.

First, the onion and the knife would be rinsed before you began cutting it. Every few cuts, rinse the knife. Thus the onion has enough water to dilute the juice, and thank you for the eyes. However, it will not stop a whole onion, once you put it in a pot and start to slick the next one it will begin to smell.

And here’s the second alternative, put a cover on the onions! Though you only cut 10 minutes, even if the pot is farther away, the smoke will reach you.

A third method is available, however, not many people do it because you can’t regulate the cut easily. You can attempt underwater chopping of the onions. You have to set the cutting board in a large and shallow bowl. The water should be approximately one inch above the board. And in the water, on the board, you may chop the onion. This involves a lot of washing and draining the water in order to remove the onions.

How to tone down an onion?

If you don’t like the strong odor of onions, there are ways to reduce their strength. First, wash the onion thoroughly with cold running water. Then place it in a colander over a sink or basin. Let it sit overnight so all the moisture drains from the onion.

The next day, dry the onion completely using paper towels. Finally, store the dried onion in an airtight container. It won’t last long, though. Once opened, use within two days.

Soak the onion in ice-cold water while it is still fresh. This will aid in the release of some of its juices as well as the reduction of pungency. Alternatively, you may add vinegar to the water to extract even more. After rinsing, add to the pot.

Another alternative is to include a potato, which will absorb some of the taste. However, take in mind that it will impart a potato flavor. If the raw onion flavor is an issue, cook the meal for a longer time. The onions will begin to decompose and become sweet. They’ll still have some onion flavor, but it’ll be a lot softer and sweeter. In the worst-case situation, some of the onions can be removed from the meal while it’s cooking. The flavor will still be present, but it will be diminished.

In conclusion, I hope these tips help you when dealing with onions. Remember, they’re good for you; just make sure you know how to handle them properly.

Are bees attracted to honey? Yes, honey attracts bees. Honey is sweet and attractive to insects. It is used as a food source for many different types of animals. Bees are attracted to honey because it contains nectar, which is a sugary liquid produced by flowers. This liquid is stored in special glands called “honeycombs”…

Do you suffer from constipation? If yes, then you should read this article! Constipation is a condition where there is hard stool in the colon. This causes discomfort and pain. There are various reasons why someone might experience constipation. Some people have problems with their digestion while others have other health conditions such as diabetes….

Curry lasts longer in the fridge than other foods. How much time should you leave it before cooking? Curry is a spicy Indian dish that typically contains vegetables, meat or fish, and spices such as turmeric, cumin, coriander, ginger, garlic, and chili peppers. The spice mix varies from region to region. Curry is usually served…

Do you want to sing better? Do you want to improve your voice? If yes, then you need to drink tea! There are many types of teas out there but which ones are really effective? Which ones are worth drinking? What kind of benefits can you get from drinking tea? In this blog post I…

How to preserve quail eggs?Quail eggs are delicious treats that are often served at Easter time. They are also very nutritious and contain high amounts of protein, vitamin B12, and other nutrients.However, they are fragile and should be stored properly to ensure their freshness. If you want to enjoy them for longer periods of time,…